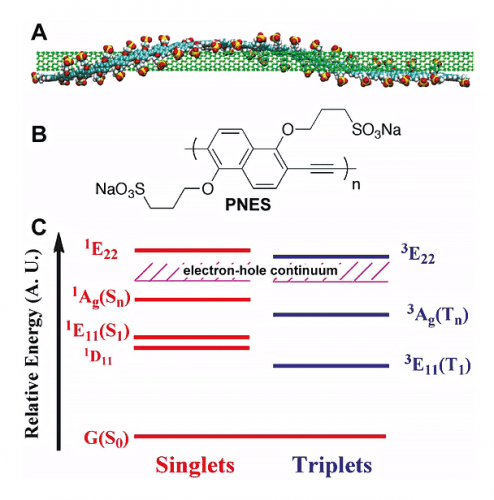 In this study, (6,5)-chirality enriched semiconducting SWCNTs that were helically wrapped by an aryleneethynylene polymer monolayer at periodic and constant morphology, were utilized. These polymer-wrapped SWNTs maintain uniform structure morphology in both D2O and DMSO solvents, and provide versatile constructs in which to probe nanotube triplet excited states. These SWCNT triplet states have lifetimes in the order of microseconds, differing vastly from the picosecond lifetimes characteristic of the well-known SWNT singlet states in these unique of 1-dimensional carbon-based nanostructures.

A previously unidentified transient absorption band at 1150 nm is shown to correspond to a SWNT T1arrow-rightTn transition; the lifetime of the SWNT triplet excited state was found to be 17.4 μs and 6.5 μs, respectively, in D2O and DMSO solvents when deaerated by Argon. Air saturated samples displayed much faster lifetimes in the presence of oxygen, a common indicator of a triplet state formation. 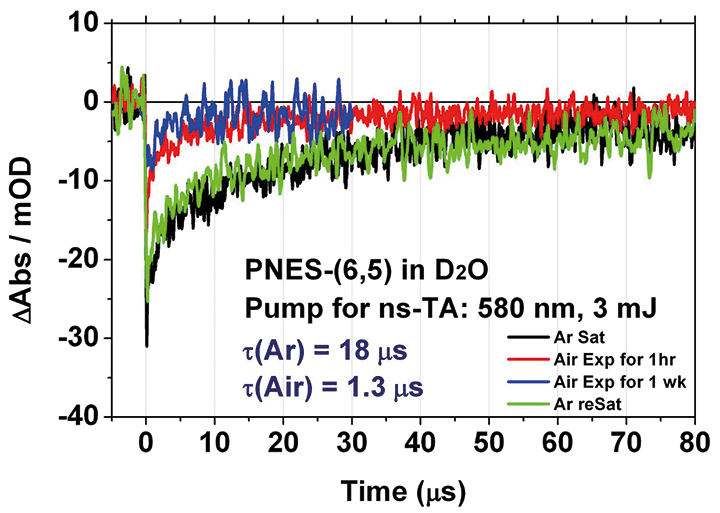 Figure 4: Triplet excited state emission lifetimes as a function of Argon or air saturation at 1000 nm for PNES-SWNTs in D2O.

The supramolecular PNES-SWNT constructs, along with sensitive NIR transient absorption detection of the Edinburgh Instruments LP980, allowed for the first measurements of the photogenerated carbon nanotube triplet state. SWNTs facilitate ballistic charge transport and fast singlet exciton migration over long distances and the experimental identification of the SWNT triplet excitation state significantly expands the scope of nanotube electron and energy migration reactions that can be exploited for electronic and photonic devices.

The LP980 spectrometer sets the standard for technical performance required in a premier research instrument, offering unsurpassed measurement capabilties across a broad range of chemical, physical and biological applications. If you are working with single walled carbon nanotubes and require information about how our LP980 Transient Absorption Spectrometer can help with your research, simply contact a member of our sales team at sales@edinst.com.