This intense light pulse creates short lived photo-excited intermediates such as excited states, radicals and ions. All these intermediates are generated in concentrations large enough for chemical and physical interaction to occur and for direct observation of the associated temporally changing absorption characteristics. These absorption changes are recorded using a spectrally continuous Xenon lamp (‘probe source’) forming the background in a single beam absorption spectrometer. The probe source is operated in a pulsed mode to enhance the photon flux for measurements in short time ranges. 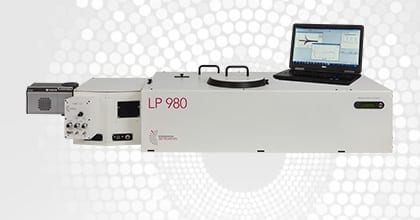 Liquids are usually measured in a cuvette with the pump beam and the probe beam overlapping orthogonally (transverse excitation). In gaseous samples the concentration of the participating molecules is much lower and a co-linear setup between the pump and probe beam is preferred to improve the signal to noise ratio. Film samples, powders and non transparent bulk samples are generally studied in a diffuse reflectance setup.

The sample being investigated is exposed to an intense laser pump pulse, which creates the transient species, and the probe source, which forms the background for the time dependant absorption measurement. For time scales in the microsecond and nanosecond range the required high background level of the probe light is created by the intense flash from the pulsed xenon lamp which – after some stabilisation period – reaches a sufficiently flat plateau.

The change in optical density, ΔOD, can then be analysed using exponential least squares fitting algorithms, resulting in transient lifetimes or rate constants.

To protect the sample against photobleaching by unnecessary radiation exposure between measurements and as a means to control background measurements, high speed shutters are operated to control the probe and laser beam prior to entering the sample. For laser induced emission measurements the probe shutter remains permanently closed.