Robust and reliable analytical methods are essential in the food industry to ensure that products are sold free of adulteration and safe for human consumption. Food crime is defined as ‘serious fraud and related criminality in food supply chains’.¹ This description covers a broad range of activities from theft to document fraud, and Raman spectroscopy can be useful in detecting the adulteration and substitution aspect of food crime. Raman spectroscopy’s unique fingerprint-like spectrum can be used for edible oil adulteration identification and reproducibly.

Edible oils are one of the main components of the human diet. They are found as ingredients in many foods, such as cakes and ice cream, and also used in everyday cooking. A common issue is edible oil adulteration of extra virgin olive oil (EVOO) with cheaper oils. Firstly, there is the commercial issue of falsely selling a product, but there can also be health implications resulting from food adulteration. In Spain, in 1981, fraudulent oil was sold causing a new condition termed toxic oil syndrome.² 20,000 people were affected, and 300 died within 20 months whilst officials tried to figure out the source of the new illness. It was determined to be caused by contaminated rapeseed oil, being sold by vendors as olive oil, which was intended for industrial use rather than human consumption.

Raman spectroscopy can be used for determining the degree of unsaturation in oils, assessing oxidation in vegetable oils, detection of adulteration in oils, and the determination of minor components in oils which would otherwise require prior separation for identification.³ Raman spectra of edible oils show well defined bands and therefore one can easily differentiate between different edible oils whilst also being able to detect added adulterants. This application note demonstrates the discriminatory power of Raman spectroscopy using the RMS1000 Raman Microscope and chemometric analysis of several edible oils and two adulterated EVOO samples. 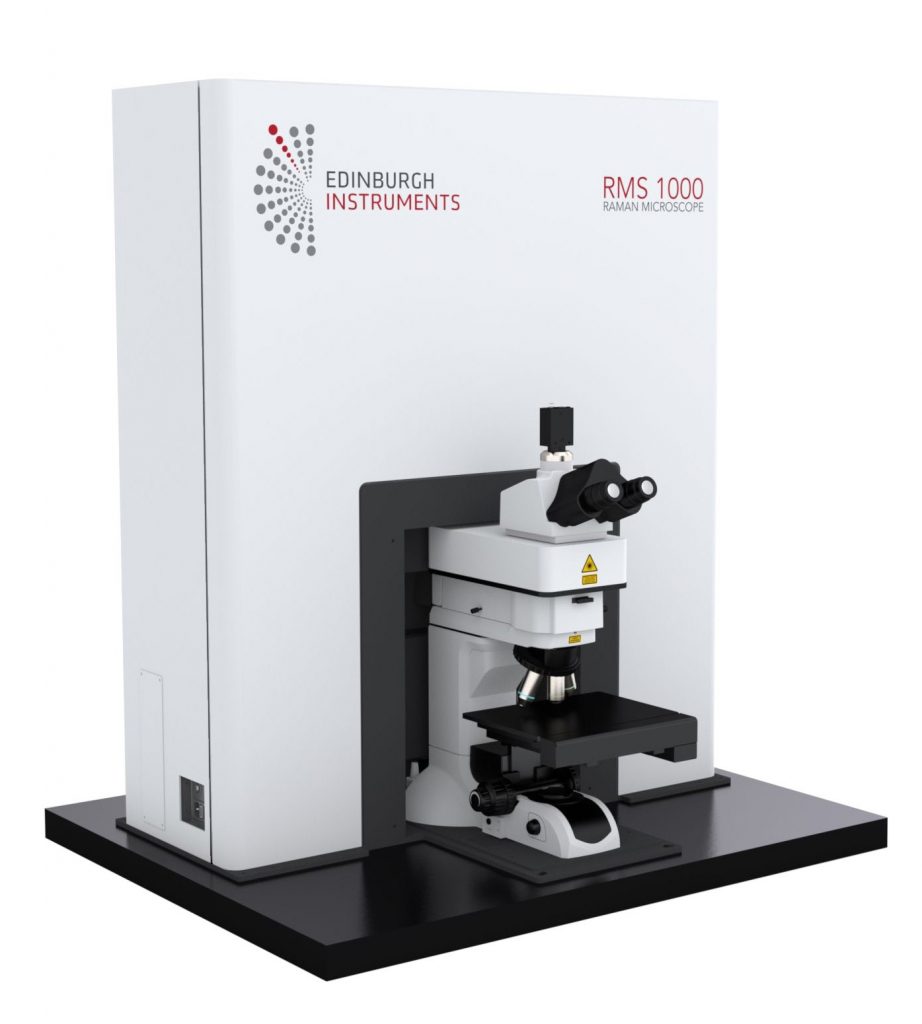 An RMS1000 Raman Microscope fitted with a cuvette holder was used with a 532 nm and a 785 nm laser to study the edible oil adulteration. The cuvette holder allows for easy spectral measurements of liquids using a x10 objective directly attached to the microscope and a standard cuvette. 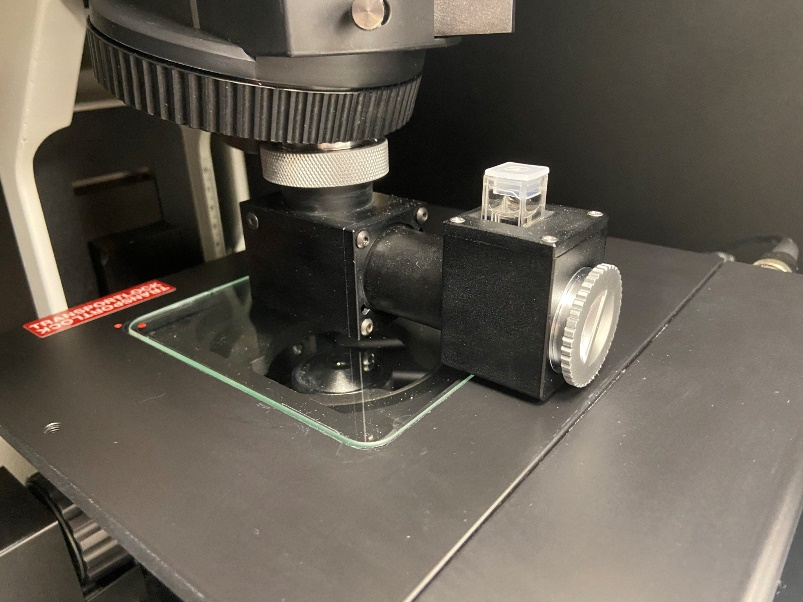 Oil identification
Spectra were acquired using both a 532 nm laser and a 785 nm laser. An example of a typical spectrum from olive oil with band assignments using 532 nm excitation is shown in Figure 3. The spectrum can be thought of as having two regions, the fingerprint region which accounts for the bands between 800-1800 cm-1 and the high wavenumber region covering 2800-3500 cm-1. The fingerprint region provides more detail and therefore is used for identification. 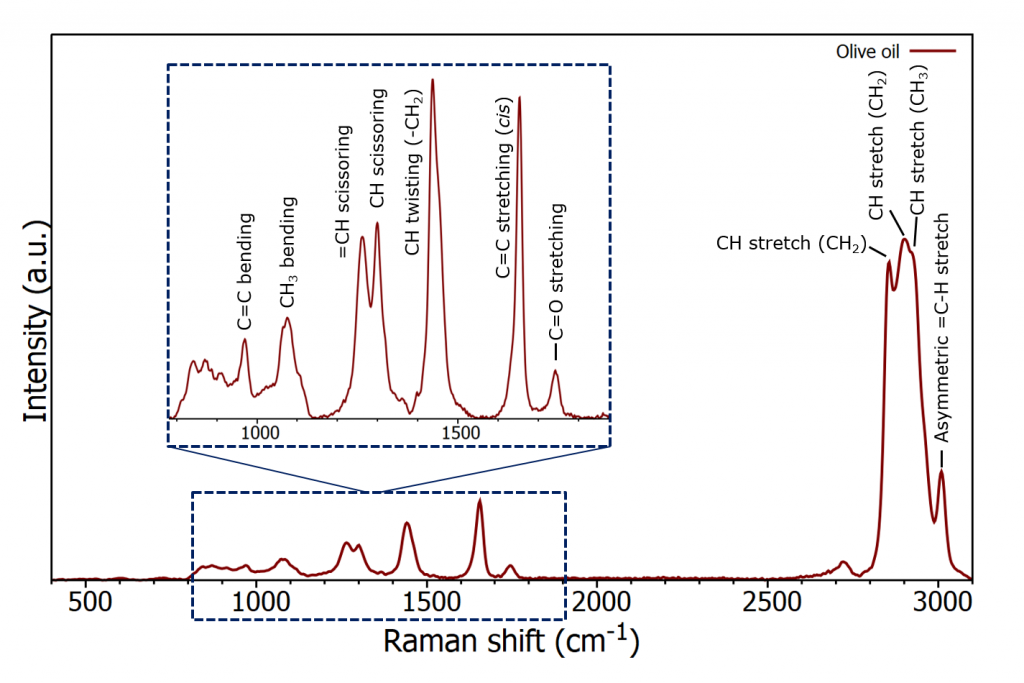 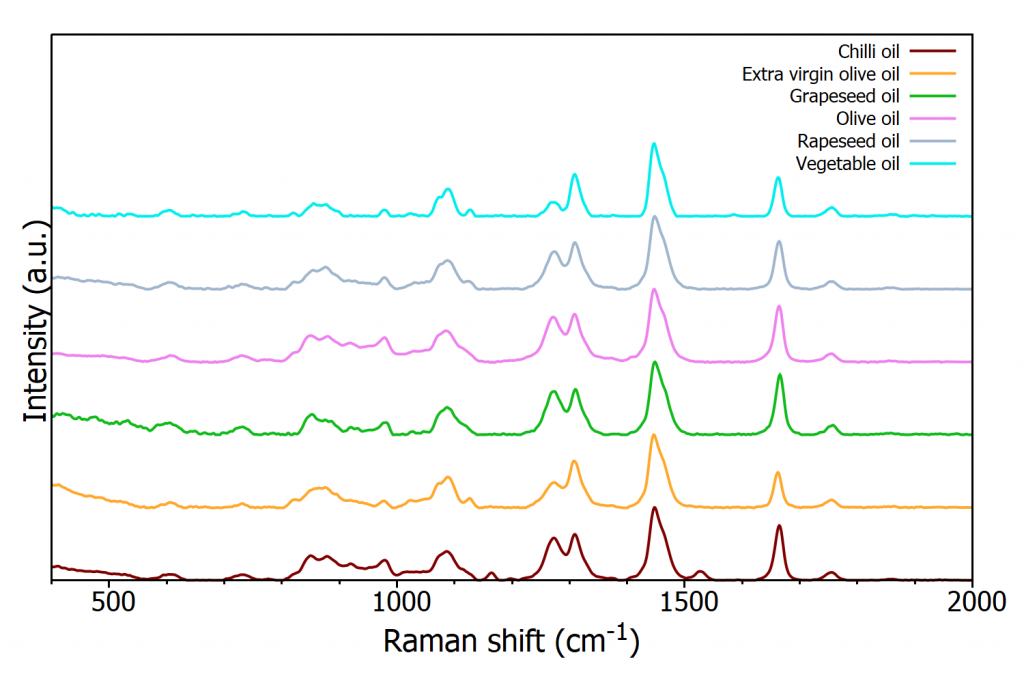 As can be seen in Figure 4, the spectra are extremely similar by eye and prove difficult to distinguish from a quick observation. Chemometric tools can be utilised to extract the distinguishing features of each spectrum.

For these oil samples, hierarchal cluster analysis (HCA) can easily provide obvious separation of the data. HCA’s output is a dendrogram which groups the data into clusters based on an algorithm, in this case Ward’s algorithm, and spectral distances were calculated using the Euclidian distance. Simply it can be thought of as a family tree representing the data with different levels of relatedness. Its an unsupervised technique meaning you don’t need to know how many clusters you have and therefore is unbiased. HCA works by determining the samples which are the most similar and working up the dendrogram until there is only one class.

For the six oil samples, five repeats were acquired giving a total of 30 spectra for the known oils’ dataset. Subsequently, two unknown oil samples were analysed, bringing the total number of spectra to 32. The data set was exported from Ramacle into the Eigenvector PLS toolbox where HCA was run. Figure 5 shows the output dendrogram from the HCA. The data clearly clusters into oil types, i.e. the five chilli oil samples all cluster into one group where chilli oil 1 represents the first of the five spectra acquired for the chilli oil sample. As well as clustering the six oil types together HCA can also be used to identify the two unknown samples. Unknown sample 1 clusters with olive oil, and therefore can be identified as olive oil, and unknown sample 2 can be identified as grapeseed oil. 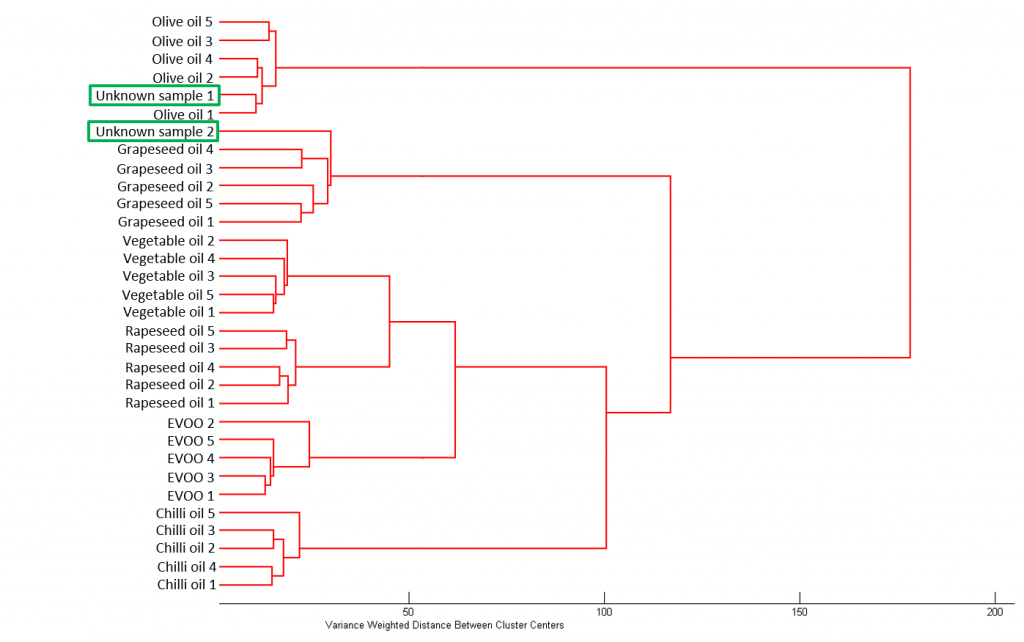 Adulterated oil sample
A sample of EVOO was mixed with olive oil and grapeseed oil separately to simulate two adulterated oil samples, both with a 50:50 ratio of EVOO to contaminant oil. Approximately 3 mL of each sample was pipetted into a cuvette and their Raman spectrum acquired, Figure 6. 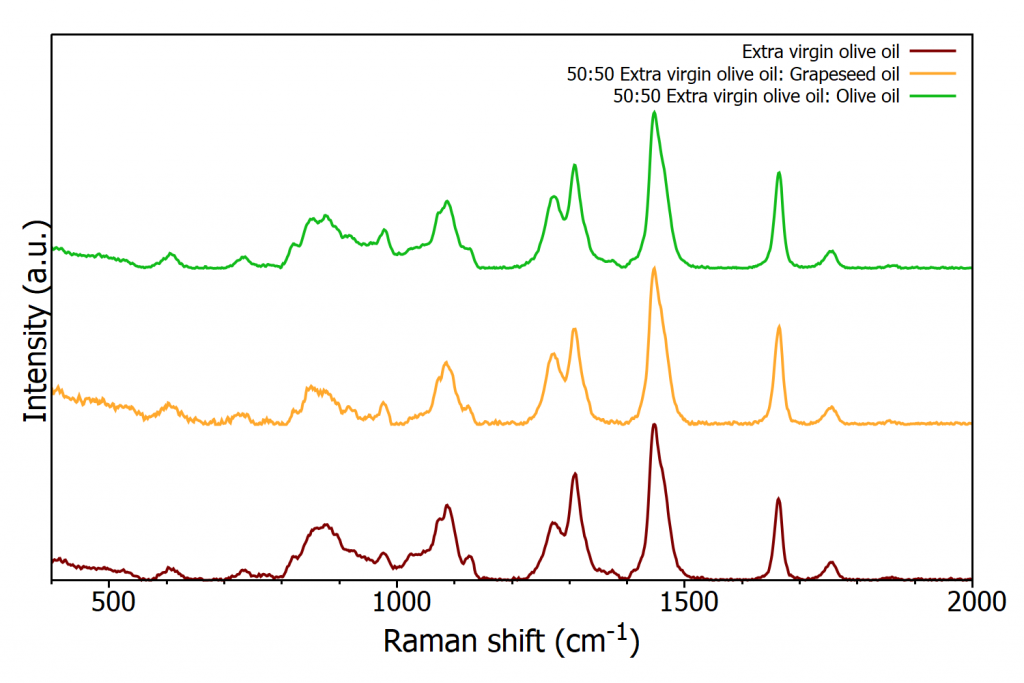 Figure 6: Raman spectra from a pure sample of EVOO and two adulterated samples

As before HCA was then used to distinguish between the samples, Figure 7. Using HCA on the Raman spectra produces distinct clusters between the oil samples, easily identifying the adulterated samples whilst also distinguishing between the two adulterated samples. Starting at the top of the dendrogram (right hand side of Figure 7) the first two clusters separates the samples into those containing grapeseed oil and the samples containing EVOO and olive oil. The addition of grapeseed oil to EVOO alters the spectrum such that the resulting sample is more similar in nature to grapeseed oil than EVOO. However, it does still prove spectrally different enough to grapeseed oil to form its own cluster. Within the cluster of olive oil and EVOO it can be seen that the adulterated EVOO sample with olive oil clusters more closely with EVOO than olive oil. 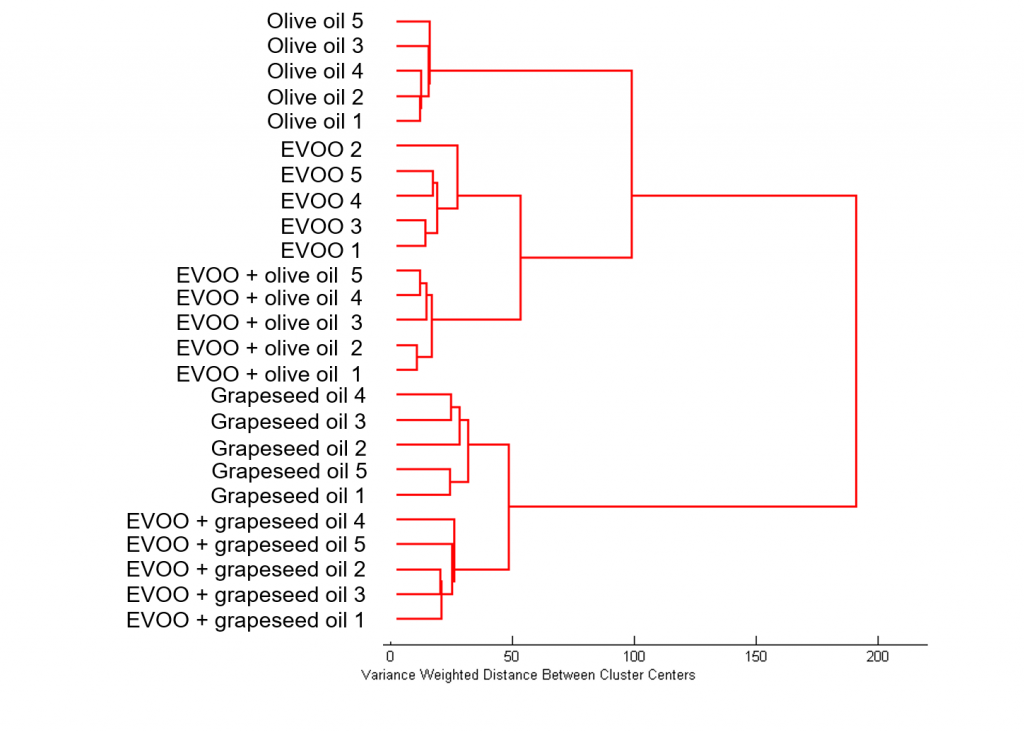 Food safety is vitally important to ensure that consumers are getting the products they think they are buying, and for keeping their health intact. In this application note, the RMS1000 Raman Microscope was used in combination with chemometric analysis to successfully identify edible oils. The HCA dendrograms clearly distinguish between oil types and adulterated samples showing how Raman spectroscopy is a useful analysis tool in food security.

Find out more about the RMS1000 Raman Microscope. If you would like to talk to one of our sales team and find out how the RMS1000 can be used within your own Raman research, please contact us. We’d be delight to help.