Triplet excited states in molecules and materials play an important role in many practical applications, from phosphorescent pigments to photodynamic therapy, and even photovoltaic solar cells. New materials that exhibit triplet state photochemistry are constantly under development, and understanding the lifetime and energy transfer processes of their triplet states is a fundamental step in their design and optimisation. In this application note, we demonstrate how transient absorption spectroscopy and temperature-dependent measurements can be employed to investigate and understand the nature of photoexcited triplet states of a molecule.

Triplet states are electronic states with two unpaired electrons with parallel spins in different molecular orbitals. Closed-shell molecules have a singlet state (opposite spin pair) as their ground state, with their triplet lying at higher energy. Figure 1 shows a Jablonski diagram representing the different energy levels for a classical molecular structure and the mechanisms for triplet state generation and deactivation. The ground state S0 has two electrons occupying its bonding orbital (B). Excitation of one electron into the antibonding (AB) orbital takes the molecule into its first excited singlet state S1. Transitions between states of the same spin multiplicity (singlet – singlet or triplet – triplet) are allowed by selection rules, but singlet – triplet transitions are spin forbidden. In some cases, the molecule can undergo intersystem crossing to a lower lying triplet (T1); this is favoured by molecules containing heavy atoms and paramagnetic species in solution.

Figure 1: Jablonski diagram of a molecule with singlet (S1) and triplet (T1) excited electronic states. Electronic configuration of its bonding (B) and antibonding (AB) orbitals is represented in green.

Relaxation of a triplet excited state can proceed via several routes. The molecule may decay to its ground singlet state emitting light, in a process known as phosphorescence. Intramolecular triplet-to-singlet relaxation without the emission of radiation may also take place. A further possibility is the interaction of the molecule with its external environment inducing relaxation to S0, or quenching, as shown in Figure 1 where oxygen is converted to its singlet state by a molecule in the T1 state.

Another process, not depicted in Figure 1, is triplet-triplet annihilation (TTA), where two triplet states react with each other to give a single singlet excited state, . TTA has many possible outcomes: S1 can decay via luminescence or internal conversion, or S0 and S1 can form a singlet excimer which then dissociates.

The different pathways discussed above make triplet photochemistry a complex subject to study, however, modern optical spectroscopy techniques excel at interrogating these excited state processes. Photoluminescence (PL) spectroscopy is a commonly used technique to probe triplet excited state lifetimes, but it is only effective when there is significant phosphorescence emission from the T1 → S0 transition. At room temperature non-radiative losses often outweigh the radiative phosphorescence decay pathway, so measurements at low temperature or using other techniques are required. An often-used alternative is nanosecond transient absorption (ns-TA) spectroscopy, which probes the triplet (T1 → Tn) absorption(s) as a function of time. By directly probing the concentration of the triplet as opposed to its luminescence, it is possible to study other decay pathways such as quenching and TTA processes. In addition, measurements in a cryostat may be performed to understand the temperature-dependent dynamics of the system.

In this application note we study the photogenerated triplet state of benzophenone by ns-TA and photoluminescence spectroscopy at different temperatures. Benzophenone (Figure 2) is an efficient triplet sensitiser thanks to its high (~100%) intersystem crossing yield. Its S1 state is generated by promoting an electron from a nonbonding orbital n into the π* orbital from the carbonyl group; hence the (n, π*) label in Figure 2. The higher excited state S2 arises from the π orbital in C=O, so it is a (π, π*) state. Intersystem crossing from S1 to T2 is very efficient because transitions between (n, π*) and (π, π*) states are highly favoured. This results in a large concentration of triplet states which can evolve via phosphorescence, non-radiative relaxation, or triplet-triplet annihilation (TTA) events. 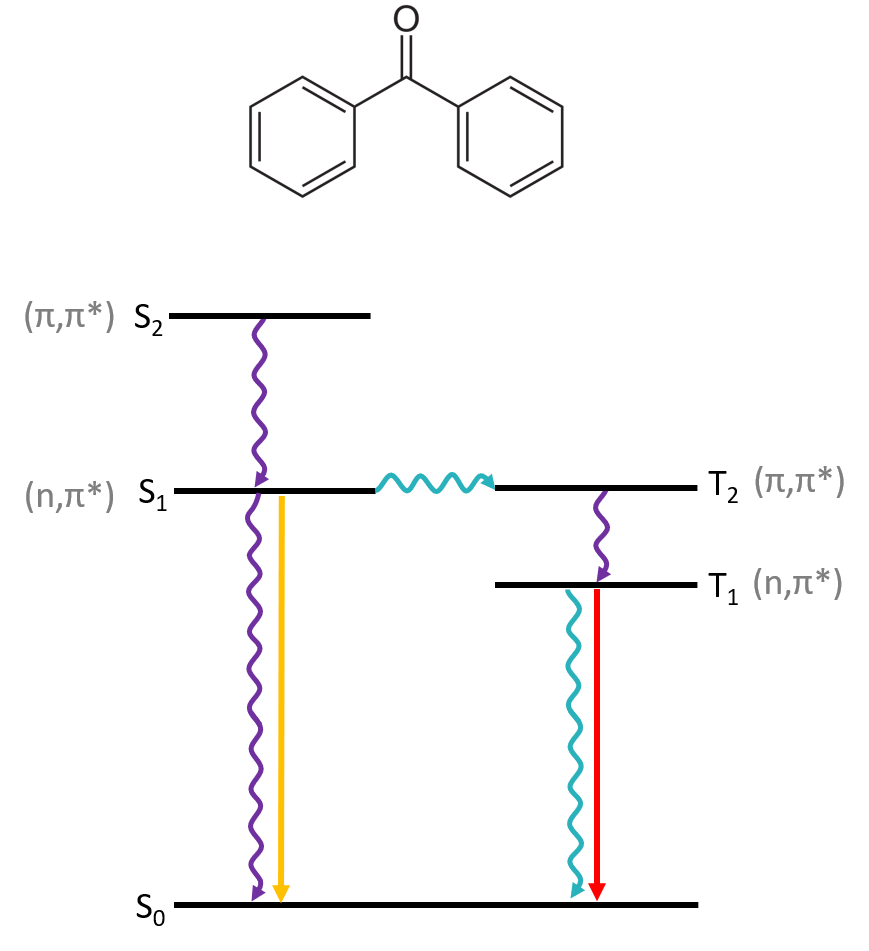 Films of PMMA containing benzophenone were deposited onto glass substrates by drop casting, and subsequently measured in the cryostat accessory of the Edinburgh Instruments LP980 Transient Absorption Spectrometer. The LP980 was equipped with a 355 nm pump laser (Litron Nano S), the standard high-intensity pulsed Xe lamp, and kinetic (PMT) and spectral (ICCD) detectors. Temperature maps of transient absorption were acquired by the L900 software, enabling the phosphorescence caused by the pump pulse to be automatically subtracted by the software.

A solution of benzophenone in a 4:1 ethanol/methanol mixture was measured in the liquid nitrogen Dewar accessory of the LP980, which enables measurements at room temperature and 77 K. Time-resolved photoluminescence spectra were acquired using the ICCD detector.

Temperature-dependent ns-TA spectra of benzophenone/PMMA films are shown in Figure 3. The ns-TA spectrum matches the absorption spectrum of the benzophenone triplet state reported in previous studies,1 and the intensity of the transient signal decreases markedly as the temperature increases. Relaxation mechanisms, such as collisional quenching by 1O2, are inhibited at low temperature, giving rise to excited triplet states that are longer lived at low temperatures and also providing a higher TA signal. 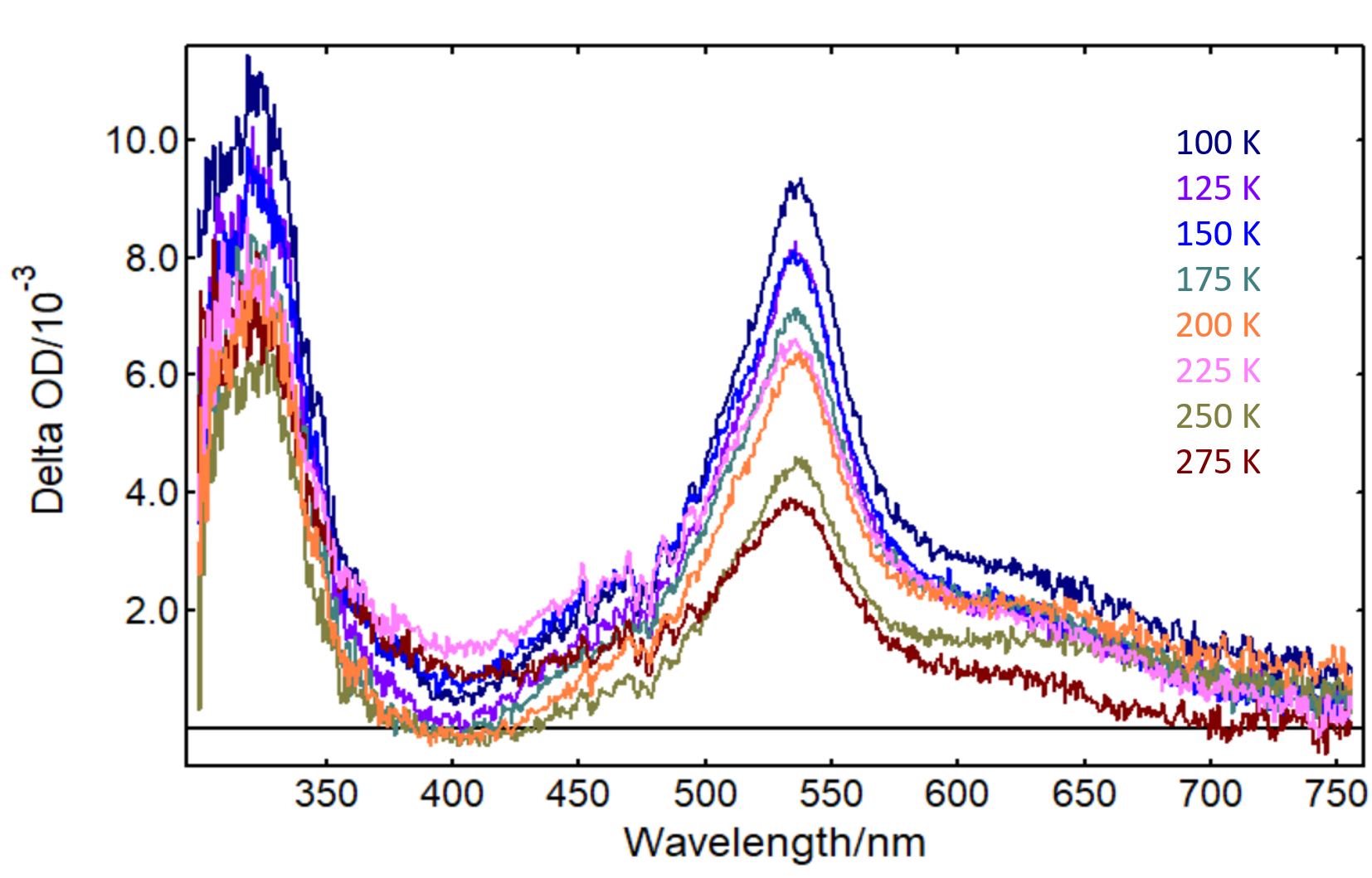 Single wavelength lifetime (kinetic) ns-TA measurements with a PMT detector provide further details on temperature-dependent triplet state lifetimes. Figure 4(a) presents kinetic ns-TA decays acquired in the LP980 at 530 nm, the peak of absorption by the triplet state of benzophenone. The millisecond-long lifetime becomes progressively shorter as the temperature increases, dropping to a few microseconds at room temperature.

The results in Figure 4(a) may be fitted to an exponential model to find the decay rate of the triplet. Second order triplet-triplet annihilation effects can potentially take place in PMMA matrices,2 however in this case a two-component first order model provided a good fit. The ns-TA decays were fitted to the following equation using L900:

In the above equation, τi is the lifetime of component i and Bi is a preexponential factor associated with said component. Figure 4(b) presents the lifetimes τ1 and τ2 obtained from the data in Figure 4a. The long component τ2 does not present an obvious trend, but τ1 shows a clear decrease with temperature. The slope in the τ1 plot changes at ~150 K, the onset of rotation of the α-methyl groups in PMMA.2 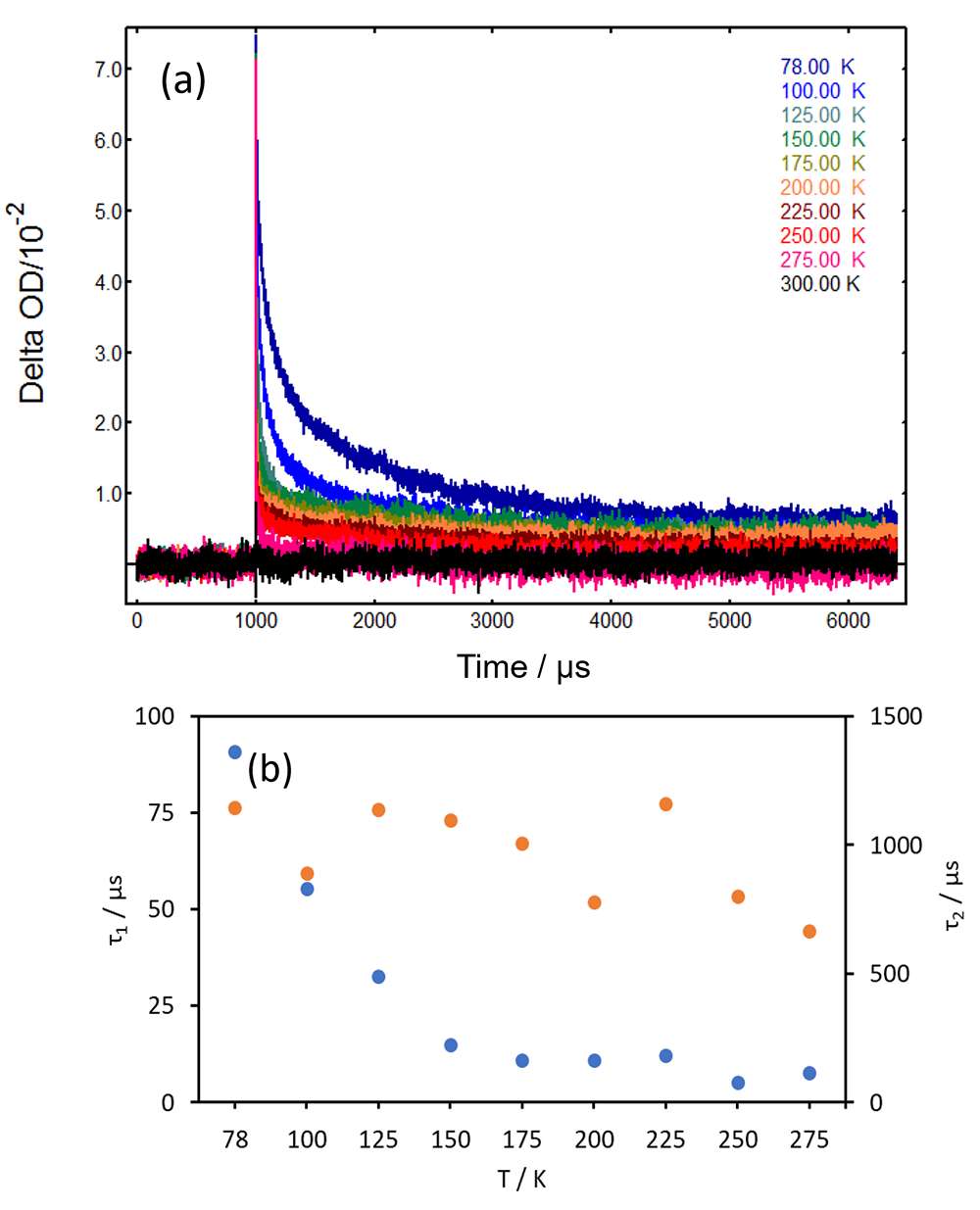 Figure 4: (a) ns-TA decays of benzophenone/PMMA as a function of temperature obtained in an LP980 Transient Absorption Spectrometer. λpump = 355 nm, Epump = 10 mJ/pulse, λprobe = 530 nm, Δλprobe = 5 nm, 50 averages. Temperature values indicated in the graph. (b) Lifetime values τ1 and τ2 obtained from a two-component exponential tail fit in the L900 software, plotted as a function of temperature. 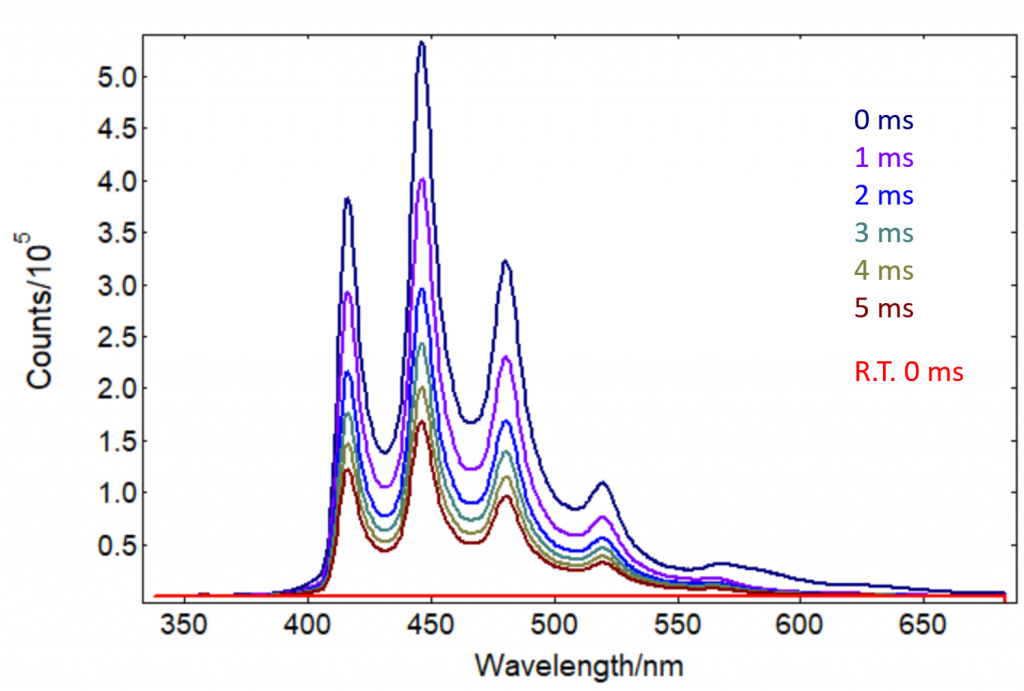 Characterising the triplet state dynamics of a molecule requires a variety of techniques such as transient absorption, photoluminescence, spectral and time-resolved measurements. The LP980 Transient Absorption Spectrometer offers all of these techniques, as well as accessories for temperature control including software-controlled cryostats. Temperature-dependent transient absorption of benzophenone reveals a dramatic change in its triplet concentration and lifetime as the temperature decreases. Such information is paramount to the design and optimisation of applications involving triplet state reactions.

Our LP980 Transient Spectrometer was used in this Application Note. For further information and to find out how it can be used in your own research view the LP980 online.

Stay up to Date