Hypochlorite (ClO–) is commonly used for disinfecting tap water, but its concentration needs to be monitored to make sure it is effective but not toxic. Researchers in Fujian, China, led by Rong Cao and Zu-Jin Lin, have developed a new method for sensing ClO– employing fluorescence spectroscopy and novel metal organic frameworks. The authors used an Edinburgh Instruments FS5 Spectrofluorometer to characterise and optimise the sensor’s response towards ClO– . They then employed this fluorescence sensor to detect ascorbic acid, an essential nutrient for the human body.

Metal organic frameworks (MOFs) are compounds containing metal ions and organic ligands arranged in a regular coordination network. They are useful in sensing applications since their porous structures enable the absorption of analytes of a particular size. Moreover, it is possible to employ a fluorescent MOF as a sensor if its photoluminescence properties change in the presence of the analyte. This idea has been previously exploited for ClO– detection, but always based on a single emission intensity. In this study, Zeng et al. propose a ratiometric fluorescence sensor to improve sensitivity and robustness. In a ratiometric fluorescence sensor, the intensities of two fluorescence signals with different responses to an analyte are measured. Using the ratio of two signals reduces the error in the measurement compared to a single emission sensor.

The authors synthesised a metal organic framework containing bipyridine-based BPyDC2− and H2N- BPyDC ligands as well as Eu(III) ions. The fluorescence emission spectrum from this MOF shows two components: BPyDC2− ligands contribute with a broad emission band in the blue whilst Eu(III) presents characteristic narrow bands in the red. The authors found that Eu(III) emission was practically independent of ClO– concentration, while the blue band was strongly dependent on it. Fast and accurate measurements performed in the FS5 Spectrofluorometer allowed the authors to establish a calibration curve based on the ratio between the two signals (Figure 1). 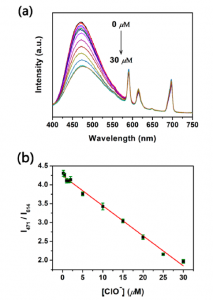 Figure 1. (a) Fluorescence emission spectra from the Eu/BPyDC MOF studied under different concentrations of hypochlorite, acquired in an FS5 Spectrofluorometer. (b) Ratiometric fluorescence calibration curve obtained from the data in (a).

Further experiments helped establish the sensing mechanism, excluding energy transfer, inner filter effect, and oxidation of -NH2 groups as possible processes. Fluorescence lifetimes recorded in an Edinburgh Instruments FLS980 confirmed that the reason for the reduction in fluorescence is dynamic quenching (Figure 2). The authors hypothesise that quenching occurs due to hydrogen bonding between ClO– and the -NH2 groups in the metal organic framework. Ascorbic acid reacts with ClO– and gradually returns the fluorescence sensor to its initial “on” state. This is sketched in Figure 3. 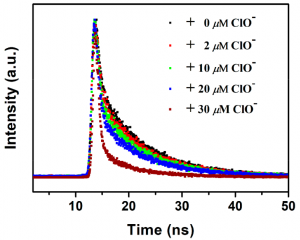 Figure 3. Proposed mechanism for the “on-off-on” fluorescence sensor. In the “on” state, both the pyridine-containing units and the Eu(III) ions emit fluorescence. Hypochlorite enters the MOF cavities and forms hydrogen bonds with the BPyDC units, quenching their fluorescence. Ascorbic acid removes ClO– returning the sensor to its “on” state.

If you have enjoyed this application note from Edinburgh Instruments about Metal Organic Frameworks as a Ratiometric Fluorescence Sensor for Hypochlorite and Ascorbic Acid and would like to be the first to know about our future research articles, please take a moment to join us on social media and sign up to our infrequent eNewsletter via the link below.

Alternatively, if you would like to find out more information about our FS5 Spectrofluorometer, which has been used in this research, please don’t hesitate to get in touch with a member of our team today.