The measurement of fluorescence lifetimes provides a wealth of information on the sample under study, from charge-carrier lifetimes in semiconductors to the local environment of biomolecules in living cells. In many of these studies, short fluorescence lifetimes on a picosecond timescale are required to be measured.  In this application note, the measurement of sub 20 picosecond lifetimes utilising the FLS1000 Photoluminescence Spectrometer equipped with a hybrid photodetector is demonstrated, and the impact that the configuration of the FLS1000 has on the minimum lifetime that can be measured is discussed. 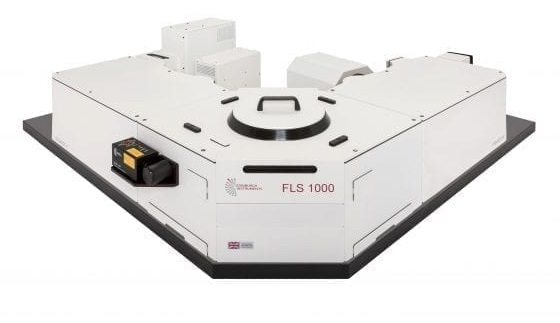 The hemicyanine dye trans-4-[4-(dimethylamino)-styryl]-1-methyl-pyridiniumiodide (4-DASPI) was chosen to demonstrate the measurement of short lifetimes using the FLS1000. DASPI dyes are commonly used as short lifetime fluorescence probes and as a laser gain media. 4‑DASPI was purchased from Sigma Aldrich and dissolved in either anhydrous ethanol or distilled water.

Fluorescent lifetimes in the FLS1000 are measured using the time-correlated single photon counting (TCPSC) technique. In an ideal TCSPC system, the temporal width of the excitation pulse and the temporal response of the detection system would both be infinitely sharp (delta functions). However, this is never the case since lasers have finite pulse widths and detectors have transit response times and this deviation from the ideal is characterised by the instrument response function (IRF) of the TCSPC system. The IRF can be thought of as temporal response that the TCSPC system records for an infinitely short fluorescence lifetime.

The IRF has four main components:

FWHMelectronics is the broadening of the IRF due to the electronic jitter of the TCSPC timing electronics. This contribution to the IRF is small as every FLS1000 uses the advanced Edinburgh Instruments TCC2 counting electronics module which has a jitter as low as 20 ps.

FWHMlaser is the pulse width of the laser excitation source. Picosecond pulsed diode lasers are the most common light source for TCSPC measurements. Edinburgh Instruments EPL series of diode lasers have pulse widths down to 55 ps and are ideal for most scenarios. The FLS1000 also has laser ports to allow the user to couple third party lasers into the spectrometer. To demonstrate this flexibility and narrow the IRF, a femtosecond fibre laser, the Chromacity 520,3 which has a pulse width of 150 fs was used for the measurement of 4-DASPI. To trigger the TCSPC electronics, a fraction of the laser pulse was picked off and directed into the OT900 Optical Trigger Module.

FWHMdetector is broadening due to the transit time spread (TTS) of the detector and has the greatest influence on the overall width of the IRF. The TTS is due to the photon-to-photon variation in the delay between the absorption of a photon at the photocathode of the detector and the electrical output pulse. The standard detector of the FLS1000 is the PMT-900 which is a conventional side window photomultiplier tube (PMT) which has a TTS of ~600 ps and limits the minimum lifetime to > ~60 ps. To measure shorter lifetimes the FLS1000 can be equipped with high-speed PMTs (HS-PMT) which have TTS of ~180 ps. For many years the only option for measuring shorter fluorescence lifetimes was using a microchannel plate PMT (MCP-PMT) which have excellent TTS of <25 ps but are expensive and fragile. Recently a new type of fast detector has been developed, the hybrid photodetector (HPD), which combines components of a traditional PMT with an avalanche photodiode to make a robust detector with a TTS as low as an MCP‑PMT. For the measurement of 4-DASPI, the FLS1000 was equipped with an HPD detector. The combination of HPD detector, low groove density grating and femtosecond laser in the FLS1000 resulted in a FWHMIRF of only 34 ps.

The fluorescence decay of 4-DASPI in ethanol is shown in Figure 3a. The decay was measured at the emission maximum (600 nm) and the IRF was measured at the laser wavelength (520 nm) using a scattering dispersion of colloidal silica (LUDOX). The decay was fit with a single exponential using revonvolution fitting in the Edinburgh Instruments FAST advanced lifetime analysis software. A single exponential decay models the fluorescence well and the lifetime of 57 ps is in good agreement to previous reports.1

Figure 3. Fluorescence decays of 4-DASPI in (a) ethanol and (b) water measured using TCSPC.

It is known that when 4-DASPI is dissolved in water its fluorescence lifetime decreases fivefold,1 and a solution of 4‑DASPI in water was therefore also measured to provide a more challenging sample to test the short lifetime capabilities of the FLS1000. The fluorescence decay and fit of 4-DASPI in water are shown in Figure 3b revealing a lifetime of 11 ps which is in perfect agreement to the 11 ps lifetime previously reported in the literature.2

The capability of the FLS1000 Photoluminescence Spectrometer to measure short picosecond lifetimes was demonstrated by measuring the fluorescence lifetime of 4‑DASPI in ethanol (57 ps) and water (11 ps). Through customisation of the light sources, gratings and detectors of the modular FLS1000, the minimum measurable lifetime can be adjusted to meet the demands of a wide variety of different research areas.

Download a PDF of this application note here: Measuring Picosecond Fluorescence Lifetimes Using the FLS1000 Equipped with a Hybrid Photodetector

Our FLS1000 Photoluminescence Spectrometer was used to undertake this research.  If you have enjoyed reading this Application Note and wish to learn more about our applications and products then why not contact a member of our team at sales@edinst.com, sign up to our newsletter or follow us on social media via your preferred channel below.