VIEW ALL PRODUCTS
Blog What is Upconversion?

Photon upconversion is the sequential absorption of two or more long wavelength photons leading to the emission of a photon with a shorter wavelength. The fact that the emission is at a shorter wavelength than the excitation light makes upconversion distinct from other forms of photoluminescence such as fluorescence and phosphorescence where the emission always occurs at a longer wavelength (see Stokes Shift), and upconversion luminescence is therefore also known as anti-Stokes fluorescence. Upconversion occurs through the sequential absorption of photons and is usually considered distinct from two-photon absorption processes where the photons are absorbed simultaneously.
Upconversion has many important medical and technological applications such as improved biological imaging and sensing using upconversion nanoparticles,1 enhancing the light-harvesting of solar cells,2 and deeper tissue penetration in photodynamic therapy for cancer treatment,3 amongst others. 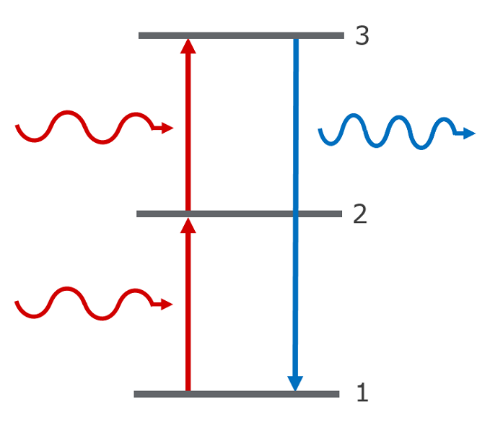 A simple mechanism for excited state absorption upconversion (ESA) using a hypothetical three level system is shown in Figure 1. The emission centre is initially in its ground state (1) and absorption of the first photon promotes it to the intermediate excited state (2). If the centre then absorbs a second photon before it relaxes back to the ground state it is promoted to the higher-lying excited state (3). The centre then radiatively relaxes back to state 1 resulting in the emission of a photon with an energy double that of the two absorbed photons. For ESA  to occur, state 2 must be sufficiently long-lived and the photon flux high enough so that a second photon is absorbed prior to relaxation of state 2 back to the ground state.

In energy transfer upconversion (ETU) a sensitiser and emitter (typically two different types of rare-earth ions) are used to generate the upconversion. The simplest ETU mechanism is shown on the left. A sensitiser first absorbs a photon and is promoted to its excited state. This is followed by energy transfer (ET) to the emitter, promoting it to the intermediate excited state (2) and relaxation of the sensitiser back to the ground state. A second sensitiser then absorbs a photon and ET to the emitter promotes it to the higher-lying excited state (3) from where it radiatively relaxes back to the ground state releasing a higher energy photon. ET can also occur in conjunction with other processes such as ESA as shown on the right. For ETU to be efficient the sensitiser and emitter must be spatially close so that ET can occur, and the energy of the intermediate excited state of the emitter must be lower than the excited state of the sensitiser to provide an energetic driving force. 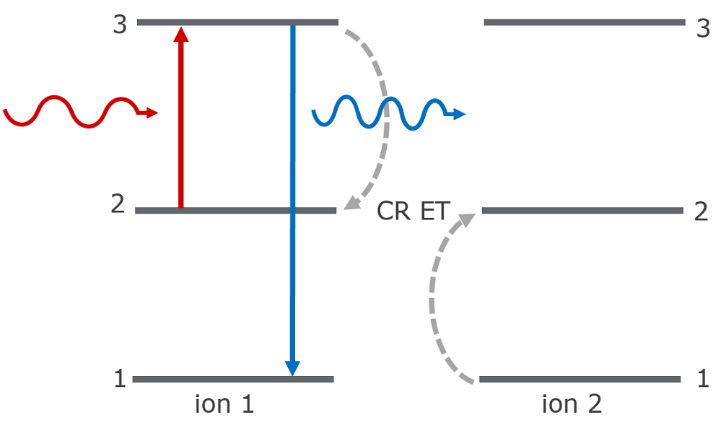 Photon avalanche upconversion (PA) is a less common mechanism and occurs inside laser cavities. The PA mechanism is based on cross relaxation energy transfer (CR ET) between closely spaced ions in a material.4 Initially all ions are in state 1 and at some point one of the ions will be promoted to state 2 and then promoted to state 3 via ESA. Through the CR ET process, this ion can then relax back to state 2 while promoting a neighbouring ion to state 2. These two ions can then undergo ESA followed by CR ET with two more neighbouring ions leading to four ions in state 2 and so on until all ions in the material are in state 2. Upconversion then proceeds directly through excited state absorption from state 2 to 3 without any ground state absorption occurring first.

In molecular systems, the excited states are strongly localised which leads to distinct singlet and triplet states and gives rise to a variation of ETU for molecular systems known as triplet-triplet annihilation (TTA). TTA is a bimolecular mechanism with a sensitiser molecule used to absorb the photons and an emitter molecule to undergo TTA and emit the upconverted photons. A sensitiser first absorbs a photon promoting it to its excited singlet state (S1) which is followed by intersystem crossing (ISC) to the triplet state (T1). The energy is then transferred to the emitter through triplet mediated ET, promoting the emitter to the T1. This process is repeated for a second emitter-sensitiser pair. Finally, the two emitters undergo TTA, promoting one emitter to the S1 and the other to the ground state. The emitter in the S1 then radiatively relaxes back to the ground state emitting a high energy photon. 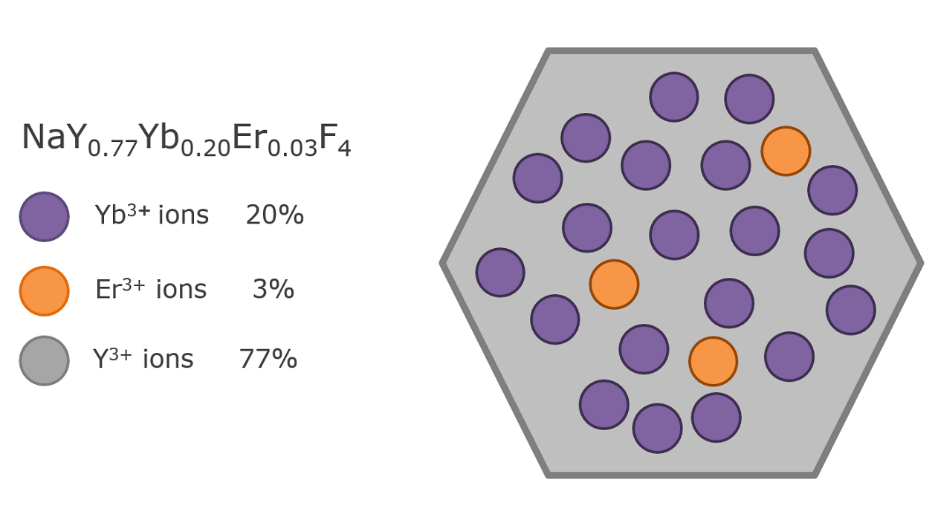 Upconversion in NaY0.77Yb0.20Er0.03F4  proceeds through the ET mechanism with Yb3+ ions acting as the sensitiser and Er3+ is the emitter. The 2F7/2 → 2F5/2 transition in Yb3+ can be excited using a 980 nm laser and the first ET to Er3+ promotes it to the 4I11/2 state. From here the Er3+ either undergoes a non-radiative relaxation down to the 4I13/2 state and the second ET promotes it to the 4F9/2 state, or the second ET promotes it from 4I11/2 to the 4F7/2 where it non-radiatively relaxes to the 2H11/2 and 4S3/2 states. From these three states the Er3+ radiatively relaxes back down to the 4I15/2 state releasing high energy photons.

The upconversion luminescence spectrum of NaY0.77Yb0.20Er0.03F4 was measured using the FLS1000 Photoluminescence Spectrometer and is shown in Figure 7. The FLS1000 can be equipped with a high power 980 nm CW laser for excitation and a double emission monochromator for superior stray light rejection which makes it ideal for measuring the typically weak upconversion luminescence from these highly scattering samples. The spectrum contains three distinct bands centred at 525 nm, 546 nm and 658 nm which correspond to the three transitions shown in Figure 6. The 4S3/2 and 2H11/2 levels are thermally coupled and the intensity ratio of the 4S3/2 → 4I15/2 and 2H11/2 → 4I15/2 transitions, therefore, depends on temperature enabling it to be used for luminescence thermometry. 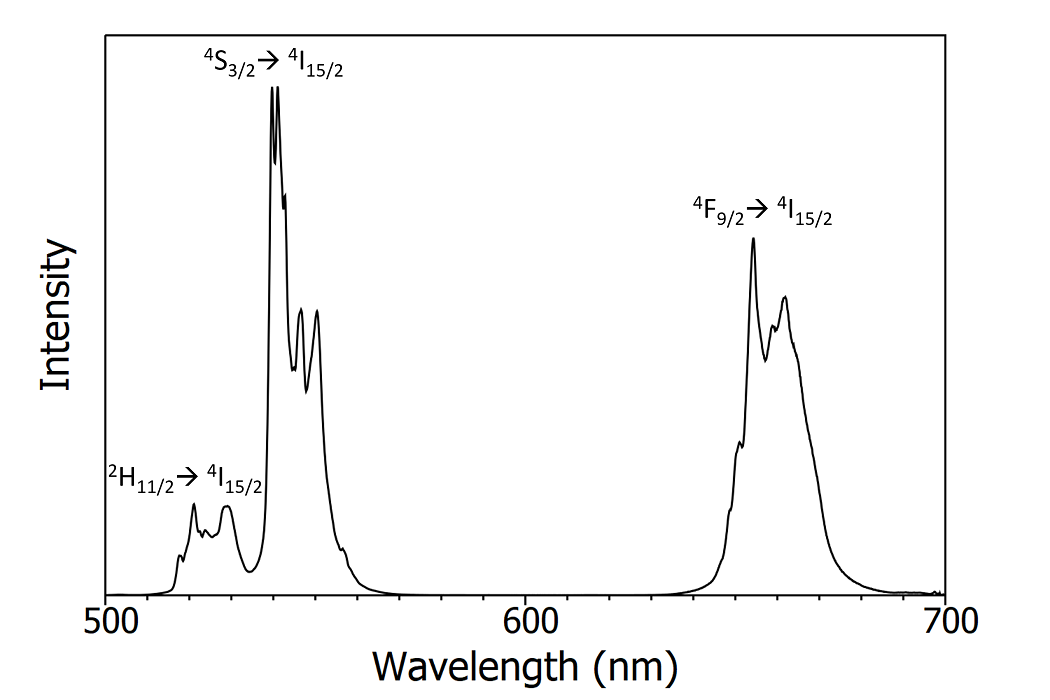 To keep up to date with our latest research and products, please take a moment to join us on social media and sign up to our eNewsletter.