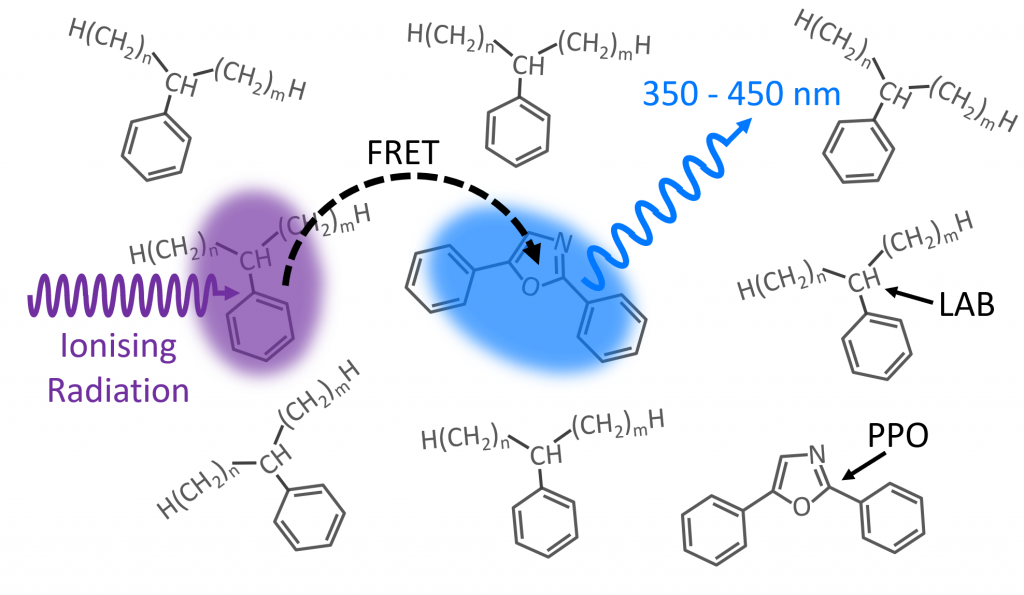 A schematic of the scintillation process in the LAB/PPO system is shown in Figure 1. Ionising radiation, such as γ-rays, travel through the LAB solvent and excite a molecule of LAB to a high energy state. The excess energy in the LAB is non-radiatively transferred (FRET) to a nearby PPO molecule promoting it to an excited state. Radiative de-excitation of the PPO back to its ground state results in violet/blue luminescence which can be detected.

PPO (Sigma Aldrich) was dissolved in LAB (Cepsa Canada) at a series of concentrations between 1 g/L and 20 g/L, and pipetted into quartz cuvettes. X-ray excited luminescence spectra and decays of the LAB/PPO solutions were measured using an Edinburgh Instruments FLS1000 Photoluminescence Spectrometer coupled to the XS1 X-ray Sample Chamber (Figure 2).

The XS1 X-ray Sample Chamber is an X-ray shielded enclosure that can be equipped with multiple X-ray sources for the investigation of new scintillator materials. To acquire the X-ray excited luminescence spectra of LAB/PPO the XS1 was equipped with a compact 60 kV continuous-wave X-ray source. For the luminescence decay measurements, the LAB/PPO was excited by a 40 kV pulsed X-ray source which was optically pumped using an Edinburgh Instruments HPL-450 pulsed diode laser. The X-ray excited luminescence from the scintillator is collected by a liquid light guide which delivers it to the FLS1000 where it is wavelength selected and detected. The FLS1000 was equipped with a PMT-900 detector that is sensitive from 200-870 nm and time-correlated single-photon counting (TCSPC) electronics. 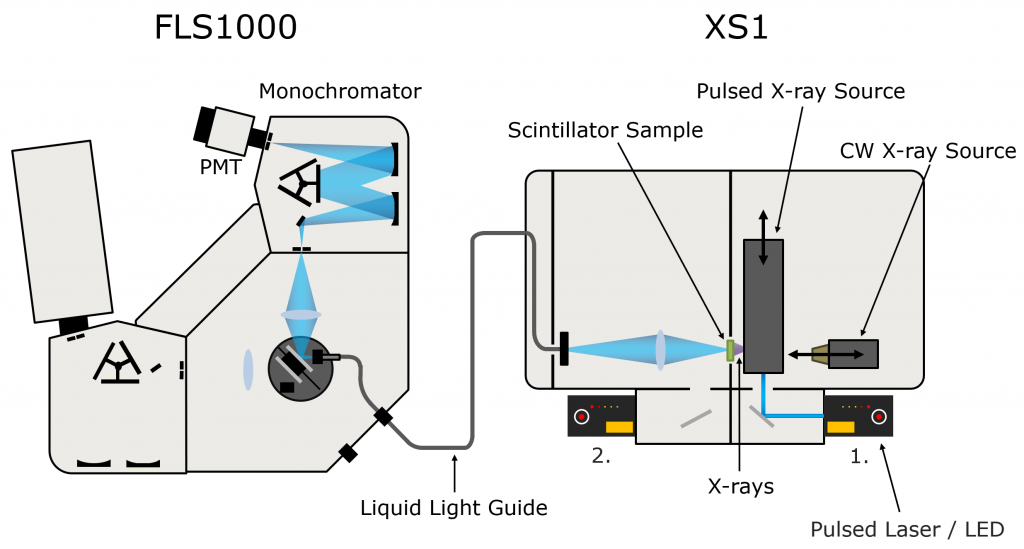 The X-ray excited luminescence spectrum of LAB/PPO was first acquired using the CW X-ray source and is shown in Figure 3. The luminescence has a peak at 365 nm and originates purely from the PPO component with no luminescence directly from LAB. 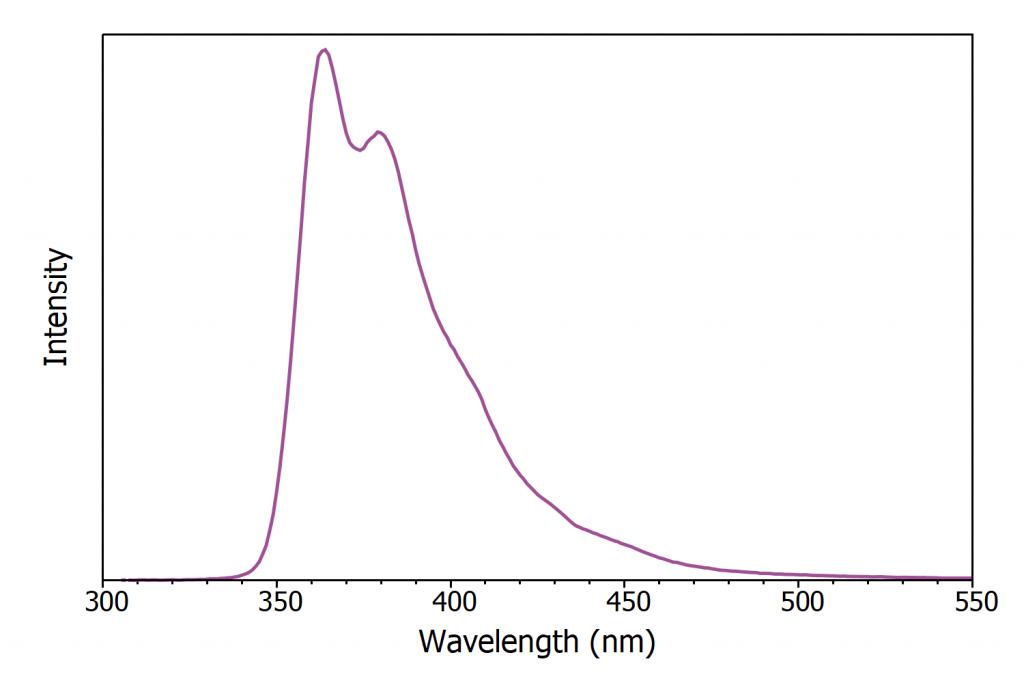 Next, the effect of PPO concentration on the luminescence decay profile of LAB/PPO was investigated. Eight LAB/PPO solutions with varying concentrations of PPO were excited using the 40 kV pulsed X-ray source and their decay measured using TCSPC (Figure 4). The shape of the decay profiles is complex, comprising of an initial prompt component followed by a long tail. The prompt component can be assigned to radiative de-excitation of PPO from its singlet excited state to the singlet ground state which is an allowed transition and therefore occurs rapidly. In contrast, molecules that have been excited into their triplet states cannot de-excite directly to the ground state and instead proceed through alternative de-excitation channels, such as triplet-triplet annihilation, which gives rise to the long tail in the luminescence decays. 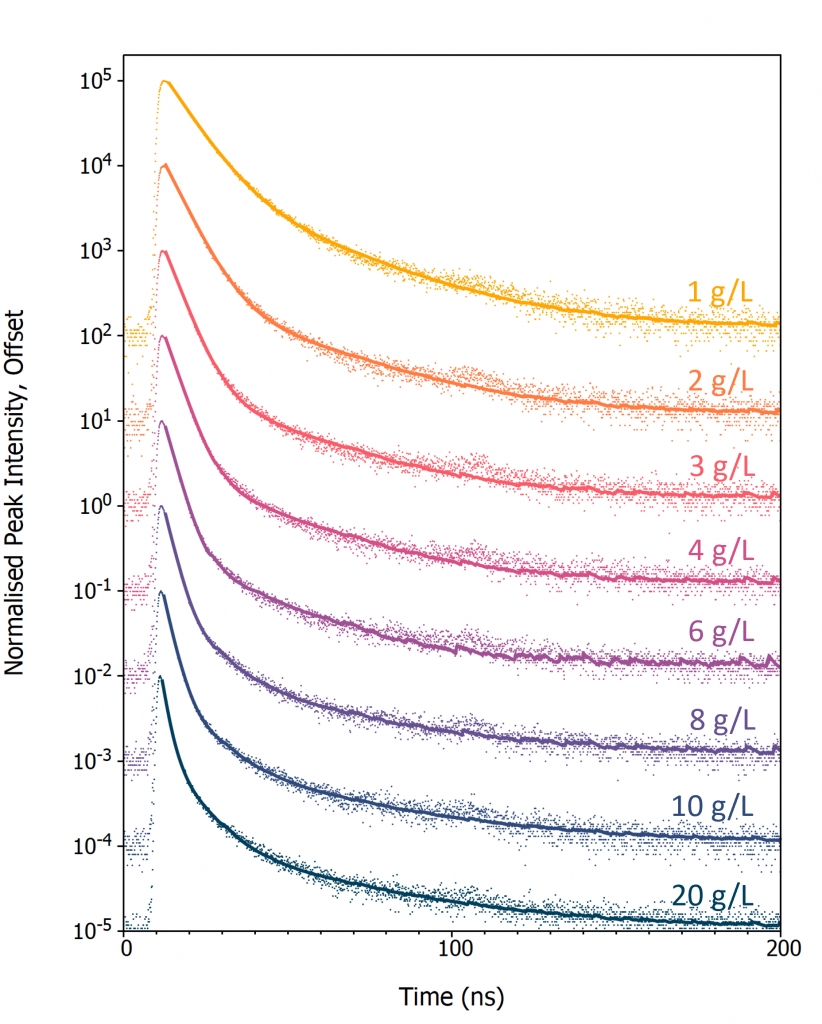 To extract the decay components the luminescence decays were fit with either a two (1 – 6 g/L) or three (8 – 20 g/L) exponential decay model using reconvolution fitting with Edinburgh Instruments FAST lifetime analysis software (solid lines in Figure 4). The lifetime and intensity fraction of each decay component is given in Table 1. The fastest decay component (τ1) corresponds to the radiative singlet de-excitation of PPO and is the dominant contribution to the total luminescence for all PPO concentrations, with a luminescence fraction between 72 and 96 %.

Figure 5: Variation of τ1 in LAB/PPO with PPO concentration.

The X-ray excited luminescence decay properties of LAB/PPO at varying PPO concentrations were investigated using an Edinburgh Instruments FLS1000 with the XS1 X-ray Sample Chamber Accessory.  The lifetime of the primary decay component was found to decrease from 7.1 ns to 1.7 ns as the concentration of PPO was increased from 1 to 20 g/L. The XS1 X‑ray Sample Chamber Accessory extends the functionality of the FLS1000 PL spectrometer into the X-ray region, creating a powerful characterisation tool for the development of new scintillator materials.

We are grateful to Dr Sasmit Gokhale from Brookhaven National Laboratory for providing the LAB and PPO used in this application note.