Fluorescence, Delayed Fluorescence and Phosphorescence Spectra of a TADF Emitter Measured using the FLS1000 with a VPL laser and Gated PMT Detector

Materials exhibiting thermally activated delayed fluorescence (TADF) have attracted widespread research attention as a new generation of high-efficiency emitters for use in Organic Light Emitting Diodes (OLEDs). In a TADF OLED, triplet excitons are converted to singlet excitons through a thermally assisted reverse intersystem crossing which enables internal quantum efficiencies of 100% to be achieved. 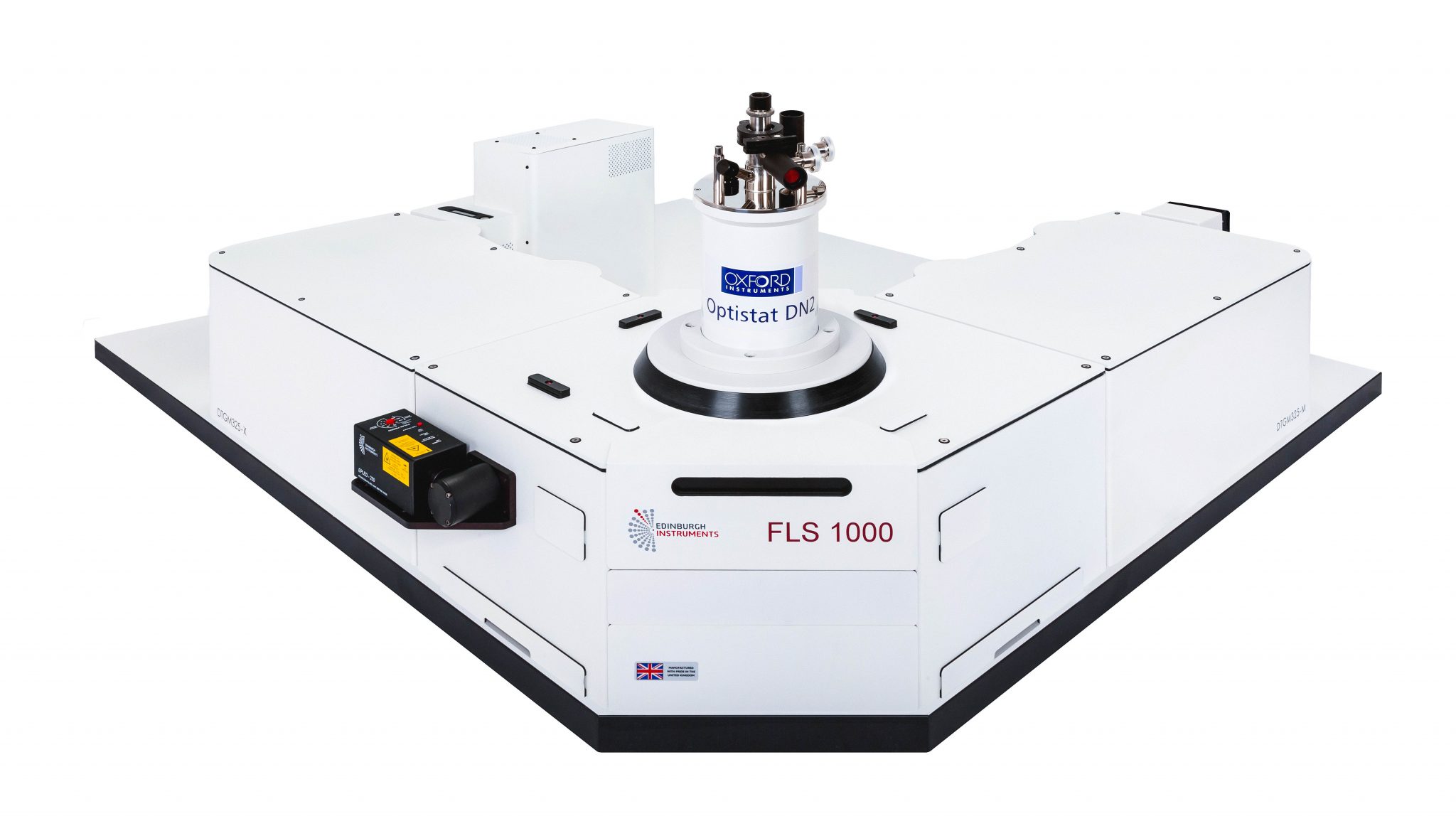 MCS is a complementary time-resolved technique to the more widely known time-correlated single photon counting (TCSPC) and is the method of choice for measuring delayed fluorescence. In MCS the detection window is split into time intervals and all photons that arrive within a specified time interval are counted, the photons in the next interval are then counted and so on until the entire time range has been covered. This multiple stop mode detection enables higher detection count rates to be used than in TCSPC which reduces the acquisition time of longer decays. 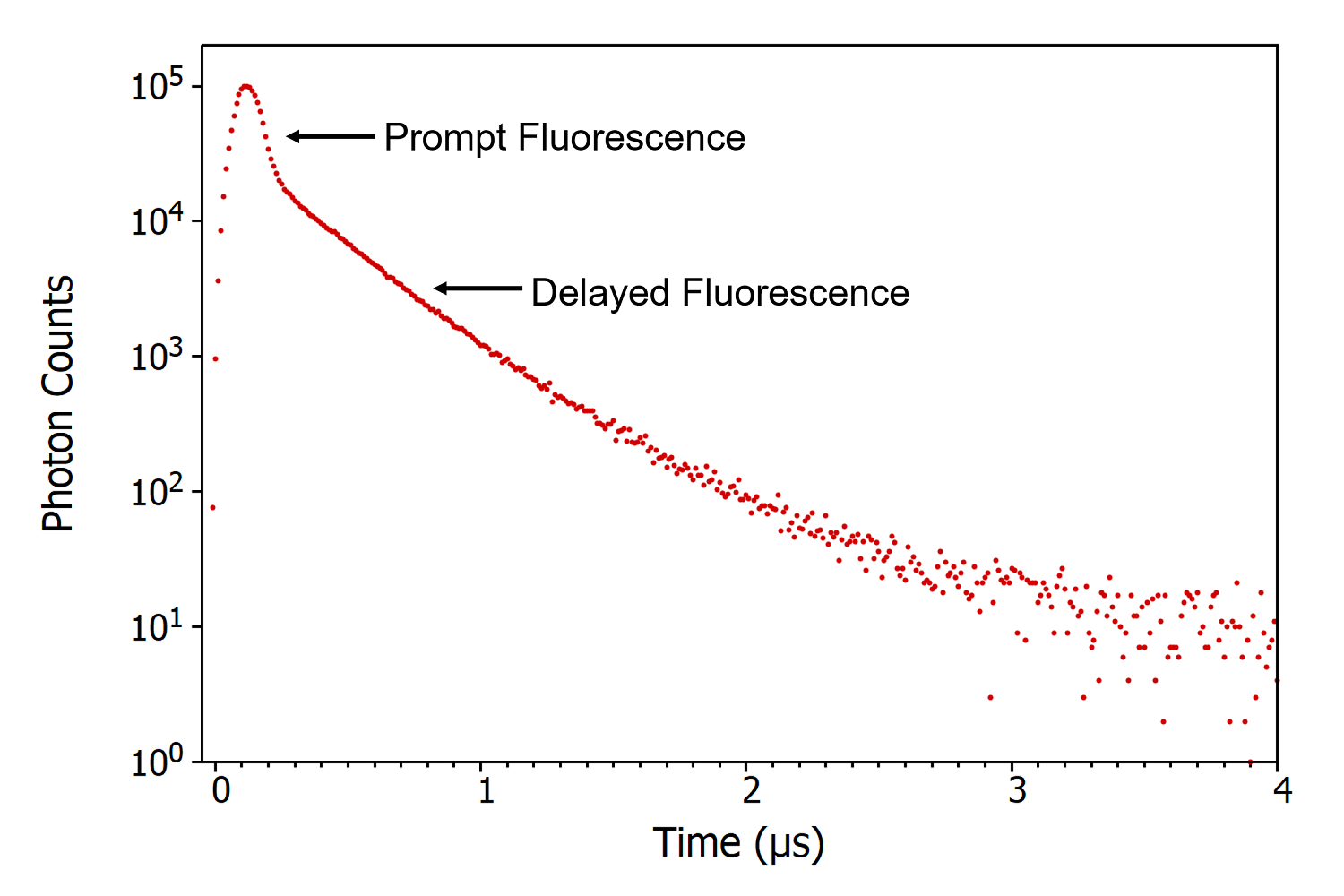 The best method to measure the spectra of the prompt and delayed fluorescence components is a time-resolved emission scan (TRES). In a TRES measurement, the fluorescence decay is measured as a function of emission wavelength to build up a three-dimensional time-resolved spectrum (Figure 3a). The VPL is ideal for TRES measurements of delayed fluorescence as its high intensity and repetition rate enable rapid acquisition; with the TRES profile shown in Figure 3 measured in under 15 minutes. To obtain the emission spectra of the prompt and delayed components the TRES profile is integrated using the Fluoracle software of the FLS1000 to give the spectra in a specified time-window. It can be seen that the spectra of the prompt and delayed components are identical which confirms that the delayed component is indeed fluorescence from the S1 state. 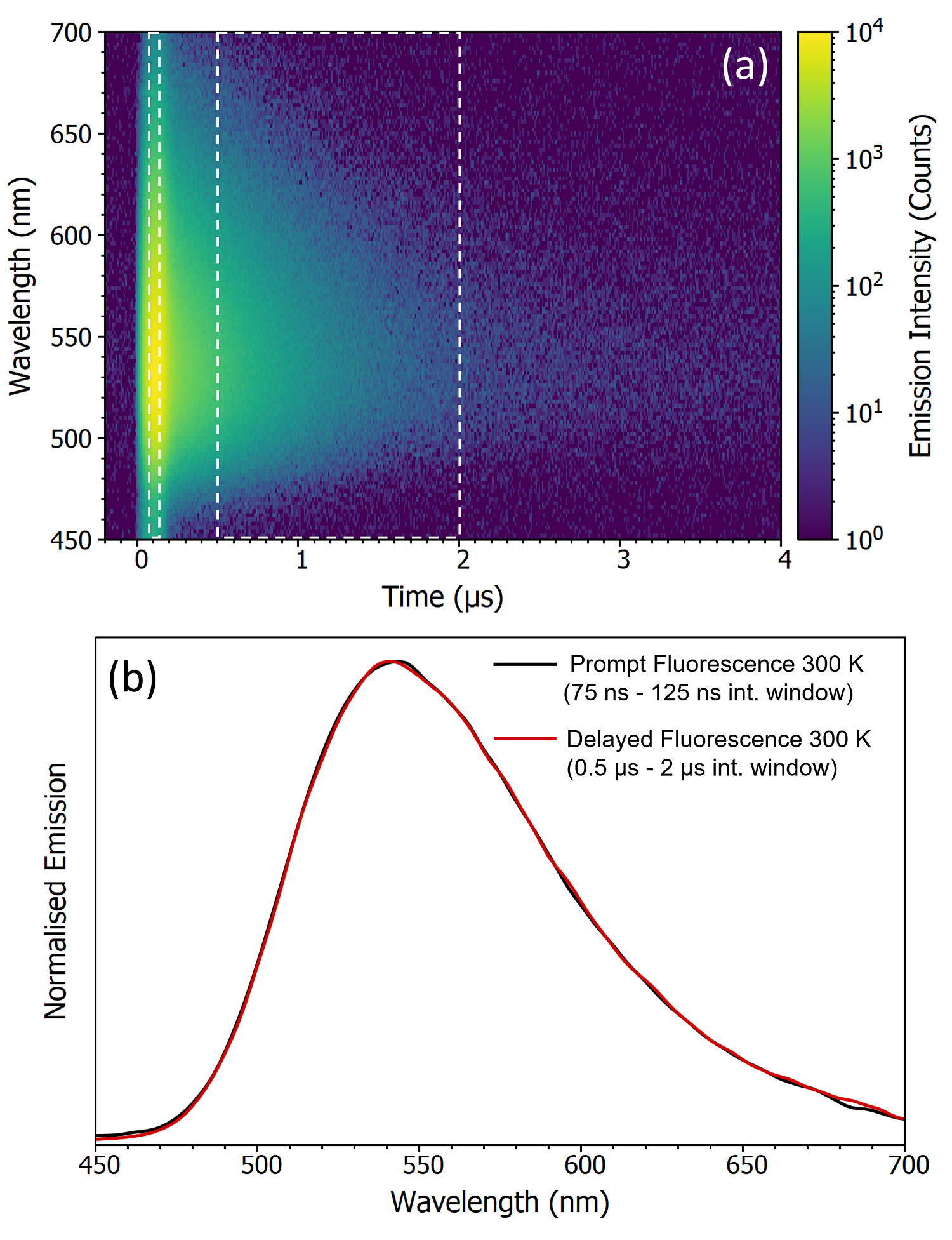 At room temperature, there is no phosphorescence from an efficient TADF emitter as the triplet state is depopulated through reverse intersystem crossing.  The sample must, therefore, be cooled to cryogenic temperatures in order to measure the phosphorescence spectrum. The FLS1000 can be equipped with a wide range of nitrogen, helium, and cryogen-free cryostats; enabling measurements down to 3 K. 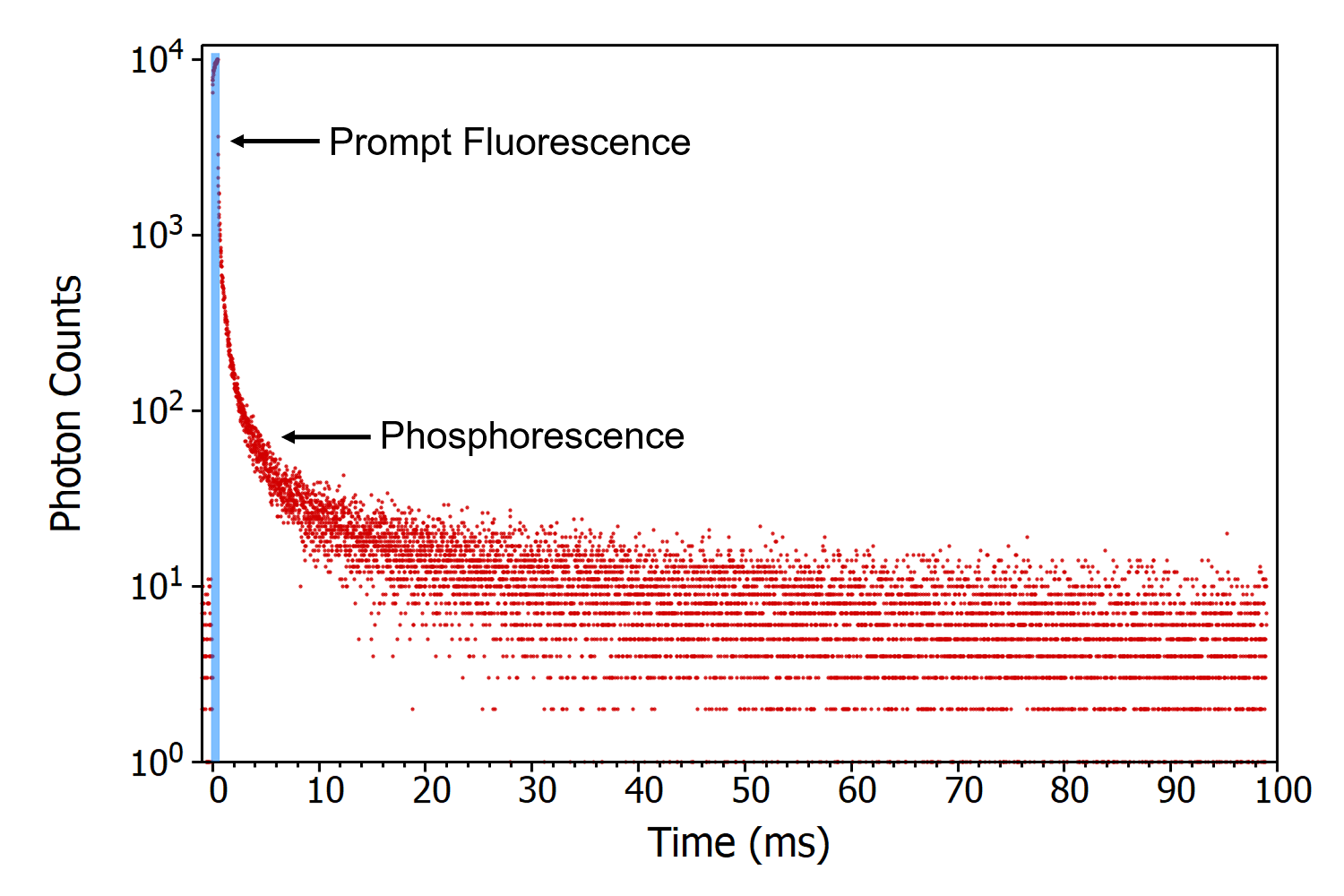 The solution to this problem is to time-gate the PMT detector (Figure 5). In detector gating, the high voltage to the PMT is only applied within a user-defined window known as the gate. The gate delay (the time between the start of the laser pulse and the start of the gate) and the length of the gate are selected in Fluoracle in order to only detect within the time region of interest. In the case of phosphorescence spectra, the gate delay is chosen such that the fluorescence has ended which simultaneously enables higher count rates to be used and isolates the phosphorescence from the fluorescence. The phosphorescence spectrum of CzDBA is shown in Figure 6 and was measured using a 5 ms gate delay and a 50 ms gate width and was acquired in less than 15 minutes. For comparison, the 80 K fluorescence spectrum was also measured by setting the gate to occur during the laser pulse. 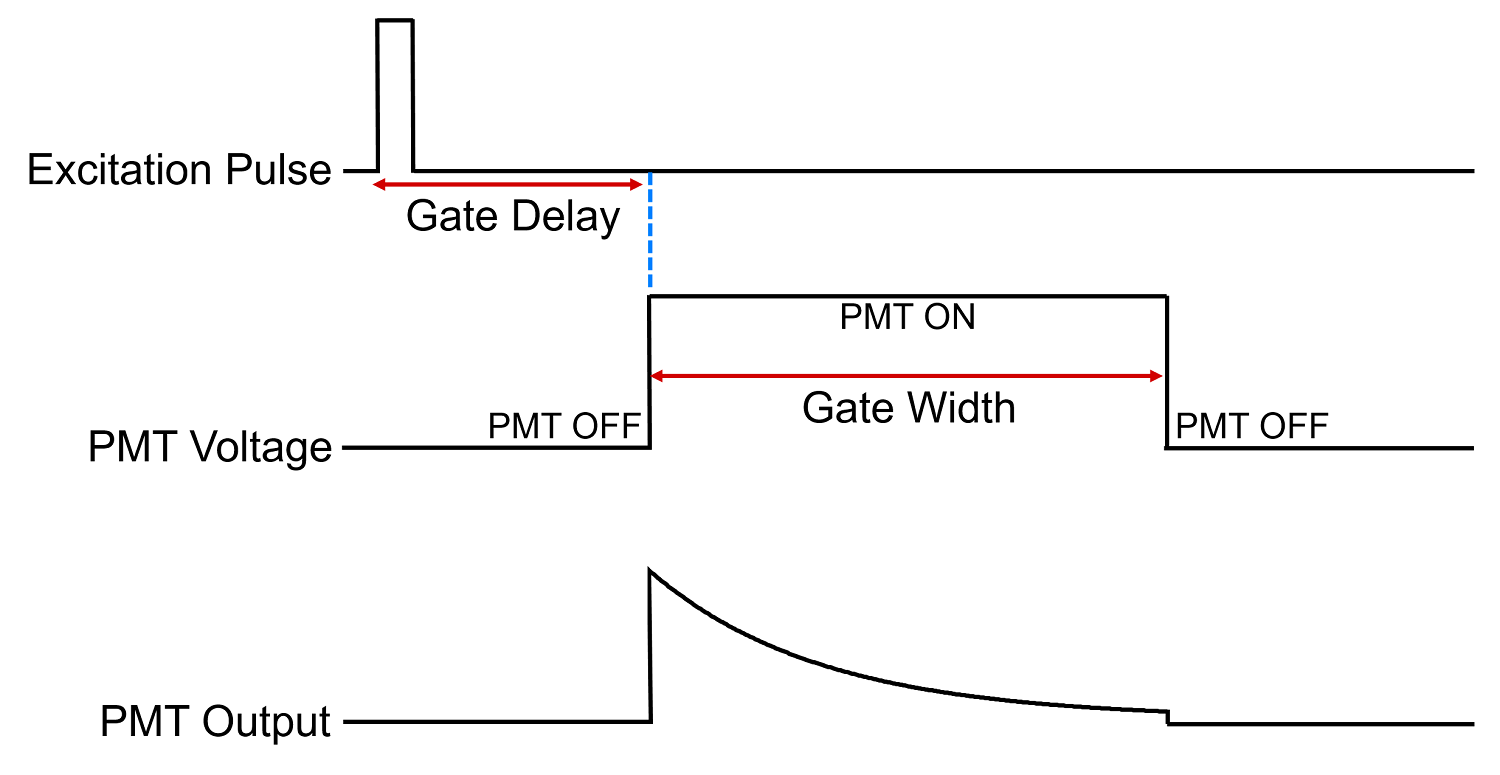 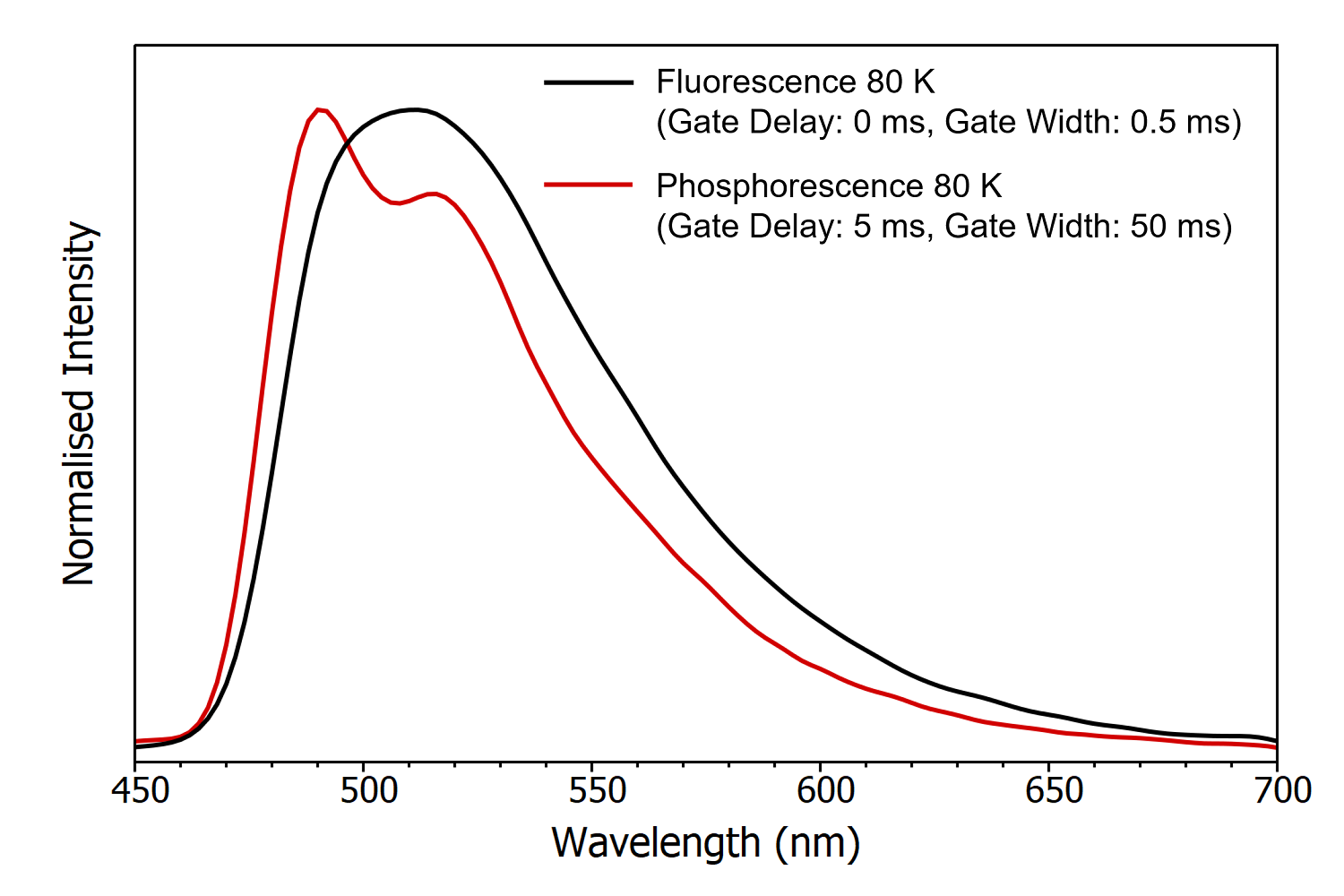 If you have enjoyed this application note on the Fluorescence, Delayed Fluorescence and Phosphorescence Spectra of a TADF Emitter, download a PDF copy here.

If you are interested in any of our fluorescence spectroscopy instrumentation or have any queries and would like to get in touch with a member of our team, please do not hesitate to contact us.