Two-photon microscopy is an imaging technique where two infrared photons are simultaneously absorbed to generate shorter wavelength fluorescence. Two-photon absorption is a non-linear process with the absorption probability scaling quadratically with excitation intensity. This results in the fluorescence being restricted to a much smaller focal volume than in one-photon fluorescence microscopy as the focal point is the only point in space with enough photon density for two-photon absorption to occur. This localised excitation combined with the lower absorption and scattering of the longer wavelength infrared excitation light makes two-photon microscopy ideal for imaging deep into thick biological samples. 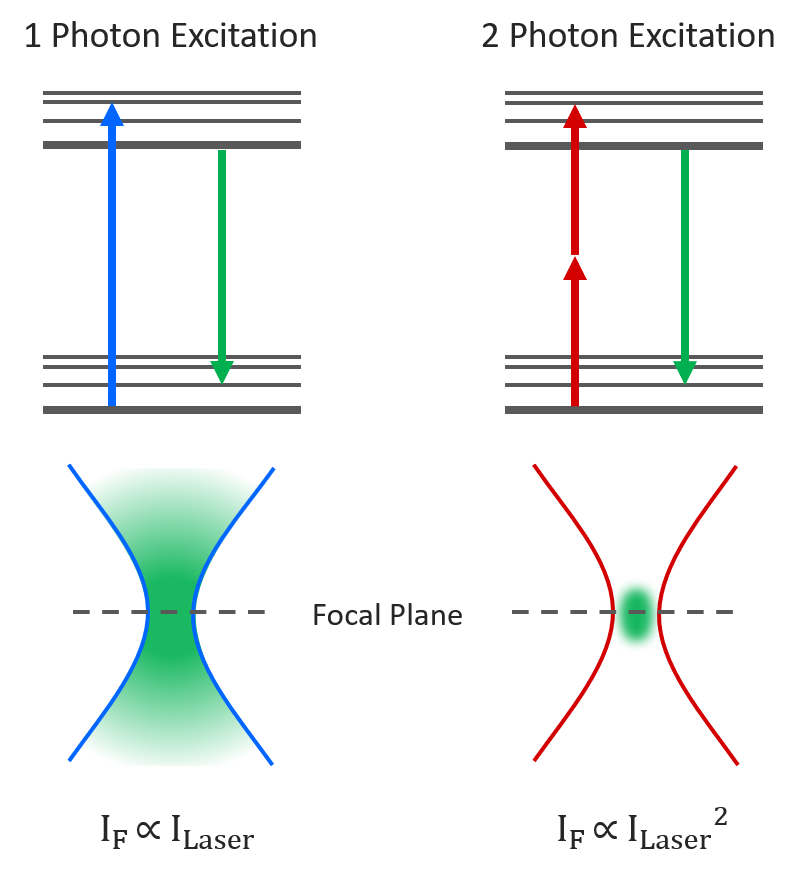 Two-photon absorption requires very high excitation intensities which can only be achieved with mode-locked femtosecond pulsed lasers. Traditionally this has been titanium sapphire lasers, but femtosecond fiber lasers are becoming an increasingly attractive and economical alternative. The Edinburgh Instruments RMS1000 Confocal Raman Microscope has external laser coupling ports that enable the optical coupling of mode-locked femtosecond lasers into the microscope. An experimental setup for two-photon spectral and lifetime microscopy with the RMS1000 is shown below, where the RMS1000 has been configured with both a CCD camera and a photon counting Hybrid Photodetector and time-correlated single photon counting (TCSPC) electronics for spectral and lifetime two-photon microscopy. 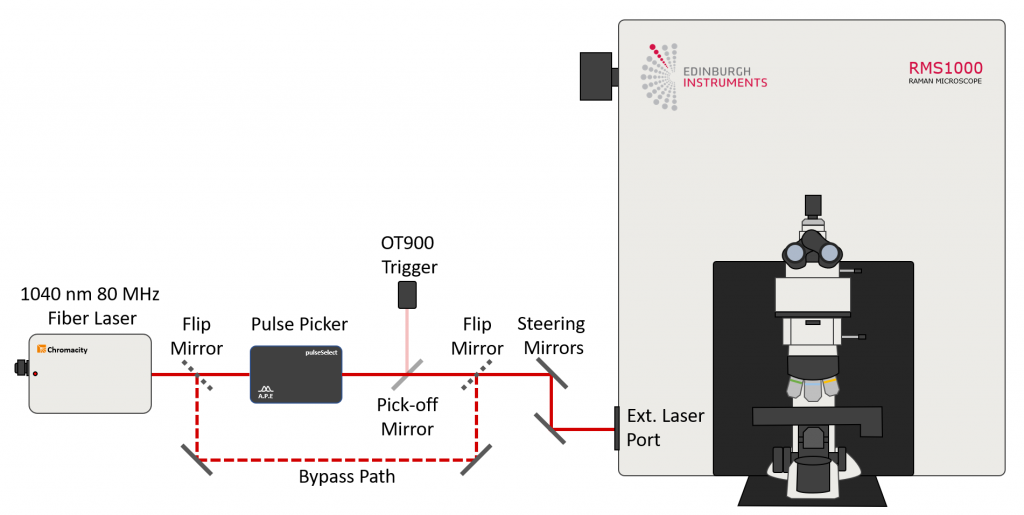 Figure 2: Example optical setup for two-photon microscopy. The RMS1000 is equipped with a BI-CCD camera for spectral fluorescence acquisition and a Hybrid Photodetector and TCSPC lifetime electronics for fluorescence lifetime acquisition. The laser excitation source is a Chromacity 1040 HP femtosecond fiber laser operating at 80 MHz (Chromacity Ltd., UK). For lifetime imaging the output of the laser is pulse picked to the desired pulse frequency using the Pulse Picker pulseSelect (APE GmbH, Germany). A small fraction of the output is picked off into an Edinburgh Instruments OT900 optical trigger to trigger the TCSPC electronics. For spectral measurements the pulse picker is bypassed and the 80 MHz laser output is coupled directly into the RMS1000.

Examples of Two-Photon Imaging with the RMS1000

Figure 3: Two photon intensity (a) and lifetime (b) imaging of a mouse kidney section. The glomeruli and convoluted tubules of the kidney tissue were labelled with green fluorescent Alexa Fluor® 488 while the filamentous actin present in glomeruli and the brush border was stained with red-orange fluorescent Alexa Fluor® 568. In (a) the Alexa Fluor® 488 and Alexa Fluor® 568 were excited by the 80 MHz 1040 nm femtosecond laser output and the green and red fluorescence simultaneously captured on the RMS1000 CCD camera. In (b) the 1040 nm laser was pulse picked to 20 MHz and the fluorescence decay measured on the RMS1000 Hybrid Photodetector using TCSPC.

Figure 4: Two photon intensity (a) and lifetime (b) imaging of a mouse intestine section stained with red-orange fluorescent Alexa Fluor® 568. In (a) the Alexa Fluor® 568 was excited by the 80 MHz 1040 nm femtosecond laser output and the two-photon excited fluorescence (2PEF) captured on the RMS1000 CCD camera. Two photon imaging setups can also be used for complementary technique of second harmonic generation (SHG) imaging. SHG at 520 nm from collagen was simultaneously recorded on the RMS1000 CCD camera revealing collagen build up in the intestine wall. In (b) the 1040 nm laser was pulse picked to 20 MHz and the fluorescence decay measured on the RMS1000 Hybrid Photodetector using TCSPC.

Figure 5: Two photon intensity (a) and lifetime (b) imaging of a convallaria rhizome stained with acridine orange. The acridine orange was excited at 10 MHz using the pulse picked 1040 nm femtosecond laser output and the fluorescence decay measured on the RMS1000’s Hybrid Photodetector using TCSPC. The integrated fluorescence intensity of the decay is shown in (a) and the fitted lifetime in (b), highlighting the increased local environment information that can be obtained from fluorescence lifetime imaging.