Second harmonic generation (SHG) microscopy is an imaging technique where the sample’s ability to generate second harmonic light creates contrast in the image.  SHG is a non-linear optical process where two photons with the same wavelength interact in a material to generate a photon with exactly half the wavelength of the incident photons. The generation of a SHG signal depends on the symmetry of the molecular structures in present a sample, with SHG only occurring when there is a non‑centrosymmetry in the excitation focal volume. This sensitivity to symmetry makes SHG imaging a powerful technique in materials science where it can be used to image the grain boundaries and layer stacking in 2D semiconductors through the changes in crystal symmetry. It can also be applied to biological tissue imaging as certain biological tissues, such as fibrillar collagen, are non‑centrosymmetric and SHG imaging is therefore highly selective towards them. 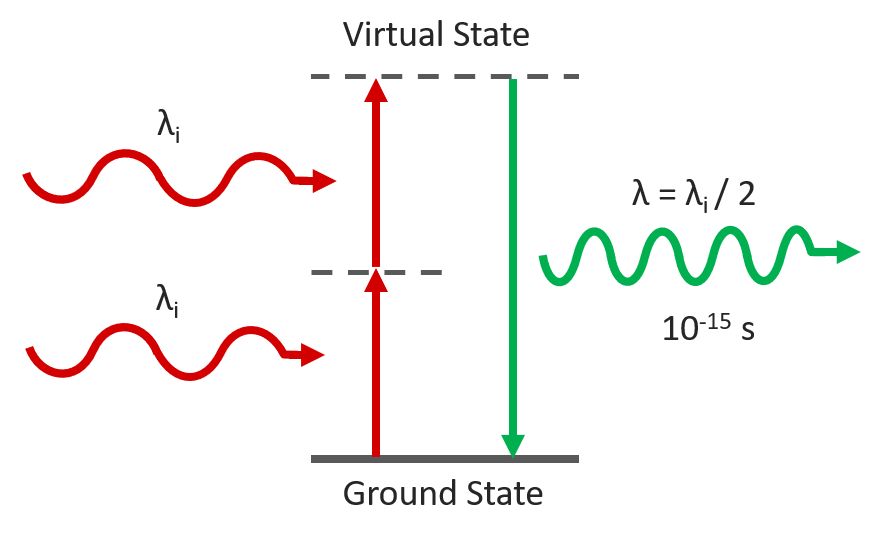 SHG requires a very high excitation intensity which is achieved using mode-locked femtosecond pulsed lasers. Traditionally this has been titanium sapphire lasers, but femtosecond fiber lasers are becoming an increasingly attractive and economical alternative. The Edinburgh Instruments RMS1000 Confocal Raman Microscope has external laser coupling ports that enable the optical coupling of mode-locked femtosecond lasers into the microscope. An example experimental setup for SHG microscopy with the RMS1000 is shown below. The sample is excited by the femtosecond laser and the SHG signal acquired on the RMS1000 CCD camera. 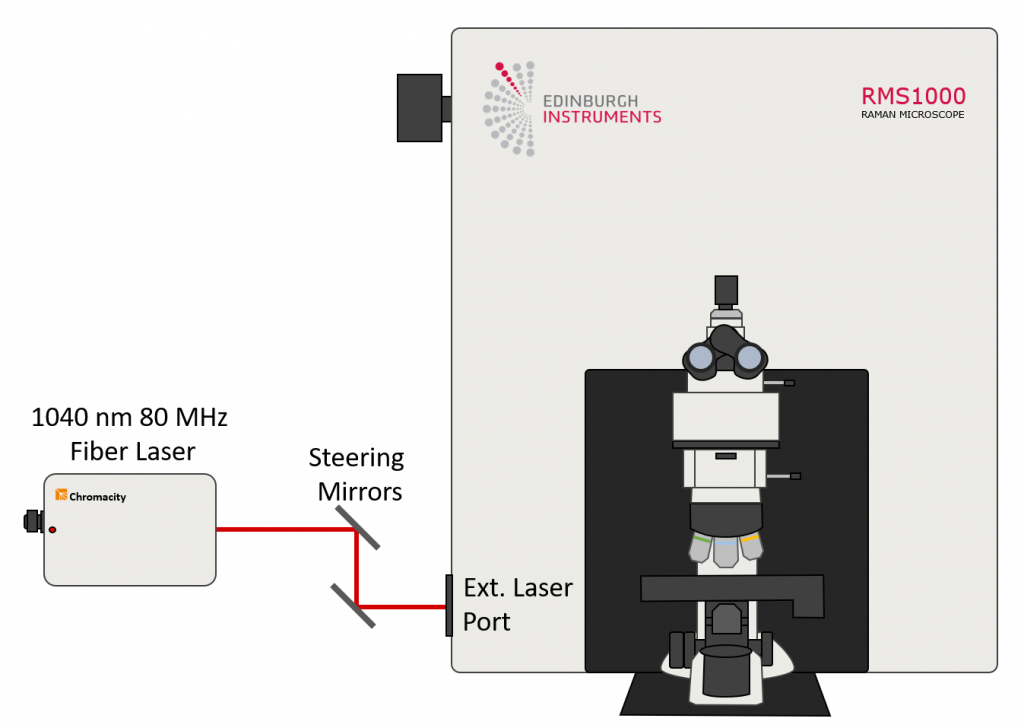 Figure 2. Example optical setup for SHG microscopy with the Edinburgh Instruments RMS1000. The laser excitation source is a Chromacity 1040 HP femtosecond fiber laser with an output wavelength of 1040 nm and a repetition rate of 80 MHz (Chromacity Ltd., UK).

Examples of SHG Imaging with the RMS1000 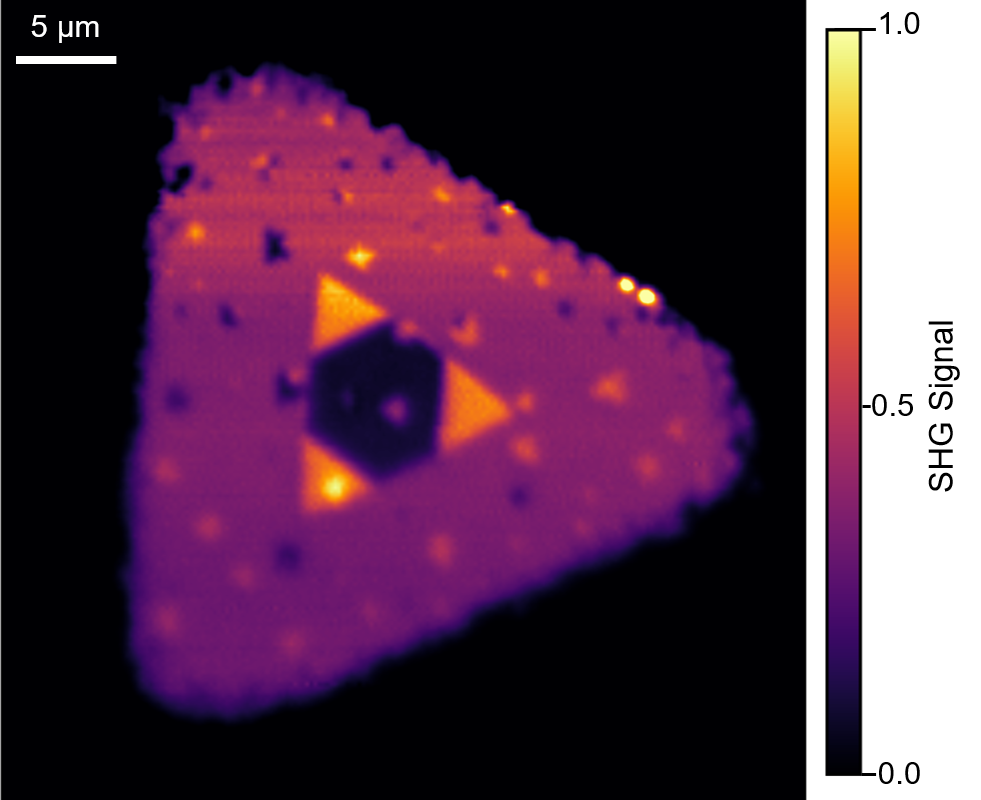 Figure 3. Second harmonic generation imaging of a WSe2 flake grown using CVD. The SHG image reveals the presence of multiple layers in the centre of the flake. The main triangle is monolayer WSe2 which has broken inversion symmetry (non-centrosymmetric) and therefore a SHG response. The three smaller bright triangles are bilayer WSe2 where the second layer has the same crystal orientation as the monolayer and broken inversion symmetry is maintained and the SHG response of the layers is additive. The dark region in the centre is likely trilayer WSe2 where the crystal growth is 180 degrees opposite to the monolayer and bilayer resulting in inversion symmetry and a significant decrease of the SHG signal. 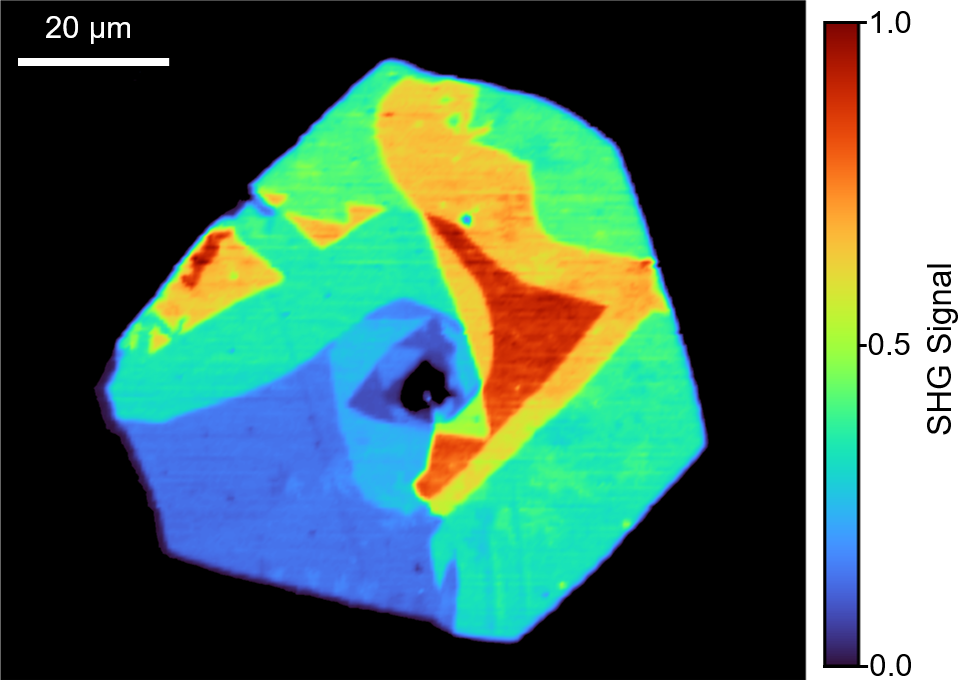 Figure 4. Second harmonic generation imaging of a WS2 flake grown using CVD. The SHG imaging reveals that the flake is a polycrystal with each crystalline domain having a different SHG response due to differing number of layers, stacking symmetries and growth orientations. 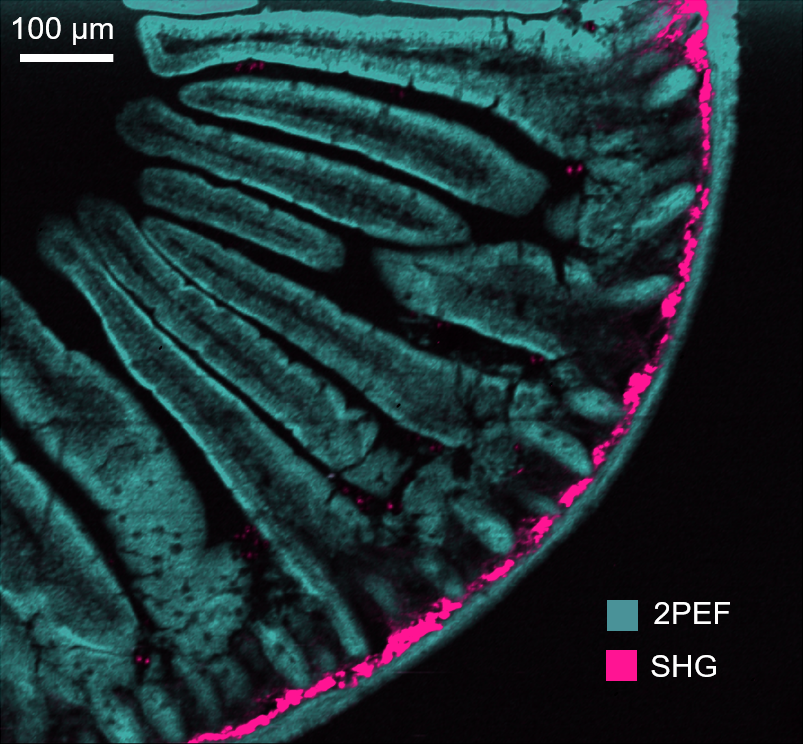 Figure 5. Second harmonic generation (SHG) and two-photon excited fluorescence (2PEF) imaging of a mouse intestine section stained with Alexa Fluor® 568. Second harmonic generation imaging setups can also be used for the complementary technique of two-photon excited fluorescence microscopy. The SHG at 520 nm and the 2PEF from the Alexa Fluor® 568 dye at 630 nm were captured simultaneously on the RMS1000 CCD camera. The SHG is from fibrillar collagen near the intestinal wall which has a strong SHG response.

If you have found this technical note interesting, be sure to sign up to our eNewsletter or follow us on social media using the links below to get the latest product news and applications from us first.