Professor Pravas Deria at Southern Illinois University, recently had a paper on MOFs published in the Journal of the American Chemical Society (JACS).

The paper; titled; ‘Excited-State Electronic Properties in Zr-Based Metal Organic Frameworks as a Function of a Topological Network’, investigated the role that topology plays in the photophysics of metal organic frameworks with the aid of the FS5 Spectrofluorometer and the Lifespec II Fluorescence Lifetime Spectrometer. The article below introuces the research done by Prof. Deria and his team, in collaboration with researchers from Kyoto University and the National Renewable Energy Laboratory.

Metal Organic Frameworks (MOFs) are a class of compounds made from metal ions coordinated to organic ligands to produce complex 2D or 3D structures (Figure 2). MOFs are currently being designed and investigated for a wide range of important technological applications including carbon capture, catalysis and hydrogen storage. Another promising application of MOFs, which is the focus of Prof. Deria’s paper, is light harvesting; where the MOF is used to absorb photons of light and this energy utilised for initiating photochemical reactions or charge generation in photovoltaics. MOFs are promising light harvesting materials due to their unparalleled flexibility in design, with the topology of the MOF influencing its photophysical properties. To successfully design Metal Organic Frameworks with the desired properties it is crucial to understand the role that the topology of the MOF has on the photophysics and establish structure property relationships. To aid with this understanding, Prof. Deria’s team investigated two zirconium based MOFs, named NU-901 and NU-1000, that are chemically identical but have different topologies (see Figure 2) in order to investigate the influence of topology on the photophysics of the MOF. 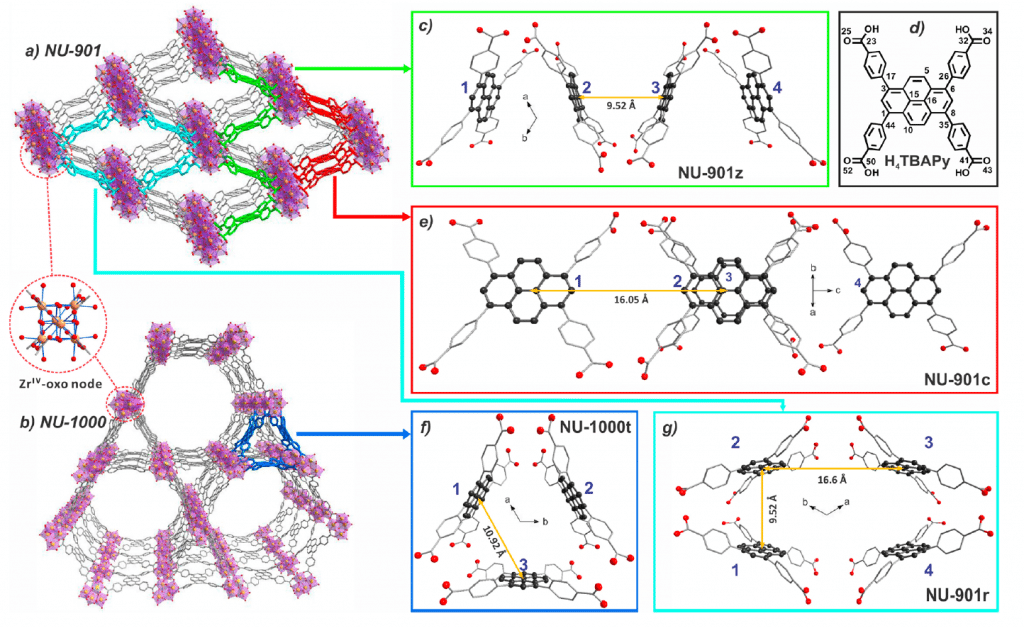 To determine this, they measured the fluorescence decays of NU-901 and NU-1000 dissolved in a range of solvents with different polarities using time-correlated single photon counting (TCSPC) with an Edinburgh Instruments Lifespec II (Figure 3). It can be seen that the fluorescence decay of NU-901 is essentially uninfluenced by the choice of solvent in contrast to NU-1000 where the solvent polarity causes a profound difference in the fluorescence decay, with more polar solvents (such as acetonitrile) resulting in a lower fluorescence lifetime. This result indicates that either the emissive states of NU-1000 themselves have polar character or low lying polar excited states are involved in the excited state dynamics.

Figure 3: Fluorescence decays of NU-901 (a) and NU-1000 (b) measured using TCSPC in various solvents with the Lifespec II Fluorescence Lifetime Spectrometer. The sample was excited at 405 nm from an EPL-405 pulsed diode laser. Solid lines are reconvolution fits taking into account the instrument response function of the laser and spectrometer. Reprinted with permission from J. Am. Chem. Soc. 2018 140 (33) 10488-10496. Copyright 2018 American Chemical Society. 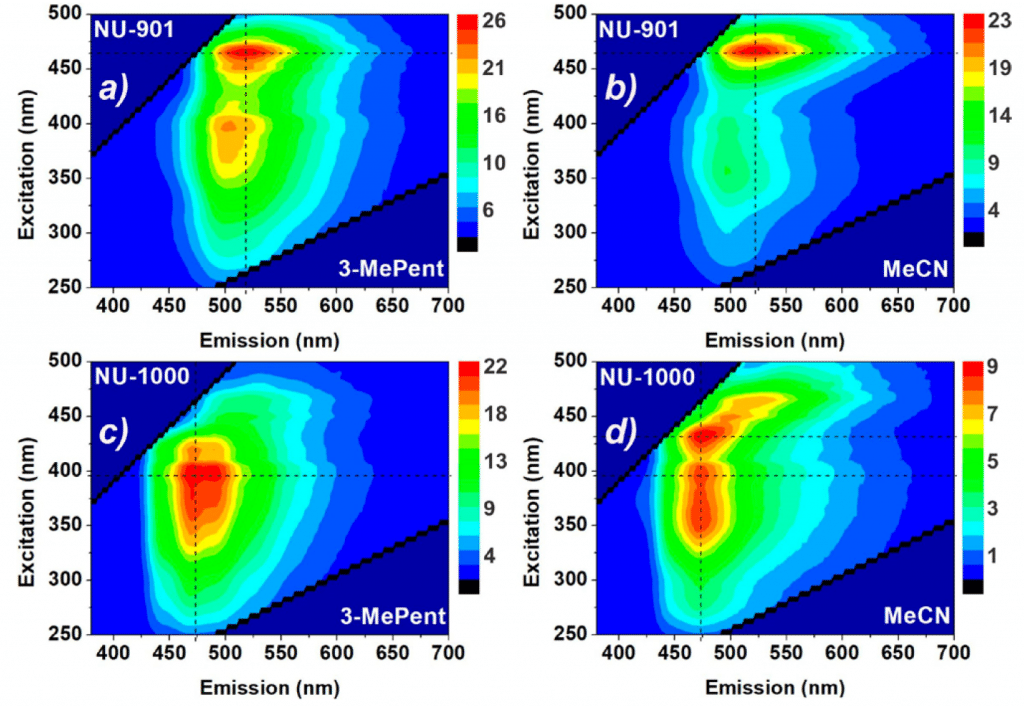 However, it can be seen from Figure 4 that that the relative contribution of the two excitation branches of NU-1000 (at 395 nm and 425 nm) is strongly dependent on the choice of solvent, with the 425 nm excitation branch becoming more pronounced in the more polar acetonitrile. To further investigate this, the absolute fluorescence quantum yield of NU-1000 and NU-901 were measured in different solvents using the SC-30 integrating sphere sample module of the FS5 (Figure 5).

It can be seen that the quantum yield of NU-1000 is much more susceptible to changes in solvent compared to NU-901. The fluorescence quantum yield is essentially a measure of the competition between radiative and non-radiative pathways in a material. The strong quantum yield dependence of NU-1000 therefore reveals that the choice of solvent alters the non-radiative recombination rate. This information in conjunction with electronic structure calculations, reveals that NU-1000 has low lying polar excited states to which the primary excited state is optically coupled. Excited state population can therefore be lost to these polar states and subsequently undergo non-radiative recombination, with the loss rate depending of the polarity of the solvent. This optical coupling to the polar excited states is responsible for the variation in lifetime of NU-1000 seen in Figure 3.

In summary, the research team led by Prof. Deria used fluorescence spectroscopy to uncover the complex photophysics of metal organic frameworks and will aid in the establishment of structure property relationships for these materials. In addition, it is an excellent example of the synergy between different fluorescence spectroscopy techniques being used to uncover a more complete picture of the photophysics of a material.

We are proud to have Professor Deria as one of our customers, and we would like to congratulate him and his team for this excellent achievement.

Excited-State Electronic Properties in Zr-Based Metal Organic Frameworks as a Function of a Topological Network”.

The research completed by Prof. Deria and his team, was carried out using the Edinburgh Instruments FS5 Spectrofluorometer, and the LifeSpec II Fluorescence Lifetime Spectrometer.