Quantum yield is a fundamental photophysical parameter that describes a sample’s fluorescence efficiency and is defined as the ratio of the number of photons emitted to the number of photons absorbed by a sample. Accurate and reliable quantum yield measurements are important for a broad range of applications including displays, solar cells, bioimaging and drug development. 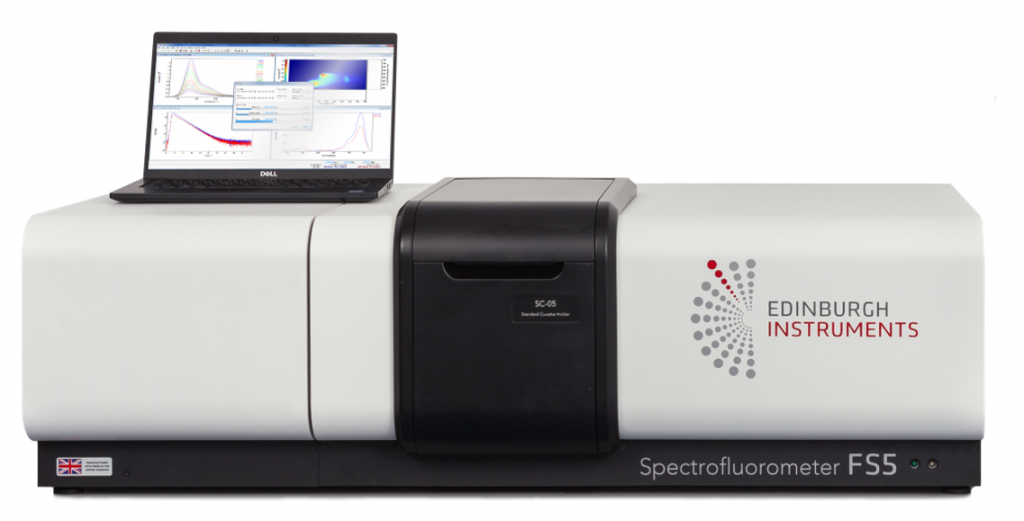 The relative quantum yield of 2 Aminopyridine can be calculated through the following formula,3

where the subscripts S and R denote sample of interest (2AMP) and reference standard (QBS), respectively. Φ is the quantum yield, I is the integrated fluorescence intensity, and A is the absorbance at the excitation wavelength. n is the refractive index of the solvents used for sample and reference solutions at the mean emission wavelength. In this application note, the same solvent (1 M H2SO4) was used for both 2AMP and QBS and this term cancels.

To increase the accuracy and precision of the calculated quantum yield value, it is best practice to prepare and measure several solutions of the sample and reference with different concentrations. By plotting I versus 1-10-A for 2AMP and QBS, the gradients (GradS and GradR) can be used to calculate the quantum yield (Eq.2). This approach prevents potential systematic errors, such as dye aggregation, which would appear as a deviation from the straight line at higher concentrations.

Five solutions of 2AMP in 1M H2SO4 and five solutions of QBS in 1M H2SO4 at different concentrations were prepared. Absorption and fluorescence spectra were measured using an FS5 Spectrofluorometer equipped with a 150 W Xenon lamp, a PMT-980 detector and a SC‑05 cuvette holder.

Firstly, the absorbance values of the five 2AMP and QBS solutions were determined by measuring the absorption spectra using the FS5’s built-in transmission detector. The absorbance values of the solutions were kept below 0.1 at the excitation wavelength (310 nm) to minimise the probability of inner filter effects and ranged between 0.008 and 0.098. The normalised absorption spectra of 2AMP and QBS are shown in Figure 2a.

The fluorescence spectra for each concentration of 2AMP were combined into a single plot in Fluoracle (Figure 2c). The gradient GradS in Eq.2 can be calculated from the 2AMP spectra in Figure 2c using the Fluoracle Trend Analysis feature which is shown in Figure 3.

To calculate GradS the Calibration parameter was set to Area (orange frame) and (optionally) the Variable name was set as 1‑10‑A (green frame). The areas (integrated fluorescence intensity) are calculated by pressing Apply. The absorbance term (1-10-A) values for each concentration of 2AMP that were obtained from the absorption spectra were then input (light blue frame). 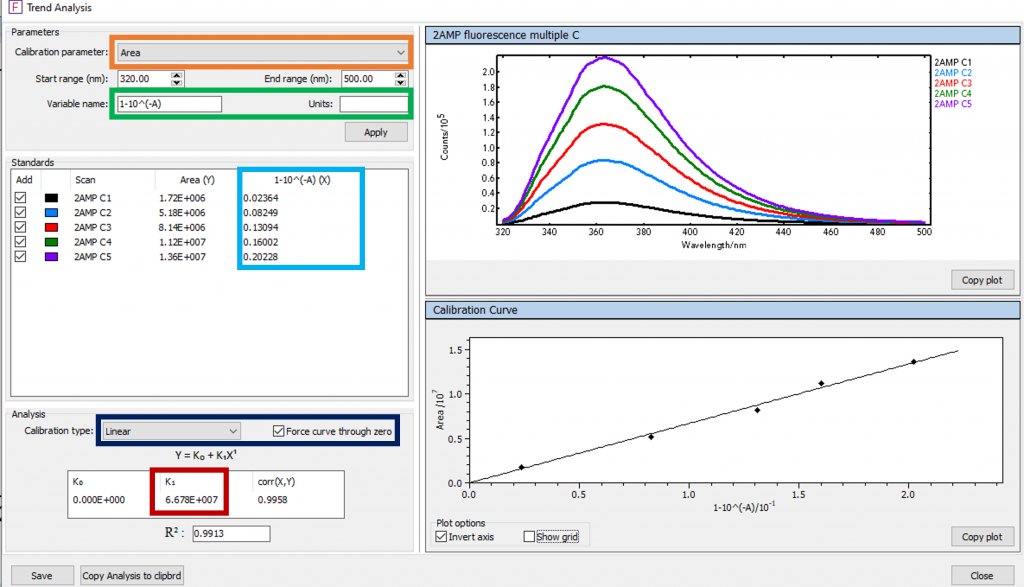 The Calibration type was set to Linear and the Force curve through zero box ticked (dark blue frame). The integrated fluorescence intensity versus absorbance term is plotted on the lower right side of the screen, along with the linear fit. The gradient of the curve (GradS) is given as K1 (red frame). The same process was then repeated for the five QBS spectra to calculate the gradient GradR. Both curves and their calculated gradients are shown in Figure 4. 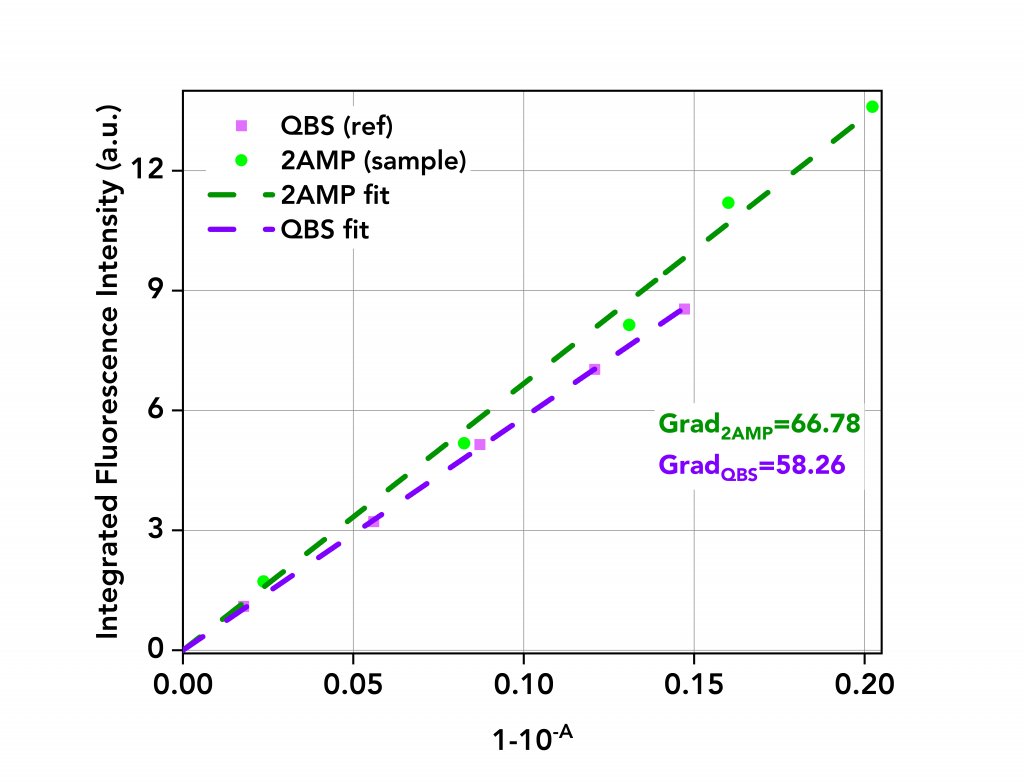 An Edinburgh Instruments FS5 Spectrofluorometer was used for the determination of the quantum yield of 2-Aminopyridine in 1M H­2SO4 via the relative method. The data analysis was made simple by the Trend Analysis feature of FS5 Fluoracle software. The quantum yield of 2-Aminopyridine, using Quinine Bisulphate as the reference standard, was calculated to be 64.3%. This value closely agrees with previous reports in the literature and demonstrates that the FS5 can undertake accurate and reliable relative quantum yield measurements.

If you have enjoyed this application note and would like to be the first to know about our future research articles, please take a moment to join us on social media – LinkedIn, Twitter, Facebook – and sign up to our infrequent eNewsletter via the link below.