Map of the Month – Convallaria

Welcome to Edinburgh Instruments monthly blog celebrating our work in Raman, Photoluminescence, and Fluorescence Lifetime Imaging. Every month we will highlight our pick for Map of the Month to show how our spectrometers can be used to reveal all the hidden secrets in your samples.

The development of fluorescence microscopy in the early 20th century sparked a new era for the field of biological microscopy. The technique allowed scientists to use fluorescent dyes and tags in biological cells to visualise specific structures and molecules. We’ve moved on leaps and bounds since the initial discovery, and now can offer detailed information on biological samples using fluorescence intensity and fluorescence lifetime imaging.

As microscopy progressed, lasers were also being significantly developed, allowing multiphoton imaging technique such as two-photon excited fluorescence (2PEF). The technique utilises femtosecond pulsed infrared excitation light to generate shorter wavelength light to image the sample. In 2PEF, two infrared photons are simultaneously absorbed by a fluorophore promoting it to an excited state which then radiatively relaxes emitting a shorter wavelength fluorescence, Figure 1. 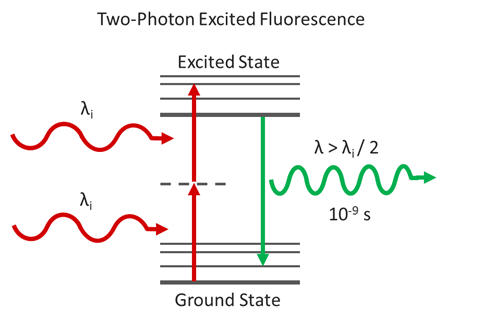 The Edinburgh Instruments RMS1000 Confocal Raman Microscope has external laser coupling ports that enable the optical coupling of mode-locked femtosecond lasers into the microscope. Additionally, the RMS1000 can be configured with both a CCD camera and a photon counting detector for spectral and lifetime two-photon microscopy respectively.

A convallaria rhizome slide stained with acridine orange was placed under the confocal microscope of the RMS1000. The acridine orange was excited at 10 MHz using the pulse picked 1040 nm femtosecond laser output and the fluorescence decay measured on the RMS1000’s Hybrid Photodetector using TCSPC. The integrated fluorescence intensity of the decay is shown in Figure 2 (a) and the fitted lifetime in (b), highlighting the increased local environment information that can be obtained from fluorescence lifetime imaging. The FLIM map reveals variation in lifetime across the lignifies and pectin rich cell walls.

Figure 2: Two photon intensity (a) and lifetime (b) imaging of a convallaria rhizome.