Transient absorption (TA) spectroscopy, also known as flash photolysis, is a pump-probe spectroscopic technique utilised to measure the photogenerated excited state absorption energies and associated lifetimes of molecules, materials, and devices. The pump-probe technique can be described by a sample being photo-excited by a light source (pump pulse), whereby a second light source (probe pulse) is measured for changes in absorption as a function of wavelength and time. The technique focuses on measuring excited singlet and triplet states, electron and energy transfer mechanisms, and photo-product reactions, to name a few. It has broad implications to photochemical science, from understanding the light-harvesting mechanism of photosystem-II (PS-II) in plants, to signalling of the human retina, to optimising solar cells and light driven photo-catalysis.

The technique was first published in 1950 by George Porter and Ronald G. W. Norrish, who discovered that high-intensity flash tubes used in World War II for aerial photography could be utilised to initiate a light-activated reaction.1 This seminal work, along with additional studies earned them a share of the 1967 Nobel Prize in Chemistry, notably “for their studies of extremely fast chemical reactions, effected by disturbing the equilibrium by means of very short pulses of energy”.

Before then, reaction kinetics had been limited to timescales of hundreds of milliseconds using the stopped flow technique, but transient absorption enabled measurements in the microsecond range. Their pioneering work opened up a new field as it allowed the study of fast photochemical reactions. Transient absorption has continued to develop since its discovery with increasing time resolution, reaching the femtosecond scale in the 1990s thanks to advances by Nobel prize winner Ahmed Zewail.

Nanosecond TA (nsTA) is commonly referred to by its original name, flash photolysis, although it does not always involve photodissociation. There are two timescales that present different instrumentation needs and challenges, nsTA and ultra-fast, femtosecond TA (fsTA); both are also referred to as pump-probe spectroscopy and the data reported in both show photogenerated transient kinetics and spectra varying timescales. fsTA is often used to probe singlet excited states and fast processes such as photoisomerization, solvent relaxation, and charge injection. In contrast, nsTA is employed for studying triplet states, energy transfer, electron transfer radicals, back electron transfer, and triplet-triplet annihilation in everything from biomolecular reactions to solar cell efficiency.

Edinburgh Instruments specialises in nsTA measurements, with measurable lifetimes from approximately 5 ns to seconds. Excited states are generated by an excitation pulse of light (pump pulse), and the spectra and lifetimes of the transient species are measured as a change in a baseline of light (probe pulse) at the desired wavelength(s). This method typically employs a high energy Nd:YAG laser as the pump source, and a white light halogen bulb and monochromator or an individual wavelength LED as the probe source. Lifetimes are typically monitored using a photomultiplier tube’s (PMT) response as recorded by an oscilloscope, and transient absorption spectra can either be generated from the PMT responses at individual wavelengths, or more quickly by utilising an intensified-CCD (ICCD) camera to acquire time-gated transient spectra.2 Figure 2 gives an example of the measurement. 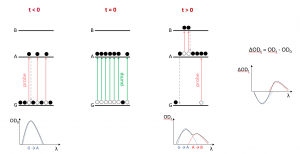 Figure 2 shows the simple case of a sample with a ground state (G) and excited states (A and B), and a nanosecond transient absorption spectrometer featuring a white light probe source and a single-wavelength pump laser. After the sample, the probe beam passes through a monochromator allowing the ground and excited absorbance changes of the sample to be measured at a particular wavelength.

The pump pulse reaches the sample at t = 0 and creates a high, non-equilibrium population in the excited state A.

The transient absorption spectrum ΔODt measures the difference between ODt and OD0 and represents the change in absorption effected by the pump laser pulse. As the sample relaxes back into the G state, its ΔOD spectrum changes with time, eventually reaching zero.

1. Porter. Flash Photolysis and Spectroscopy. A New Method for the Study of Free Radical Reactions, Proceedings of the Royal Society of London. Series A, Mathematical and Physical Sciences 200 284 (1950)

The Edinburgh Instruments LP980 Transient Absorption Spectrometer is the world’s only turn-key nsTA system allowing for direct spectral and kinetic transient absorption measurements in the nanoseconds to seconds time range utilising both PMT and ICCD detectors, mounted simultaneously on a dual monochromator/spectrograph platform. Furthermore, it is the only instrument that incorporates a pulsed high energy Xe-flashlamp, allowing for low ΔOD measurements in the faster nanosecond time regime.

Discover more about the LP980 here.

If you have enjoyed reading our article about transient absorption and pump probe and would like to keep up to date with our latest articles, research and product news, why not sign up to our monthly eNewsletter via the Sign-Up button below. Alternatively, join us on your favourite social media channel.