How to Choose Your Lasers for Raman Spectroscopy | Quick Guide

In Raman spectroscopy, laser excitation choice is one of the most important considerations. The wavelength chosen will impact Raman intensity, spatial resolution, background fluorescence, acquisition time, and the potential cost of a Raman system. Lasers used in Raman spectroscopy range from the UV into the near-infrared and beyond. Different wavelength regions offer advantages and disadvantages with the final laser selection largely dictated by the sample being studied. Some samples can be analysed at any wavelength with no issues, for example toluene, but for many samples laser wavelength choice is crucial for high quality Raman spectra e.g. polymers with high fluorescence backgrounds.

How does the excitation wavelength affect Raman intensity?

Raman scattering is an inherently weak phenomenon, relying on photon-phonon interactions in the sample.  Raman scattering intensity is proportional to λ-4, where λ represents laser wavelength. Therefore, as the laser wavelength is increased, the Raman scattering intensity will fall. Comparing a UV and near-infrared laser, the intensity of the spectrum acquired from a near-infrared laser can be in the order of 15 times less intense. Thus, UV and visible lasers require shorter accumulation times and can be used at lower laser power compared to their near-infrared counterparts. Figure 1 shows the difference in Raman intensity between a 638 nm laser and a 785 nm laser using a silicon sample under the same conditions. Edinburgh instruments Raman systems can incorporate lasers covering the UV to near infrared regions.

Figure 1: Silicon spectra measured on the RM5 Raman Microscope with a 638 nm laser (orange) and a 785 nm laser (red) under the same conditions

How does the excitation wavelength affect the fluorescence background?

Commonly, the detailed information from the Raman spectrum is hidden by high background fluorescence. Fluorescence can arise from the sample, the substrate, or optical elements such as the objective. Fluorescence is far more likely to occur than Raman scattering, producing a much more intense signal that can effectively hide the Raman signal. To avoid fluorescence, different excitation lasers can be chosen, with near-infrared lasers being preferred. Fluorescence is an absorption process and fewer molecules absorb in the near-infrared. Additionally, fewer molecules absorb in the near-infrared region compared to the visible region. The most commonly used laser wavelength in Raman spectroscopy is 785 nm which offers low fluorescence whilst retaining relatively high Raman intensity. However, for samples which suffer from large fluorescence backgrounds, such as dyes, a 1064 nm laser may be needed. This laser would generally only be used if the fluorescence is extremely high due to the reduction in Raman intensity and risk of sample damage from a more powerful laser. Figure 2 shows the same material measured with two different excitation wavelengths (532 nm and 785 nm). The spectra reveal the fluorescence suppression that can be achieved when using the most appropriate laser. The 785 nm laser reveals peaks that are masked by the high fluorescence background seen when using the 532 nm laser. A significant advantage of the RM5 Raman Microscope is its ability to house up to 3 fully integrated lasers. This gives the user the option to quickly determine the optimal laser for fluorescence reduction. 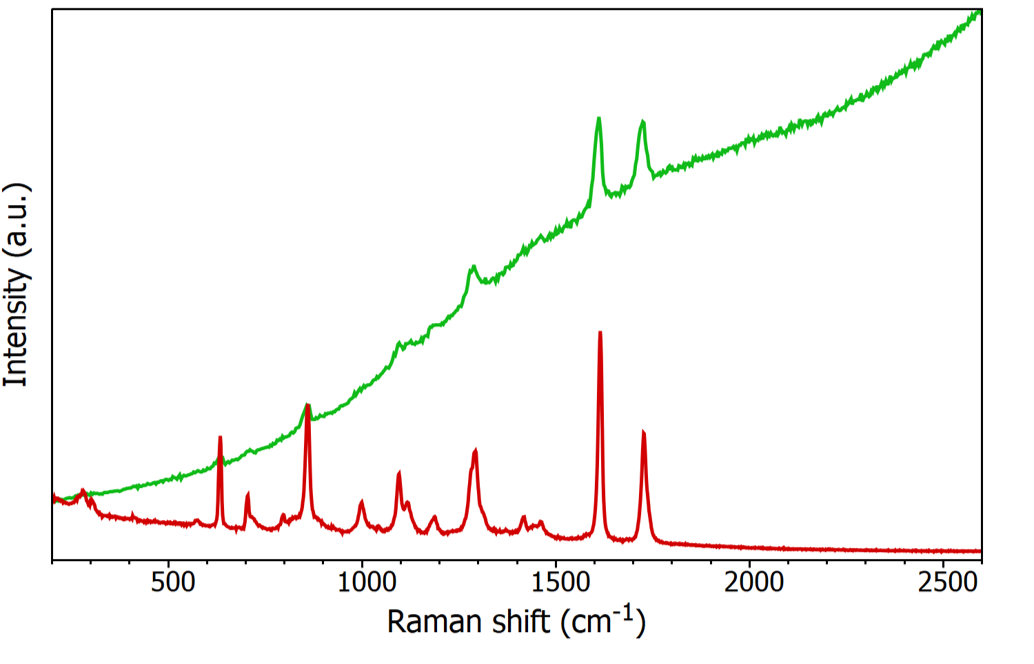 Figure 2: Nicotine patch spectra measured on the RM5 Raman Microscope with a 532 nm laser (green) and a 785 nm laser (red)

How can laser choice affect the sample?

When using prolonged exposure times or lasers with higher energy there is an increased risk of sample damage. A UV laser has increased energy over a visible laser. The energy per photon is much higher and can result in sample damage. The damage can change the interaction of samples and thus change the Raman spectra, or it can be as severe as burning the sample.

Near-infrared lasers, e.g. 1064 nm, also carry an increased risk of sample damage over visible lasers. These lasers have higher power and due to the weaker scattering seen at higher wavelengths, longer exposure times to the laser are often required. This increases the chance of the laser damaging the sample. In these situations, the laser power can be lowered but in doing this the signal to noise ratio is worsened. The safest laser region to use to protect the sample from laser damage is the visible region. Figure 3 shows a burn mark appearing on a thin-film sample after being exposed to a near-infrared laser (785 nm).

How will laser choice affect the Raman system?

The most commonly used excitation laser is 785 nm. This is mainly due to the compromise offered between Raman scattering intensity and fluorescence suppression. Additionally, it is common for Raman systems to be fitted with a visible excitation laser as well, typically 532 nm. Edinburgh instruments RM5 Raman Microscope can house both of these lasers (and up to 3 in total) and their optimal gratings with no compromises having to be made. The RM5 also comes with a computer-controlled continuous laser beam attenuator to allow control over the laser power exposed to the sample.

When lasers in the UV and higher wavelength near-infrared regions are used there are configuration considerations to be made. These adaptations can impact the cost of the system and can have an effect on the quality of the spectra.

Typical Raman systems use a silicon CCD detector. Their efficiency starts to drop rapidly above 800 nm becoming inefficient above 1000 nm. Therefore, when a 1064 nm laser is used an InGaAs detector is required. These detectors are more expensive than the standard CCD and also give lower sensitivity and higher noise. The RM5 can house up to 2 detectors at one time.

UV lasers require specific gratings, mirror coatings, UV-enhanced CCD detector and microscope to be used. Adapting the Raman system for UV Raman spectroscopy will incur additional costs to the system. UV lasers are also more expensive than visible and near-infrared lasers. They are also much larger in size which is an important consideration for installing a Raman system.

All of the lasers discussed can be used to acquire Raman spectra. The sample will dictate whether fluorescence suppression is required, to what degree, and how sensitive the sample is to damage.

A UV laser below 300 nm will offer very high scattering intensity with little to no fluorescence interference. However, it comes with the risk of burning or degrading the sample and an increased price compared to standard lasers in the visible and near-infrared regions. Typically, UV lasers are useful for looking at thin surface layers in silicon and for resonance Raman in biological samples.

Lasers in the visible region provide high Raman scattering, but also higher fluorescence backgrounds. This region contains common general-purpose lasers found in Raman systems due to the higher signal achieved and reasonable cost of the lasers. There is a very low risk of any sample damage. Excitation with 532 nm is particularly good for the study of metal oxides and inorganic materials. The other common excitation wavelength in typical Raman systems is the near-infrared, notably 785 nm – the most common in Raman systems. These lasers will offer less Raman scattering intensity, but with lower fluorescence effects.

In the longer wavelength near-infrared region a 1064 nm laser offers fantastic fluorescence suppression. However, it has much lower scattering intensity compared to all other lasers requiring higher laser power and therefore increasing the risk of sample damage.  Using a 1064 nm laser requires the use of an InGaAs detector, which in turn means decreased sensitivity compared to the lasers using a traditional silicon CCD and additional costs. Typical samples requiring a 1064 nm laser include dyes, pigments, and edible oils.

The truly confocal design of Edinburgh Instruments RM5 Raman microscope is unique to the marketing. Compact and fully automated, it is the perfect instrument for analytical and research purposes. Discover the RM5 Raman Microscope.