The pinhole is the defining feature of a Confocal Raman Microscope, providing major advantages in spatial resolution and imaging contrast over a conventional optical microscope.

Why is a pinhole required?

When laser light is focused into a sample by a Raman microscope, a three-dimensional excitation volume is formed within the sample. This volume is known as the excitation point spread function (PSF) and a representation of its shape is shown in Figure 1a. As the light converges towards the focal point, the diameter of the PSF decreases, reaching a diffraction limited minimum diameter at the focal plane followed by an increase in diameter as the light diverges.  The exact shape of the PSF is heavily dependent on the optical properties of the sample such as opacity at the excitation wavelength, refractive index, and how it scatters the incident excitation. Raman scattering will occur throughout the entire excitation volume and simply measuring the Raman spectrum from this excitation would, therefore, result in spectral contributions from the entire volume with limited axial (Z-axis) discrimination. 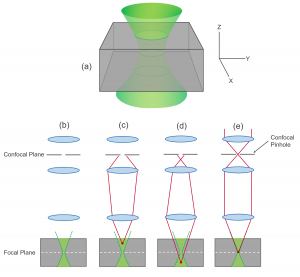 Role of the Pinhole

The greatest advantage of using a confocal pinhole is the axial (along the Z-axis) resolution it provides. The pinhole limits the detected Raman scatter to a thin volume slice centred on the focal plane. The microscope can, therefore, be focused to the depth of interest inside a sample and the Raman spectrum measured from around the chosen focal plane only. By scanning the microscope stage across the lateral (X-Y) plane, a 2D Raman image of the focal plane region, an optical section, can be created which enables the chemical composition deep inside a sample to be imaged non-destructively. The pinhole is essential for this, as without it the out of focus Raman scatter would also be detected resulting in a blurry image with poor axial resolution; the pinhole increases the image contrast and improves the axial resolution.

The microscope stage can also be scanned along the Z- axis to change the depth of the focal plane within the sample. The variation in the Raman spectrum can be measured as a function of Z to generate a depth profile, showing how the chemical composition changes axially through the sample. This is particularly useful for analysing multilayer samples such as composite plastics as shown in Figure 2.  The PET and PVC polymers have unique Raman spectra and the Raman depth profile can identify the discrete layers within the PET-PVC-PET polymer stack. 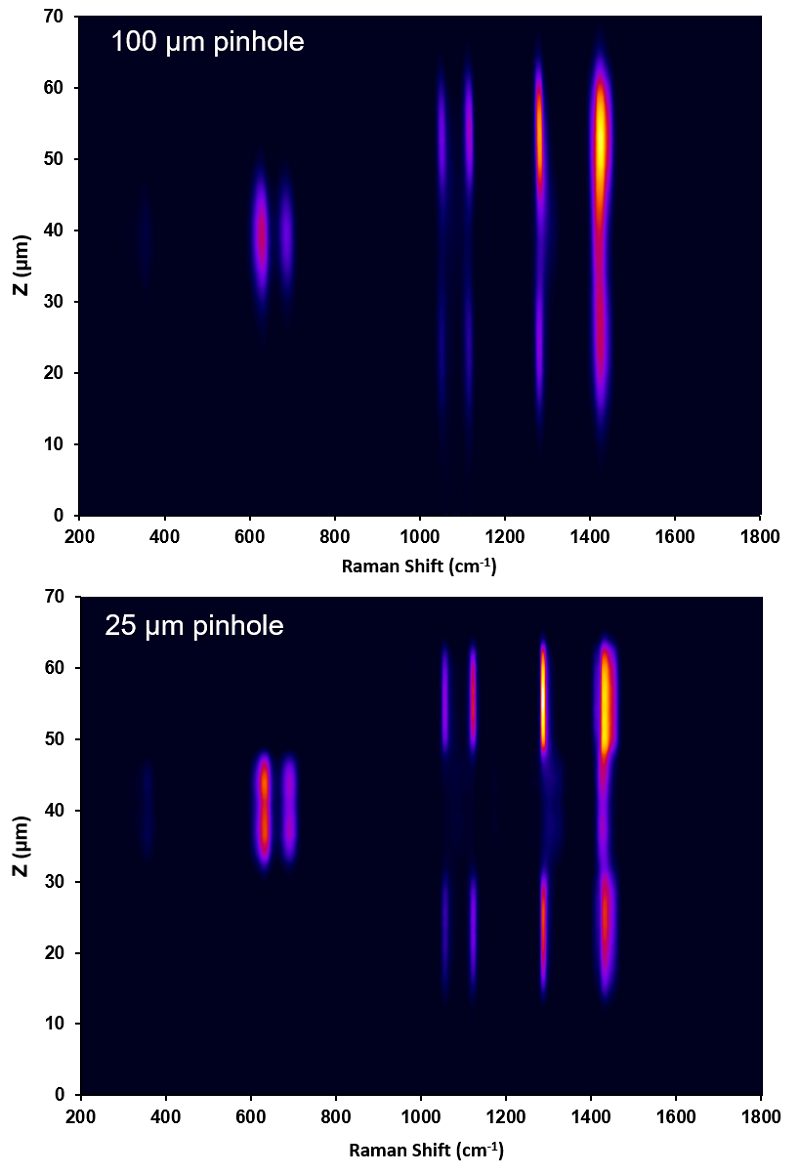 Figure 2 Raman depth profile of a multilayer polymer sample comprised of a PET-PVC-PET stack measured using a 532 nm laser and a 100x 0.90 NA objective As the pinhole diameter is decreased from 100 μm to 25 μm the layer discrimination improves due to improved axial resolution.

Figure 2 contains two images labelled 25 µm and 100 µm which refers to the diameter of pinhole used for each measurement. As the diameter of the pinhole is decreased it becomes increasingly effective at blocking the out of focus scatter (increased confocality) and the effective axial resolution improves. This can clearly be seen in Figure 2; the 100 μm depth profile is blurred with poor discrimination between the polymer layers while the 25 μm profile is much sharper due to improved axial resolution. Using narrow pinhole diameters, axial resolutions of < 1 µm can be achieved.  The trade-off with narrowing the pinhole diameter is that the throughput of the microscope is significantly lowered and measurements will therefore take longer due to decreased Raman scatter intensity at the detector. Due to this trade-off, most Raman microscopes use a variable diameter confocal pinhole enabling the microscope mode to be adjusted from high confocality / low throughput to non-confocal / high throughput depending on the application.

The confocal pinhole can in principle also improve the lateral (the X-Y plane) diffraction limited resolution of the microscope due to the convolution of the excitation PSF with the pinhole aperture. There are several ways to define the lateral resolution but the most useful when comparing conventional and confocal microscopes is the FWHM of the effective PSF (convolution of the excitation and detection PSFs) of each microscope. A comparison of the width of the effective PSF of a conventional and confocal microscope with an infinitely small pinhole diameter is shown in Figure 3; showing the maximum possible resolution improvement of ~40% that can be achieved using a pinhole.

An infinitely small pinhole is of course not realistic and the resolution improvement will be less than this in practice. Achieving an improvement beyond that of a diffraction limited conventional microscope is therefore possible but the pinhole needs to be set to one of its smallest diameters at the significant cost of low throughput. 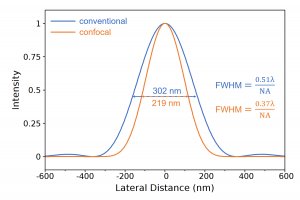 Figure 3 Effective PSF of a conventional and confocal microscope in the X-Y plane with 532 nm excitation and a 100x 0.9 NA objective. Simulation assumes both microscopes are diffraction limited and an infinitely small pinhole diameter.

In real world samples the lateral resolution is frequently limited by poor image contrast rather than the diffraction-limited optics of the microscope; and the true advantage the pinhole provides for lateral resolution is improving the contrast of the images through stray-light suppression. Figure 4 shows a Raman image of polystyrene spheres on a silicon substrate and the pronounced improvement in the visualisation of the beads as the pinhole diameter is decreased is evident. The ability of the pinhole to block out of focus scatter and other unwanted background light, such as fluorescence, decreases the background and increases the image contrast; improving the effective lateral resolution dramatically.

Figure 4 Raman surface profile of 3 μm polystyrene beads on a silicon substrate measured using a 532 nm laser and 100x 0.90 NA objective. As the pinhole diameter is increased the contrast and resolution are improved.

What is Confocal Raman Microscopy?