VIEW ALL PRODUCTS
Blog What is Quantum Yield?

What is Quantum Yield?

The IUPAC definition of quantum yield (Φ) is the number of a certain event occurring per photon absorbed by the system,1

However, it is most commonly written specifically for the emission of light (photoluminescence) by a system,2-5

This narrower definition is often simply called quantum yield; with the emission of light being implicit given the context. However, the terms fluorescence, luminescence and photoluminescence quantum yield are also commonly used. The quantum yield is reported as either a decimal fraction between 0 and 1 or as a percentage. For example, if the system absorbs 100 photons and emits 30, then its quantum yield would be is 0.3 or 30%. 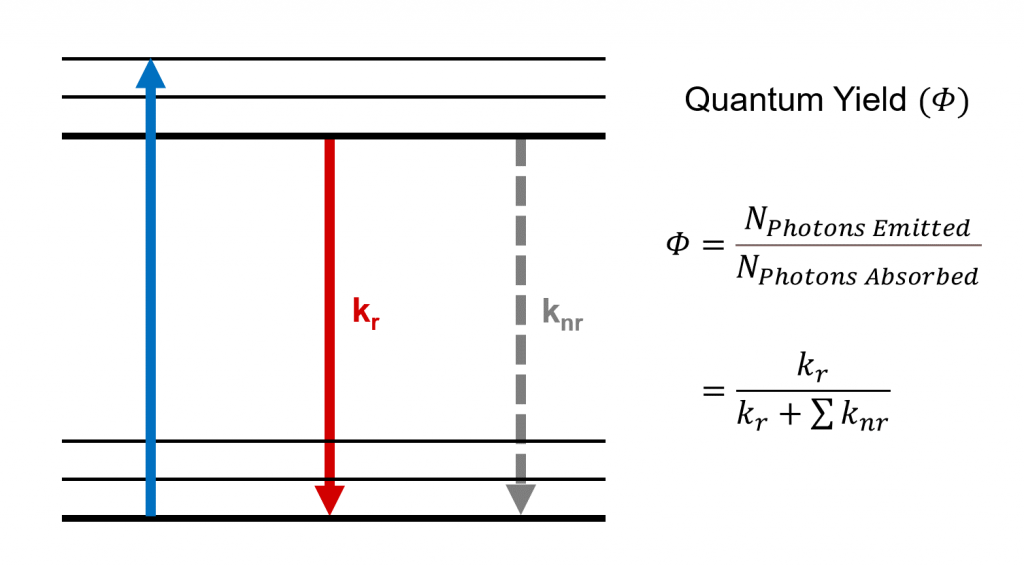 The quantum yield of a system (such as a fluorescent molecule) is determined by the balance between the radiative and non-radiative transition rates within it (Figure 1). The quantum yield can therefore be rewritten in terms of these rates,

), includes processes such as internal conversion, intersystem crossing, and energy transfer.6 The quantum yield is therefore the probability that a system in the excited state deactivates through a radiative process to its ground state.

The roots of quantum yield can be traced back to the beginning of the 20th century when Einstein’s revolutionary work on the photoelectric effect was published in 1905 (a copy of his paper translated in English can be found in Ref. 7). Einstein introduced the quantisation of light, i.e., a light beam consists of discrete quantum particles (quanta) carrying energy equal to

is Planck’s constant and

the light frequency. A few years later, E. G. Warburg published a series of papers over the period 1912-1921 in which he studied the conversion of ozone molecules into oxygen to acquire the ratio of the molecules produced to quanta absorbed. He later named this procedure “quantum efficiency” and used the Greek letter phi (Φ) to denote it.8 His papers (in German) can be found on the German National Library website.9 In 1924, Vavilov referred to the term “fluorescence yield”, based on Warburg’s earlier work, to calculate the fraction of absorbed rays of light to fluorescent rays of light,10 whereas the term “molecules per quantum light absorbed” appears in a paper published in 1925 by Marshall to describe the photochemical reaction between hydrogen and chlorine.11 By 1930 the term “quantum yield” as we know it today had been widely cited in a large number of textbooks and papers.

How to Measure Quantum Yield?

Quantum yield is one of the most important photophysical parameters when characterising luminescent molecules and materials. High quantum yields are crucial for a wide range of applications including; displays, lasers, bioimaging and solar cells, and accurate measurement of the quantum yield is therefore important.  Quantum yield measurements can be split into non-optical and optical methods. Non-optical methods include the indirect measurement of the conversion of the excitation energy into heat and its dissipation to the solvent,6, 12 and calorimetric methods, such as photoacoustic spectroscopy (PAS),13 and thermal lensing.14 These methods require specialised setups and are generally reserved for the determination of the quantum yield of important standards. Quantum yields are therefore most commonly measured optically, using either the relative or absolute method.

The advantage of the relative method is that it can be readily applied using standard commercial absorption and fluorescence spectrometers equipped with a simple cuvette holder (Figure 2). The downside is that a reference standard must exist that emits in a similar wavelength region to the sample, and the sample type is generally limited to transparent liquids.

In the absolute quantum yield method, an integrating sphere is used to capture all light emitted by the sample, avoiding the need for a reference standard. The quantum yield is determined by comparing the number of emitted photons with the number of absorbed photons. The advantage of the absolute method is that no reference standard is required which results in a faster measurement of the quantum yield (since fewer measurements are required) and a broader range of emission wavelengths are accessible that are no longer limited to where reference standards exist. Secondly, the absolute method can also be applied to a much larger range of sample types and is the only reliable method for samples such as scattering solids. The downside is that an integrating sphere is required for the measurement, however, these have become increasingly common and are now available as accessories for benchtop fluorescence spectrometers (Figure 3).

For further information and to find out how it can be used in your own research view the FS5 Spectrofluorometer online.  If you would like to talk to one of our sales team please contact us. We’d be delighted to help.

If you have enjoyed reading this, why not sign-up to our monthly eNewsletter via the button below or follow us on your favourite social media channel in the footer below to keep up to date with our latest news and research.

Map of the Month - October