VIEW ALL PRODUCTS
Blog The Life of C.V. Raman

The Life of C.V. Raman

Chandrasekhara Venkata Raman, the man responsible for discovering the Raman effect, paved the way for the modern Raman Microscopes that Edinburgh Instruments manufactures today. In honour of his birthday, we take a look into the path that led to the scattering discovery and all achievements thereafter. 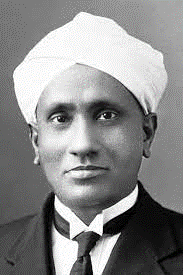 C.V. Raman was born on the 7th of November 1888, in Trichinopoly (now Tiruchirappalli), India. His father, a mathematics and physics teacher, and later lecturer at a college, sparked an initial curiosity into science for C.V. Raman. He frequently borrowed his fathers’ old books and books from the college library. At just 14 years old Raman moved to the city of Madras (now Chennai) to study for his bachelor’s degree at Presidency College. After completion of this degree, with honours in physics, Raman was awarded a scholarship and remained at Presidency College to study for his master’s degree where his intelligence and potential were obvious. He published his first academic paper in 1906, aged just 18. A year later he graduated his master’s degree with the highest distinction. 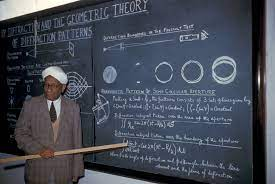 Despite his keen interests and obvious potential for a scientific career, Raman’s family were in debt and his brother convinced him to become a civil servant where he could earn a high wage. For the next 10 years Raman worked in the Indian Finance Department and in his free time researched the physics of stringed instruments and drums at the Indian Association for the Cultivation of Science. He also gave public lectures in Calcutta, where he was now based. These lectures combined with his part-time research drew a lot of attention and in 1917 the University of Calcutta offered him the Palit Chair of Physics. Aged 28, and taking a pay cut, Raman finally moved into a full-time scientific role. This move caused some tension at the University as Raman had no PhD and had never studied abroad. In 1921 he received the first of many honorary doctorates. 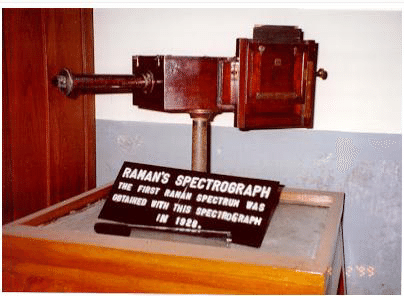 Raman’s inspiration for the study of scattered light came from the sea. Raman didn’t quite believe Rayleigh’s discovery that the sea’s colour was simply a reflection of the sky’s colour. Travelling back to India from Europe in 1921, equipped with just a prism, spectroscope, and a diffraction grating, he concluded that the sea was in fact scattering light. Raman reported his findings in a letter to the journal Nature and focused his laboratory’s research into light scattering. Rayleigh scattering is elastic – meaning the photons of light do not lose any energy and the light stays the same colour, explaining why the sea is blue. Raman was more interested in investigating inelastic scattering – where the photon would change in energy and therefore a different colour of light would be observed.

Raman and his students first saw the new phenomenon, later termed Raman scattering, weakly in 1923 when testing a variety of liquids with monochromatic light. In 1927 they found light scattered by glycerol produced a strong colour change, and importantly noted the light scattered was polarised meaning this was not fluorescence. On the 28th of February 1928 Raman and Krishnan (the co-discoverer of Raman) obtained the first spectra for this new scattering separate from the incident light, using Raman’s own invention – the spectrograph. This is what became known as the Raman effect and in 1930 Raman was awarded the Nobel Prize in Physics for this discovery. A destiny he always knew was meant for him – in 1924 when asked what his future plans were, he quickly replied “The Noble Prize of course.” In 1930 he was so confident, he’d booked his ticket to Sweden in July for the prize giving long before the announcement of the winner in November. 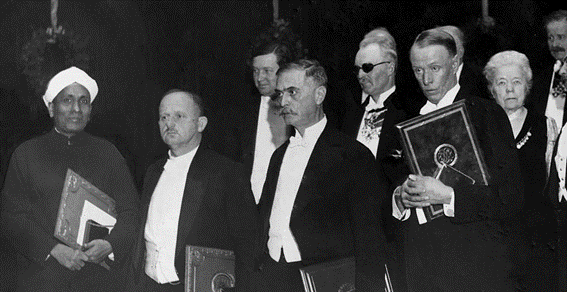 Raman was a scientist held in extremely high regard; Lord Rutherford was behind his Nobel Prize nomination. He was knighted in 1929 for his discovery and continued to win scientific awards throughout his career. The 28th of February, the day the Raman effect was officially discovered, is celebrated annually in India as the National Science Day. In 1948 Raman founded the Raman Research Institute in Bangalore, where he worked until his death in 1970.

Raman spectroscopy has continued on a path of research and development since its original discovery. It is used in all application areas from cancer research, to materials, to pharmaceuticals. Raman instruments range from small handheld spectrometers to research grade Raman microscopes like those manufactured at Edinburgh Instruments.

Find out more about our RM5 and RMS1000 Raman Microscopes. If you would like to talk to one of our sales team and find out how our Raman Microscopes can be used within your own research, please contact us.

Interested in learning more about Raman Microscopy? Check out our learning centre and application notes for our full collection on Raman or check out some of the key articles below.

What is Raman spectroscopy?

What is a confocal Raman microscope?

Map of the Month - November