As photoluminescence (PL) research evolves, so does the demand for sensitive instrumentation to measure increasingly weak PL signals. Besides photon-counting detectors and monochromators with good stray light rejection, the source used to excite the sample is a key component to consider when designing an experiment. Picosecond pulse diode lasers and sub-nanosecond LEDs are the traditional source of choice for Time-Correlated Single Photon Counting (TCSPC), a technique employed to measure PL decays in the range of ps – µs. Time-resolved PL spectrometers from Edinburgh Instruments can be equipped with a wide variety of pulsed lasers and LEDs, capable of operating in TCSPC as well as Multi-Channel Scaling (MCS) mode: the EPL, EPLED, VPL, VPLED, and HPL series. 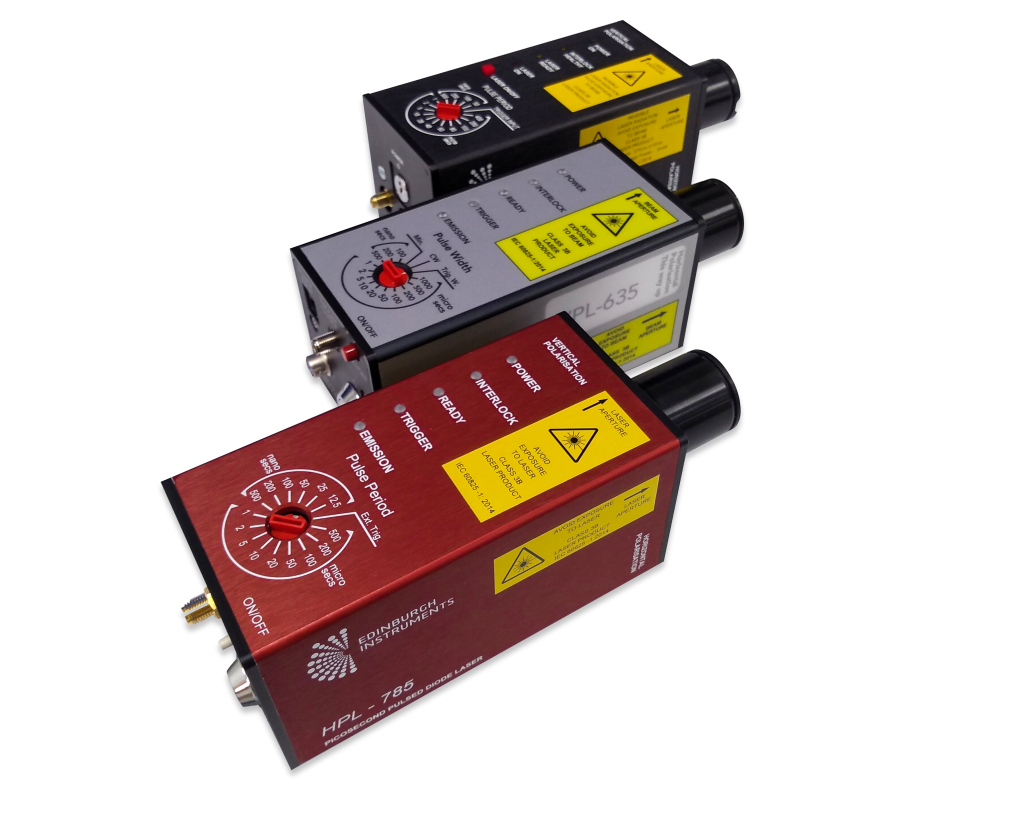 EPL diode lasers are widely employed for time-resolved PL, offering repetition rates up to 20 MHz and typical pulse widths of ~100 ps. They are available in wavelengths from 375 nm up to 980 nm. Pulse diodes of the EPLED series feature longer pulse widths (<1000 ps) and lower power than EPLs, but they cover UV wavelengths down to 250 nm, as well as the green region of the spectrum not provided by EPLs. Both EPLs and EPLEDs can operate in TCSPC mode for photoluminescence lifetimes of 10 ps – 50 µs, and in MCS mode for lifetimes in the range of 10 ns – 400 ms. This versatility makes them suitable for the majority of time-resolved PL experiments: a combination of EPL and EPLED sources in a PL spectrometer will cover most research needs.

HPLs are pulsed diode lasers which can operate at repetition rates of up to 80 MHz and offer two operation modes: standard operation, similar to EPL lasers, and high power operation. In high power mode, HPL lasers produce pulses up to 50 times more intense than in standard mode, while maintaining a pulse duration under 1 ns. This is particularly useful for samples with low photoluminescence quantum yield (PLQY) and lifetimes longer than a few nanoseconds, which do not require very high temporal resolution. Similar to EPL and EPLED sources, HPL can be used in both TCSPC and MCS mode.

VPL and VPLED sources are designed to operate in MCS mode and are the ideal choice for PL decay lifetimes from ~100 ns to seconds. Their output is a square pulse whose length is controlled with a dial on the source and spans a wide range from 50 ns up to 1 ms, with an option for continuous (CW) emission.  As well as acting as a bright, monochromatic source for phosphorescence lifetime, they can be used for excitation of steady-state photoluminescence in CW mode.

The choice of excitation source depends on the sample decay characteristics. Examples of popular research areas using a variety of Edinburgh Instruments pulsed sources are shown below.

Halide perovskites are a popular material in solar cell research, having attracted a great deal of attention in recent years. In a perovskite solar cell, light absorption generates charge carriers which then diffuse towards the electrodes. Optimising the efficiency of the cell involves minimising carrier recombination, and therefore characterising the PL lifetime of the perovskite material.1

Measuring PL lifetimes of perovskites can be challenging due to several factors. Photoluminescence decays are a combination of fast (ns) components and a long (µs) tail. This means they should be measured in TCSPC mode, to better resolve the fast components, but with a low laser repetition rate to capture the full tail of the decay. The combination of TCSPC and low repetition rate results in relatively slow data acquisition. Besides, some perovskite samples may undergo degradation over the course of the measurement, or present low photoluminescence quantum yields and therefore long acquisition times. 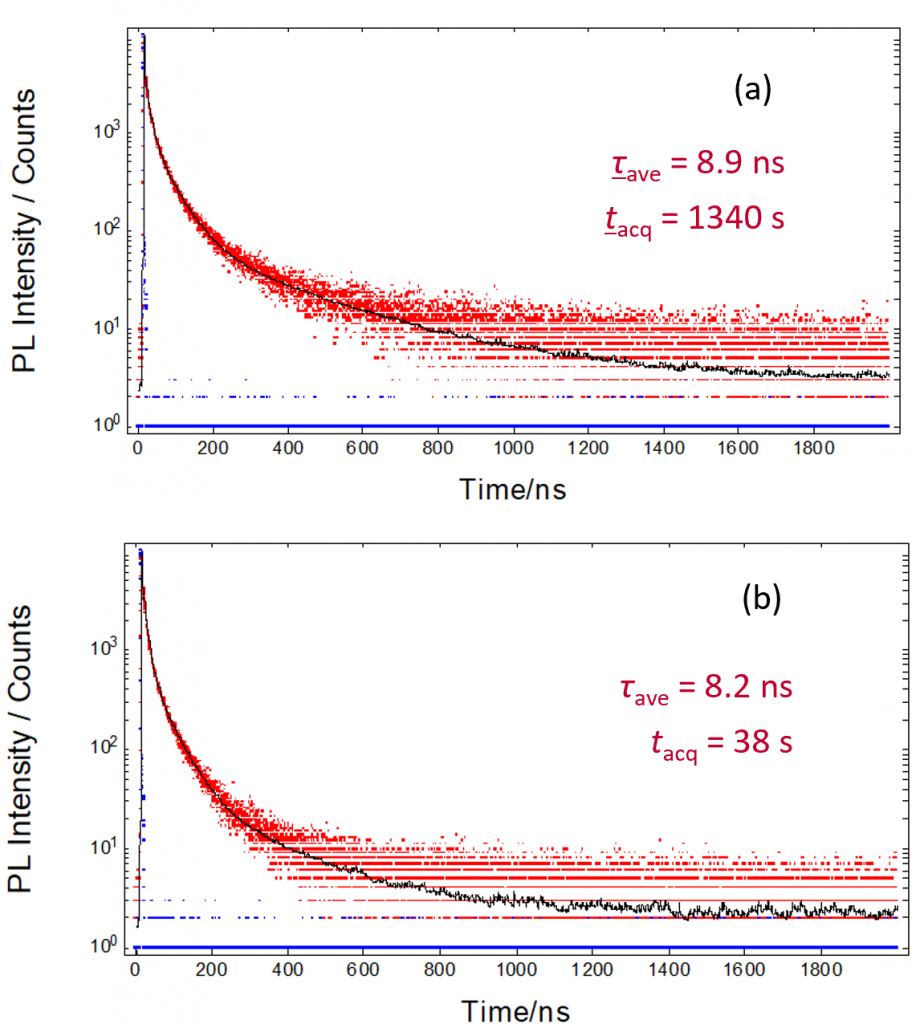 Figure 2 TCSPC decays of a perovskite sample acquired in an FLS1000 spectrometer with (a) EPL-405 laser or (b) HPL-405 laser for excitation: experimental decay (red), IRF (blue), and fit result (black). All other measurement conditions were identical. Fitted average lifetime τave and acquisition time tacq are indicated in the graph.

Bioimaging experiments typically involve fluorescence probes that can stain the sample and be observed under a microscope. Some desirable features of bioimaging probes are biocompatibility, ease of functionalisation and absorption and/or emission between 650 and 1350 nm (this is known as the NIR biological window because tissue is less absorbing at these wavelengths). Quantum dots are some of the most promising materials being developed as imaging probes. Their size and composition can be varied to fine-tune their chemical properties and excitation/emission ranges.

Ag2S quantum dots, with their emission spectra in the NIR range, are suitable for bioimaging experiments. These samples are often studied in suspension at low concentration so their photoluminescence signal is relatively low. In addition to this, photon-counting NIR detectors are less sensitive than their visible counterparts. For these reasons, using a HPL laser instead of an EPL is recommendable to speed up the acquisition. Figure 3 shows a TCSPC decay of Ag2S quantum dots in toluene measured at 1170 nm. The sample presented low brightness and would have required >1 h to measure with an EPL diode laser, in contrast, the decay was acquired in 20 minutes with a HPL-670 source. 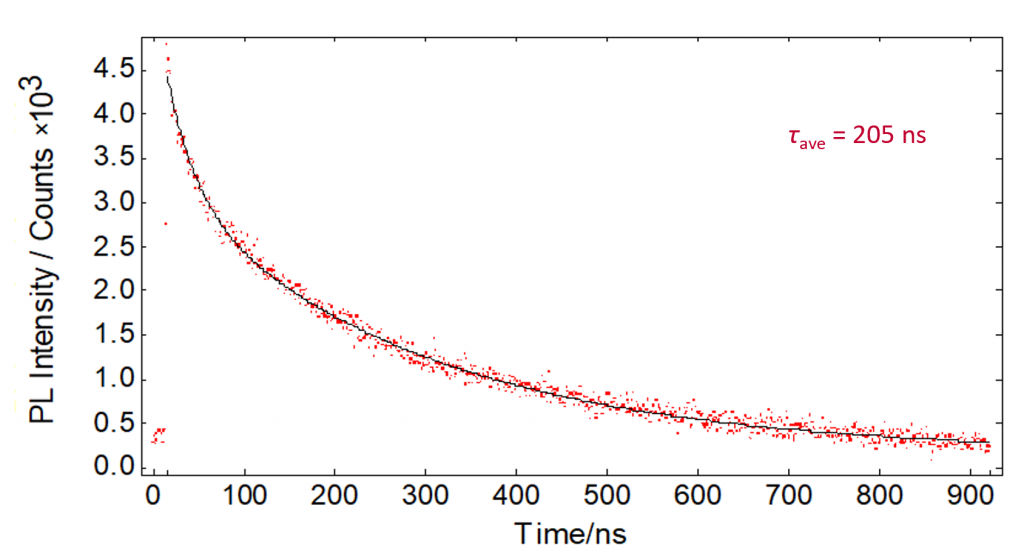 Figure 3 TCSPC decay (red) and exponential fit result (black) for Ag2S quantum dots in toluene, excited with a HPL-670 operating in high power mode at 1 kHz repetition rate in an FLS1000 spectrometer. The fitted average lifetime τave is shown in the graph.

Molecular oxygen in its singlet first excited state (1O2) has a variety of practical uses including photodynamic therapy and synthetic organic chemistry. A widespread approach to detect 1O2 is to measure its luminescence at 1270 nm.2 However, singlet oxygen phosphorescence is notoriously weak and can be challenging to measure at low concentrations. Besides sensitive NIR detectors, a powerful laser source is highly beneficial to these experiments.

Photoluminescence from 1O2 takes place in the microsecond scale and can therefore be measured by MCS using a VPL laser for excitation. Figure 4 shows a representative example where a VPL-445 laser was used to excite a solution of tetraphenylporphyrin (H2TPP) photosensitiser in toluene. H2TPP excited by the laser transfers its energy to oxygen molecules in solution, generating 1O2 which slowly decays to its ground state emitting luminescence. In Figure 4, the luminescence signal rises during the 50 µs excitation pulse from the VPL source, and decays over the next ~100 µs while the laser is off. 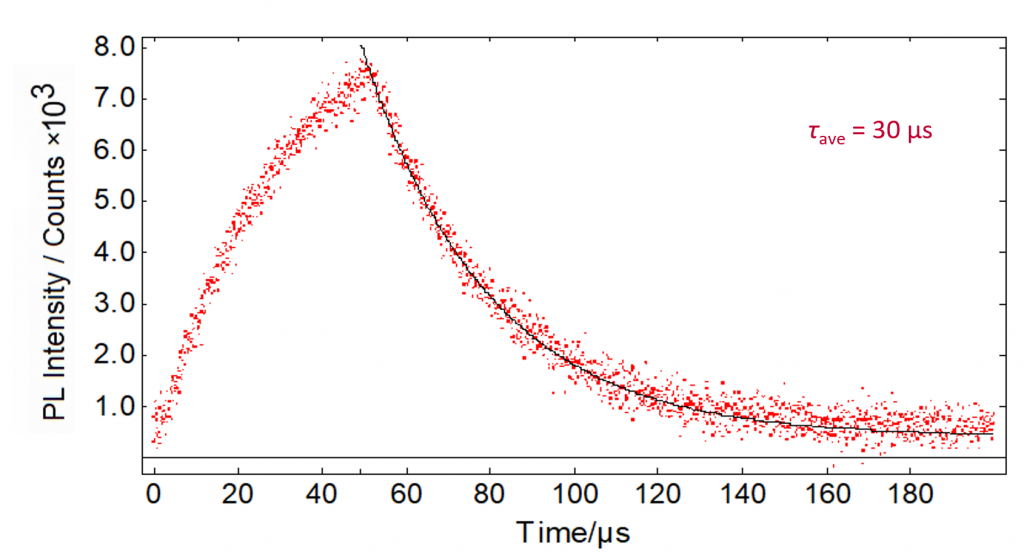 Figure 4 MCS decay (red) and 1270 nm exponential fit result (black) for a solution of H2TTP in toluene excited with a VPL-445 in an FLS1000 spectrometer. The VPL source operated produced 50 µs pulses at 5 kHz repetition rate. The fitted average lifetime τave is shown in the graph.

VPL and VPLED sources are designed for time-resolved experiments, but they can also be used in CW mode to acquire PL emission spectra. The most common configuration for these types of experiments involves a Xe lamp coupled to an excitation monochromator but, if the excitation wavelength does not need to be tuned, a VPL laser may be considered instead. Depending on the wavelength and bandwidth used, a VPL can be more intense than the Xe lamp option. This is illustrated in Figure 5, which shows PL emission spectra of Ag2S quantum dots acquired in an FS5 Spectrofluorometer with a 150 W Xe lamp, VPL-635, and HPL-670 as excitation sources. 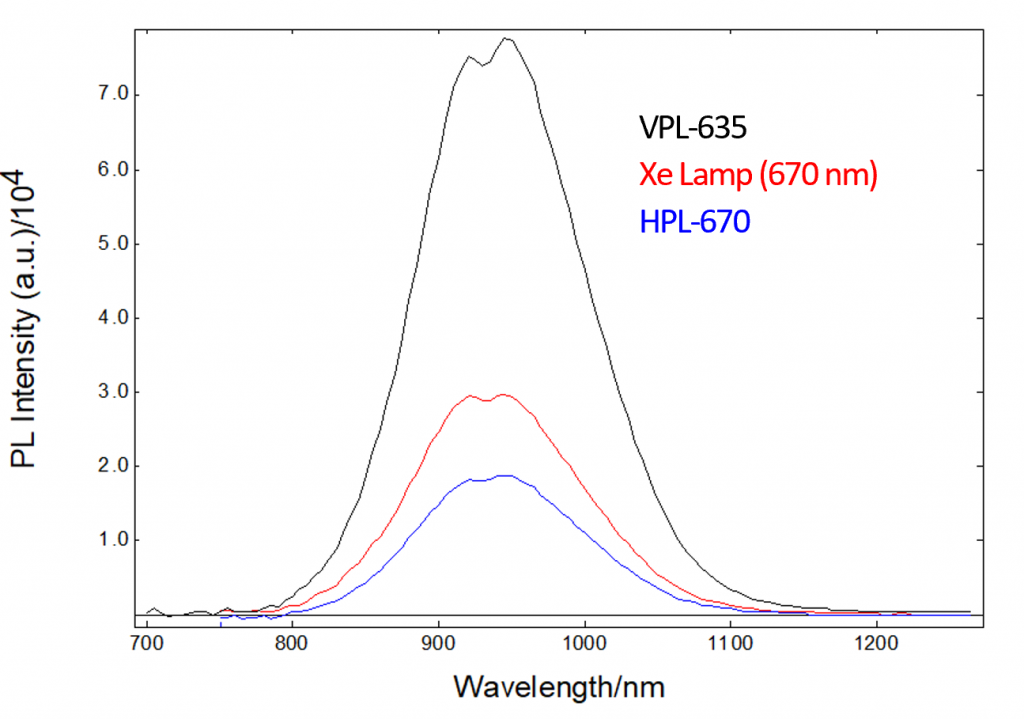 Figure 5 Photoluminescence emission spectra from Ag2S quantum dots in toluene acquired in FS5 Spectrofluorometer with Xe lamp, VPL-635 and HPL-670 for excitation. An excitation bandwidth of 10 nm was employed for the Xe lamp spectrum. The VPL-635 data were acquired with the laser operating in CW mode, and the HPL-670 data with the laser running at 80 MHz in high power mode. All other measurement conditions were identical between curves.

The choice of light source for a photoluminescence experiment is determined by the type of samples to be studied, the instrumentation available for detection and the user’s needs regarding acquisition speed. The wide range of Edinburgh Instruments pulsed sources offer flexibility to fine-tune the experiment to their specific needs, optimising pulse width and energy and reducing the acquisition time.

Find out more about our Picosecond Pulsed Sources. If you would like to talk to one of our sales team and find out how they can be used within your own research, please contact us. We’d be delight to help.