Time Correlated Single-Photon Counting (TCSPC) is the method of choice for fluorescence lifetime measurements. The TCSPC technique outperforms all other techniques in sensitivity, dynamic range, data accuracy and precision.

TCSPC measures single photons, therefore detection is at the quantum limit. The technique requires an excitation source with high repetition rate pulsed output. As the process of capturing a single photon is repeated several thousand or even a million times per second, a sufficiently high number of single photons is processed for the resulting fluorescence lifetime measurement.

Only one photon is processed at a time, so the light pulses required for sample excitation have low pulse energy. This causes minimal sample degradation and avoids many non-linear sample effects.

TCSPC is a time domain technique. Data is accumulated, presented and analysed in a format showing signal intensity versus time, usually in picoseconds, nanoseconds, or microseconds. The presence of multi-exponential or more complex decay kinetics can be seen when viewed in a semi-logarithmic scale (fig. 1). 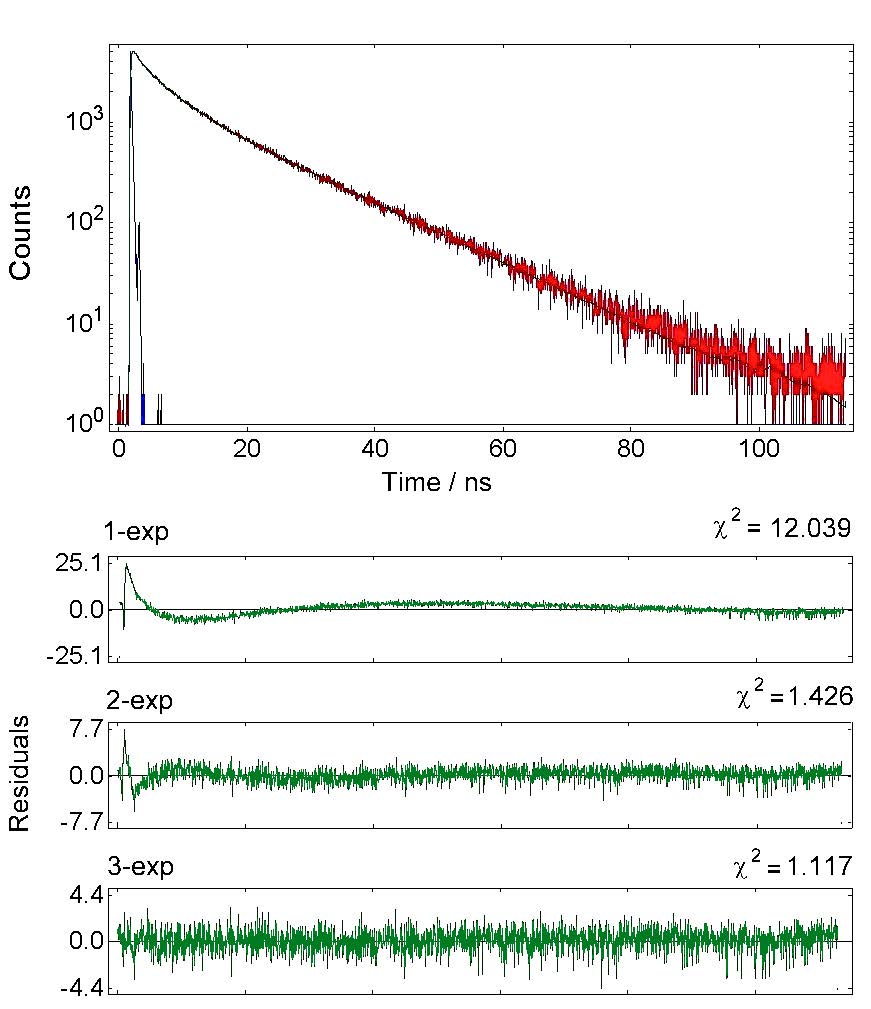 TCSPC provides the highest time resolution among techniques using single photon detectors. This distinguishes it from up-conversion, autocorrelation techniques and streak cameras. The distinct advantage of TCSPC is that this technique does not use the analogue detector response to produce the instrumental response function (IRF). The jitter in the rising edge of the detector analogue response dictates the width of the IRF. The rising edge jitter of photomultiplier detectors (caused by the photo-electron transit time spread) is typically only 10% of the analogue pulse.

Time Correlated Single Photon Counting (TCSPC) is a counting technique, thus principally a digital technique rather than an analogue one. The only relevant data noise is the Poisson noise (or counting noise). The Poisson noise is well defined and is precisely the square-root of the data point. If one would get only one single data point (out of the decay curve) one could readily draw in the error bar for the standard deviation. The fact that we know precisely the noise has big consequences for numerical data analysis, where each data point
needs to be properly weighted. The fact that the noise is Poissonian has big consequences for the dynamic range.

The dynamic range of the measurement is typically 104:1, as a single photon can be observed as well as the signal maximum (typically 104). It can even be bigger if data are acquired beyond 10,000 counts in the maximum.

TCSPC covers lifetimes of over 7 orders of magnitude. Instrumental response functions of less than 50 ps (5×10-11s) are obtained with a combination of the fastest detectors on the market (MCP-PMTs) and mode locked lasers. Numerical reconvolution enables fluorescence lifetimes of less than 5 ps (5×10-12 s) to be recovered. The upper limit of the lifetime range is given by the repetition rate of the exciting pulsed light source, the dark count level of the detector, and the time one wants to spend to acquire the data (low pulse repetition rate and same number of acquired counts means long measurement time). 50 ms (5×10-5s) is a typical upper limit.

TCSPC is (over a wide range) insensitive to fluctuations in pulse amplitudes of the excitation light source; to fluctuations of the detector output pulses and to background noise of the detector. For many detectors, the background (which also obeys Poisson statistics) is largely eliminated by a threshold allowing only pulses of a certain pulse amplitude (photon pulses) to be processed. The constant fraction discriminator evaluates the pulse’s temporal position by the fastest rise of the pulse. Thus pulses of different pulse height amplitudes still start (or stop) the “clock” at the same time. Pulse height fluctuations either by light source instabilities or by the intrinsic pulse height fluctuation characteristics of photomultipliers are largely irrelevant.

This blog post follows an introduction to Time Correlated Single Photon Counting, which answers the question; What is TCSPC?

Edinburgh Instruments offers multiple solutions for the measurement of Time Correlated Single Photon Counting, including our FLS1000 Photoluminescence Spectrometer, and our FS5 Spectrofluorometer. To learn more about these products, why not contact a member of our sales team at sales@edinst.com.

If you have enjoyed reading about Time Correlated Single Photon Counting (TCSPC), and want to