Quantum dot light emitting diodes (QLEDs) have attracted immense research interest from both academia and industry due to their desirable display properties. The linewidth of the emission from quantum dots (QDs) is significantly narrower than from organic molecules which means that QLEDs can potentially offer displays with higher colour gamut than OLEDs.

QLEDs are also being investigated for use in lighting and high brightness applications such as projection displays, car headlamps and outdoor signage. For these applications, the maximum brightness of QLEDs must be significantly increased.

QLEDs suffer from a problem known as efficiency roll-off. When the brightness of QLEDs is increased past a certain threshold the efficiency starts to drop (roll-off) which limits the maximum brightness that can be practicably achieved. One of the causes of efficiency roll-off is Joule heating. To achieve high brightness a high current density is required which generates a significant amount of heat inside the QLED, raising the device temperature. At high current densities, the temperature inside the QLED can easily reach temperatures in excess of 100°C. This elevated temperature causes’ efficiency roll-off since the photoluminescence quantum yield of the quantum dots decreases with increasing temperature due to the de-bonding of QD surface ligands and the introduction of surface trap states. To achieve high brightness QLEDs thermal management and thermal stability, therefore, need to be improved.

Towards Efficient and Ultrabright QLEDs

Solving this problem was the goal of Sun et al who recently published an investigation into the thermally induced efficiency roll-off of QLEDs in ACS Nano and reported the highest QLED brightness ever achieved.1 In this research Sun et al. used the FS5 Spectrofluorometer equipped with the SC-80 cryostat module to investigate the temperature behaviour of two quantum dot emitters with different surface ligands. 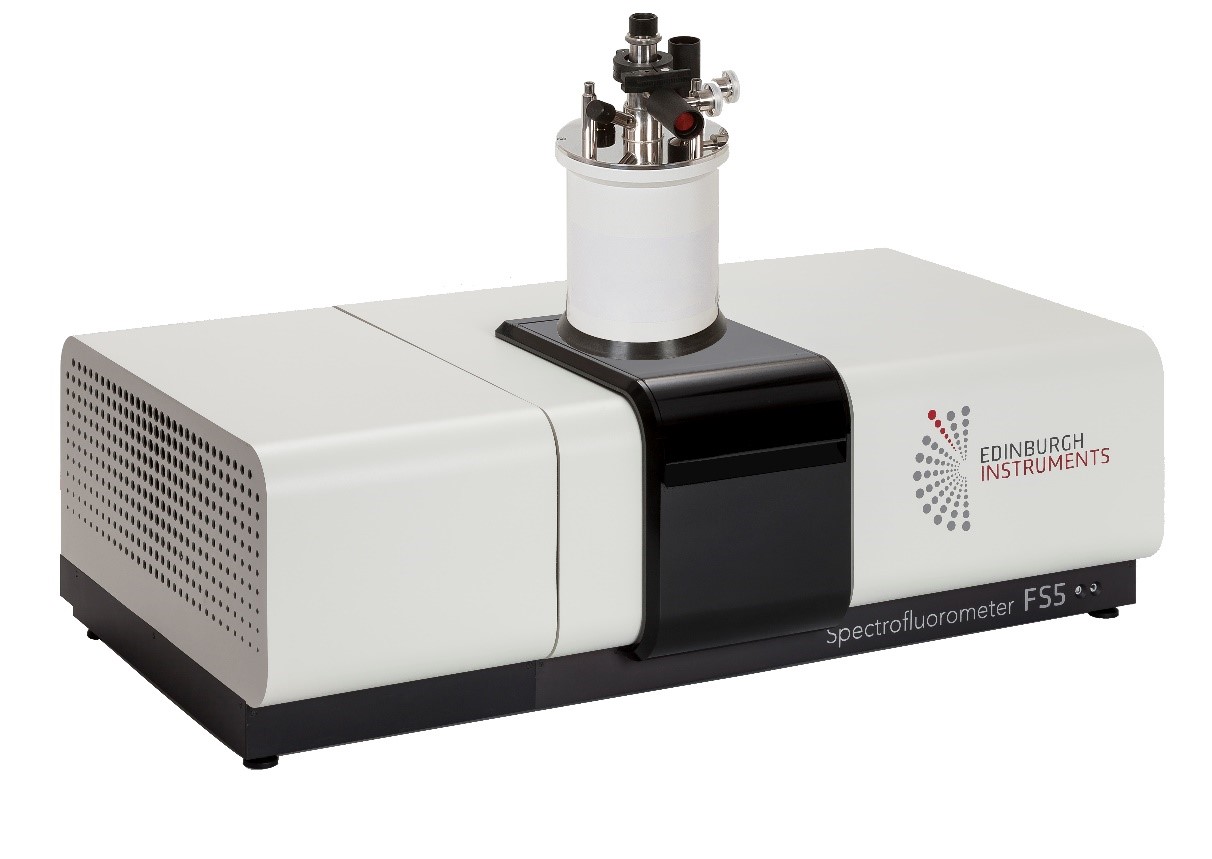 QDs are coated in organic surface ligands which passivate the surface of the dot and improve performance. One of the most popular ligands is oleic acid (OA) which is bonded to the surface of the QD through a carboxylic acid group (Figure 2 left). To investigate whether the de-bonding of the surface ligands was responsible for the efficiency roll-off Sun et al. fabricated QDs with OA ligands and DDT ligands which attach to the QD through a stronger sulphur bond (Figure 2 right).

In Figure 3c the same measurement is repeated for QDs with DDT ligands (QD-DDT). The photoluminescence intensity of QD-DDT is also quenched upon heating but to a lesser extent, retaining 70% of its room temperature value. Furthermore, upon cooling a portion of the quenching is reversible and the photoluminescence recovers to 85% of its initial. These results suggest that QDs with DDT ligands are more thermally stable than OA ligands. 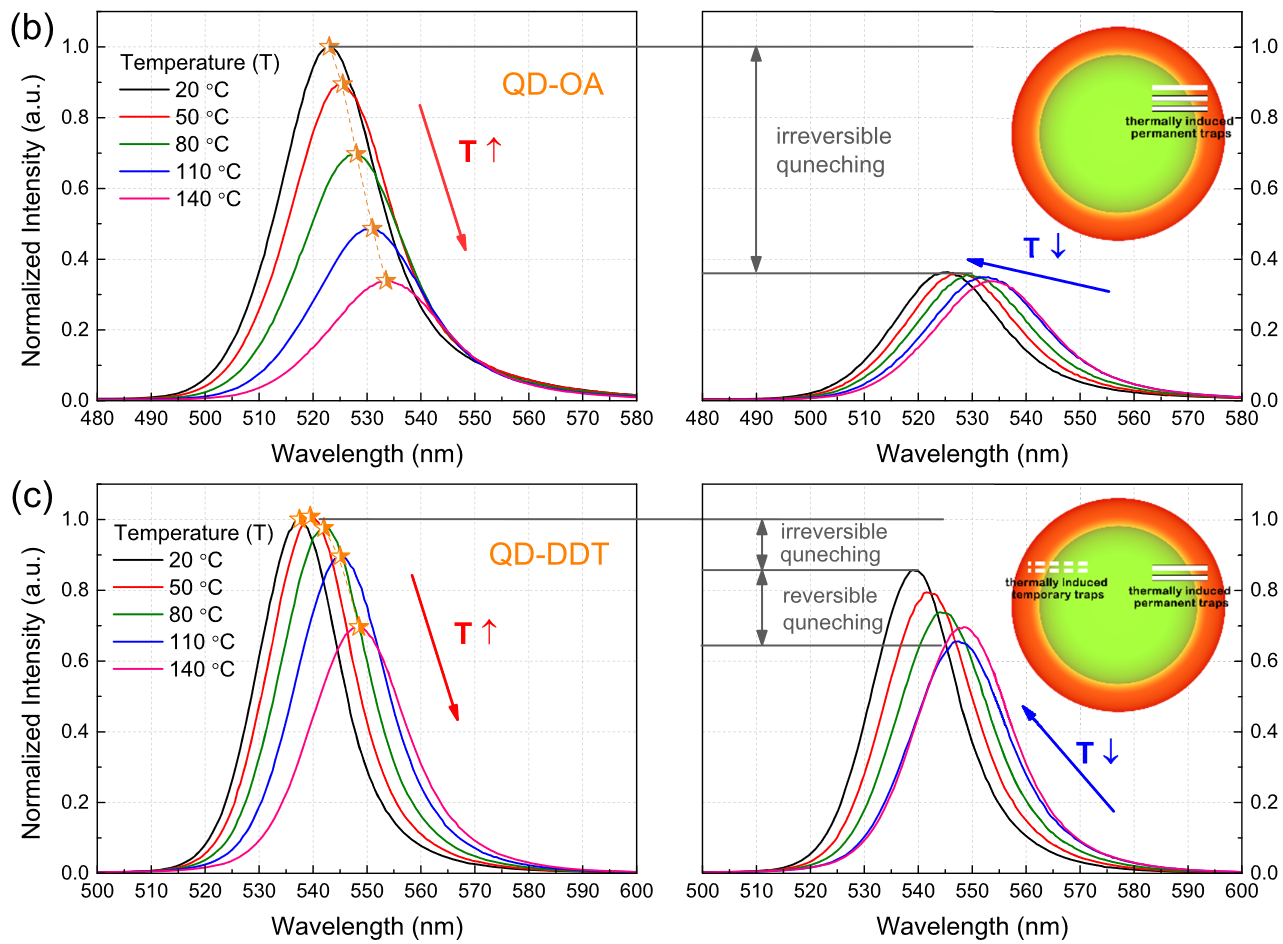 To gain a greater understanding of the recombination dynamics inside the QDs, Sun et al. measured the photoluminescence decays of the two QDs using the FS5’s TCSPC lifetime capability (Figure 4). Both QDs exhibit biexponential decays which was attributed to the excitons in the QD recombining through two independent channels: band-to-band recombination and thermally assisted recombination on the surface.

In QD-DDT the proportion of excitons undergoing thermally assisted recombination also increases with temperature, however, in contrast to QD-OA; the lifetime of the thermally-assisted recombination component actually increases with temperature suggesting that these excitons are not quenched by surface trap states. Furthermore, the photoluminescence lifetime recovers to close to its original value when the sample is cooled, in agreement with the reversibly exhibited in the steady-state spectra. 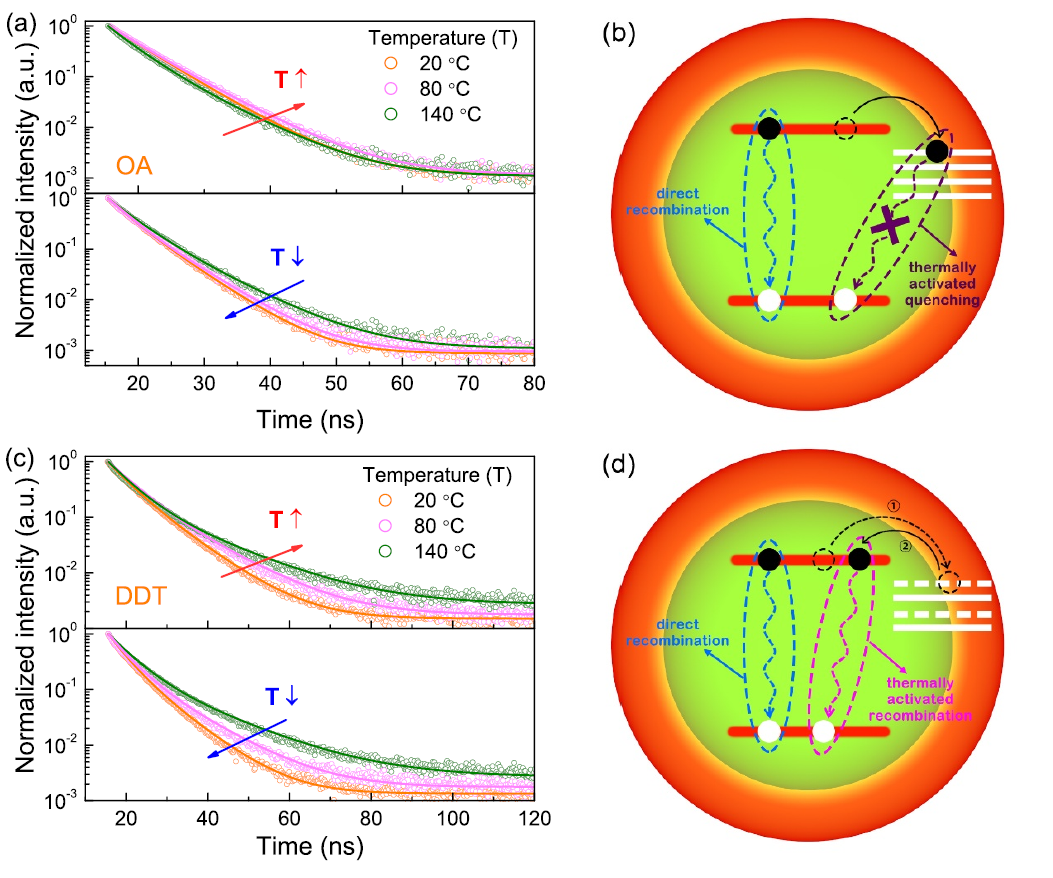 Together the steady-state and time-resolved results show that DDT ligands have superior thermal stability, and the work by Sun et al. establishes ligand de-bonding as an important source of efficiency roll-off in QLEDs. For more information about this work, read the full text on ACS Nano.

The research by Sun et al. was carried out using our compact FS5 Spectrofluorometer. For more information about this spectrometer and how it can be customised to meet your research needs please contact us.