Congratulations to our customer, Professor Arjan J. Houtepen and his research group at Delft University of Technology, who recently had their paper “Finding and Fixing Traps in II−VI and III−V Colloidal Quantum Dots: The Importance of Z‑Type Ligand Passivation” published in JACS.1 In this research highlight we will discuss the importance of Prof. Houtepen’s work on colloidal quantum dots and the photoluminescence (PL) spectroscopy techniques that were used in their recent paper.

Colloidal quantum dots (QDs) have been subject to intense research attention due to their high photoluminescence quantum yield (PLQY) and size dependent optoelectronic behaviour which enables precise control over their absorption and emission properties. However, QDs suffer from surface trap states which can dramatically influence their optoelectronic properties. These trap states act as non-radiative recombination centres and the competition between the radiative and non-radiative pathways lowers the PLQY of the dot (Figure 1 left).  Passivation of the surface of the dot with ligands is a well established method to reduce the density of surface trap states and prevent non-radiative recombination and therefore increase the PLQY of the dot (Figure 1 right).

Currently employed passivation strategies are based on trial and error without a solid theoretical basis and there is no general experimental approach to tune the trap density in colloidal quantum dots. The work by Houtepen et al. is a systematic investigation of the effect that passivation with different types of Z-ligands (Lewis acids) has on the photoluminescence; with the aim of greater understanding of the chemistry behind trap passivation and fostering the development of a general passivation strategy.

There are two main spectroscopic measurements that can be used to measure the degree of trap passivation in QDs; the PLQY and the PL lifetime. To measure the PLQY Houtepen et al.  used an FLS980 Photoluminescence Spectrometer equipped with an integrating sphere. An integrating sphere measures all photons that are scattered and emitted by a sample and enables an absolute measurement of the PLQY of the QD solutions. Since the goal of ligand passivation is the enhancement of dot brightness (PLQY) the measurement of the PLQY therefore provides a direct measure of the success of the passivation strategy.

Figure 2: FLS1000 Photoluminescence Spectrometer and the integrating sphere accessory for the absolute measurement of photoluminescence quantum yield. The FLS1000 is the successor to the FLS980 used by Houtepen et al.

The second method of investigating the trap states is by measuring the PL lifetime. In the absence of trapping, the QD will remain in the photoexcited state for a lifetime, τ, before radiatively recombining back to the ground state. When there are surface trap states there will be additional non-radiative recombination channels which will remove population from the photoexcited state and decrease the measured lifetime τ. Successful ligand passivation will therefore increase the PL lifetime of the QD. The PL lifetime was measured using time-correlated single photon counting (TCSPC) using the Lifespec II Fluorescence Lifetime Spectrometer equipped with a 405 nm pulsed diode laser (EPL405). 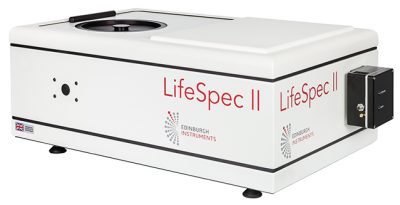 To systematically test the effect that the choice of ligand treatment has on the PLQY, different ligands were applied to an initial CdTe core and the PL spectra, quantum yield and lifetime measured. The CdTe core has a PL peak at ~ 625 nm and a PLQY of 8% (Figure 4B). Treatment with the ligands CdCl2 and InCl3 red shifts the emission and raises the PLQY to 73% and 90% respectively. In Figure 4C it can be seen that this increase in the PLQY is accompanied with a corresponding increase in the PL lifetime which confirms that non-radiative recombination pathways are being removed.

Figure 4: Absorption spectra, PL spectra and PL lifetime of CdTe QDs with different ligands. OAM is shown as a control since it was used to solubilize the InCI3 and CdCI2 ligands.1

The enhancement of the PLQY upon ligand treatment is a general trend across all MCln ligands (Figure 5A) though the effect is most pronounced for CdCl2, ZnCl2 and InCl3. The choice of ligand anion also has a significant influence on the PLQY with chlorine ligands providing the largest PLQY increase (Figure 5B). The trend in PLQY with different anions shown in Figure 5B can be primarily explained through steric hindrance. Small compact ligands can more easily access the surface of the dot and therefore provide better surface coverage resulting in less trap density and higher PLQY. MCln ligands are the most compact and therefore offer the best surface coverage and highest PLQY. 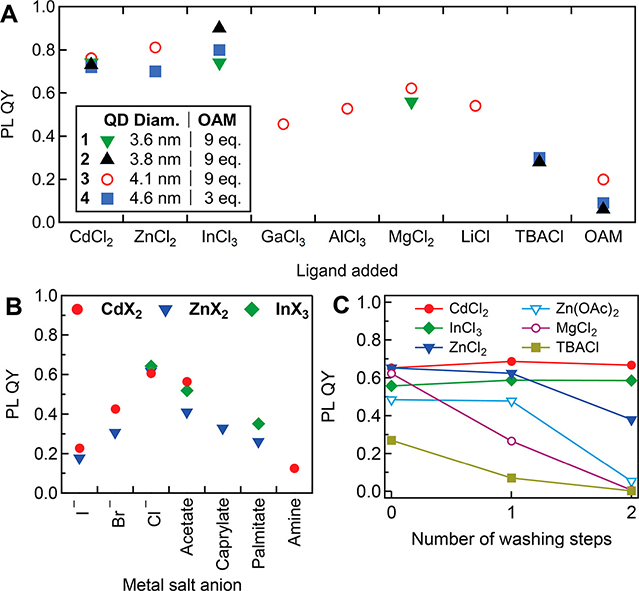 Figure 5: Influence of the choice of ligand on the PLQY.

We hope this research highlight has given a taste of Prof. Houtepen’s work and the power of photoluminescence spectroscopy for investigating and optimising the effect of different ligand treatments to improve the performance of quantum dots. For further information on this work and how these PL results were combined with other characterisation techniques and theoretical modelling to get a more complete picture of surface passivation, download the full paper from the American Chemical Society.

The figures in this research highlight were reused with permission from the American Chemical Society (ACS). The article is licensed under ACS AuthorChoice via CC-BY-ND 4.0 and further figure reuse should be requested from ACS directly.

To find out more about how our instrumentation can help you with your research requirements, contact a member of our team at sales@edinst.com.

If you have enjoyed reading our publication highlight on Colloidal Quantum Dots, and want to be the first to see the latest news, products and applications from Edinburgh Instruments then why not sign-up to our infrequent newsletter via the button below, and join us on social media.