With perovskite being such a hot topic at the moment Halide perovskite photovoltaic cells have attracted tremendous attention due to the rapid rise in solar cell efficiencies, and their potential for providing high-efficiency low-cost solar power. Solar cell efficiencies have increased from 9% in 2012 to 21% in 2017, and are now competitive with traditional crystalline silicon cells. In this blog post we highlight our recent application notes which focus on perovskites and their reactions to various photoluminescence spectroscopy measurements.

In this application note, time-resolved photoluminescence spectroscopy is shown to be a powerful tool for investigating and optimising the behaviour of perovskite through the measurement of charge carrier lifetimes. The most widely studied and most promising photovoltaic material is methylammonium lead iodide, or MAPI for short. The crystal structure of this is shown below;

The charge carrier lifetime of MAPI perovskite films was measured using time-resolved photoluminescence spectroscopy with an FLS1000 Photoluminescence Spectrometer. The decay kinetics were fit with stretched exponentials using the FAST software package. The influence of annealing on the carrier lifetime was investigated by measuring the PL decay of perovskite films fabricated with different annealing times.

Another particularly promising application of perovskites is the creation of a solid-state white-light emitter. In current commercially available solid-state white-light sources, a combination of multiple light emitting diodes and phosphor coatings must be used to generate the white emission. In this application note, the properties of a white-light emitting 2D perovskite are characterised with steady state and time-resolved photoluminescence spectroscopy using an FLS1000 Photoluminescence Spectrometer.

An example of a 2D perovskite is α-(DMEN)PbBr4 which is a promising white-light emitter; the structure of which is shown in Figure 2:

Figure 2: Crystal structure of α-(DMEN)PbBr4 and the organic cation 2-(Dimethylamino)ethylamine

Accurately determining the photophysical properties of perovskite emitters such as α-(DMEN)PbBr4 can be challenging. To obtain accurate emission spectra, we recommend using our FLS1000.

Despite the high efficiency of hybrid halide perovskites, further research into the fundamental physics and stability of these materials is required. One important area of research is understanding how temperature affects the properties of the perovskite. In this application note the temperature dependence of the photoluminescence of methylammonium lead iodide perovskite is investigated using the FLS1000 with the liquid nitrogen cryostat accessory.

The term perovskite refers to any compound which has an ABX3 crystal structure, where A and B are two different cations and X is the anion. As previously mentioned, MAPI is the highest performing and most widely studied perovskite, and can adopt 3 different phases of the crystal structure.

Figure 3: The unite cells of the cubic, tetragonal and orthorhombic phases of MAPI perovskite. The lead cation (blue) is located in the centre of a cube of methylammonium cations (green) and is surrounded by an octahedron of iodide anions (red).

The temperature dependence of the photoluminescence of MAPI perovskite was investigated using an FLS1000 Photoluminescence Spectrometer equipped with the liquid nitrogen cryostat accessory.

One of the most important photophysical parameters of perovskites for optoelectronic applications is the photoluminescence quantum yield (PLQY). In this application note this is investigated using the FLS1000 Photoluminescence Spectrometer equipped with the Cryosphere accessory. To measure the temperature dependence of PLQY Edinburgh Instruments has developed a variable temperature integrating sphere, the Cryosphere (left), which is capable of measuring the PLQY of solid samples over a temperature range of 77 K to 500 K. By using an integrating sphere, both the change in absorption coefficient and change in PL intensity with temperature are accounted for. In this application note, the temperature dependence of the PLQY of the perovskite emitter CsPbBr3 is measured using the FLS1000 with the Cryosphere accessory. 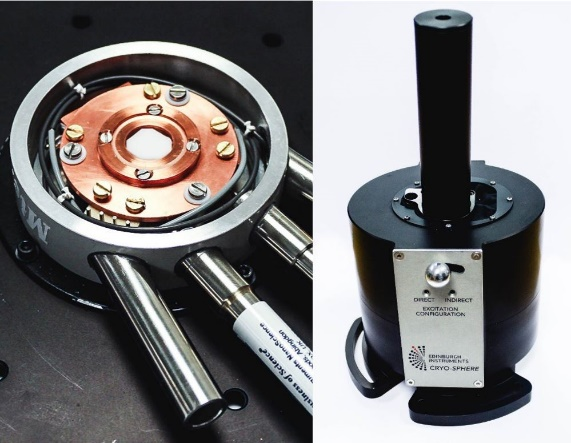 The influence of temperature on the photoluminescence quantum yield of CsPbBr3 perovskite was investigated using the Cryosphere accessor for the FLS1000. The PLQY was found to increase from 0.02% to 0.43% as the perovskite was cooled from 200 K to 80 K which corresponds to a suppression of non-radiative recombination mechanisms. This application note demonstrates that the Cryosphere is a powerful tool for investigating how the loss of mechanisms in optoelectronic devices are influenced by temperature. 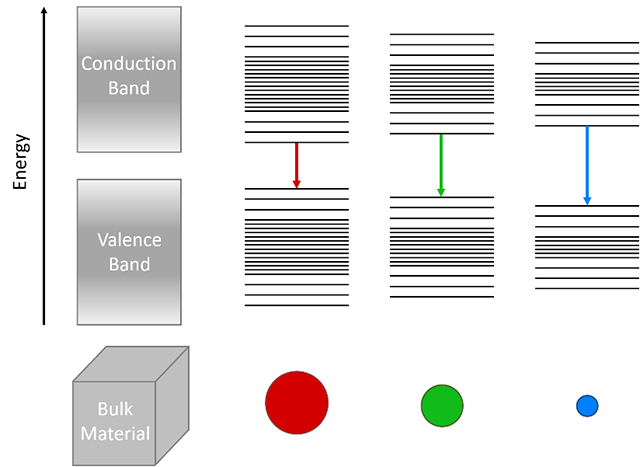 Figure 5: The influence of particle size on the band gap and photoluminescence emission wavelength of quantum dots due to quantum confinement.

The photophysics of two halide perovskite quantum dots, known as PQD-A and PQD-B, were investigated using the FS5 which contains an absorption detector as standard which enables the photoluminescence and absorption spectra to be measured using a single instrument.

The absorption and emission spectra of the perovskite quantum dots revealed that peak emission wavelengths were at 450 nm and 514 nm, and coincided with the band edge of the dots. The SC-30 Integrating Sphere module was used to calculate the PLQY with the 450 nm emitting dot was found to have poor PLQY of only 3%. Meanwhile, the 514 nm emitting dot had an excellent PLQY of 54%.

If you are interested in furthering your perovskite research, Edinburgh Instruments offers a range of fluorescence spectrometers suitable for a wide variety of applications. In the list of application notes mentioned, research was conducted using our FLS1000 Photoluminescence Spectrometer and our FS5 Spectrofluorometer. To learn more about how these instruments can help propel your research, contact a member of our team at sales@edinst.com.