Jablonski Diagram | What is it? | Edinburgh Instruments

The Jablonski diagram is widely used in fluorescence spectroscopy to illustrate the excited states of a molecule and the radiative and non-radiative transitions that can occur between them.

History of the Jablonski Diagram

However, the diagram is more correctly called a Perrin-Jablonski diagram to recognise the important contributions in its development by French physicists Jean Baptist Perrin, winner of the 1926 Nobel Prize in Physics, and his son Francis Perrin who both contributed greatly to the theory of fluorescence in the 1920s and 1930s.2,3 Jean Perrin introduced the concept of resonant energy transfer between molecules and developed a theory to explain thermally activated delayed fluorescence.3 Francis Perrin arguably made an even larger impact to fluorescence theory than his father, by developing the active sphere model for quenching, establishing the relationship between fluorescence quantum yield and lifetime and the theory for fluorescence polarisation.3

Jean Perrin was likely the first person to use a molecular energy level diagram to illustrate the absorption and emission of light, which he used to explain the concept of thermally activated delayed fluorescence by introducing a ‘metastable state’.4 This model and diagram was then explained in greater detail in Francis Perrin’s doctoral thesis.4 The key contribution of Jabłoński to the development of the diagram was allowing a radiative transition from the metastable state back to the ground state, resulting in a second emission pathway that occurs at longer wavelength (phosphorescence). The final development was the work by A. Terenin, G. N. Lewis and M. Kasha who established that the metastable state was, in fact, the triplet state.4 The modern diagram could, therefore, be most accurately called a Perrin-Jablonski diagram modified by Terenin, Lewis and Kasha.

How to Interpret a Jablonski Diagram

S0 is the singlet ground state of the molecule

The coloured arrows represent the various transitions that can transfer energy between the molecular states and are split into radiative and non-radiative transitions.

Radiative transitions are transitions between two molecular states where the energy difference is emitted or absorbed by photons and are represented in a Jablonski diagram by straight arrows.

Non-radiative transitions are transitions between two molecular states without the absorption or emission of photons and are represented in a Jablonski diagram by undulating arrows.

A radiative transition from a lower to a higher electronic state of a molecule. The energy of the photon is converted to the internal energy of the molecule.

A molecule is promoted from its ground state to a higher state by absorption of a photon which is represented by the blue arrows in Figure 2. It is the fastest transition in the Jablonski diagram, occurring on a timescale of order 10-15 s. At room temperature, the majority of molecules in a population will be in the lowest vibrational level of the ground state (Boltzmann distribution) and absorption is therefore shown to start from this level. Absorption of a photon promotes the molecule from the So to one of the vibrational levels of the singlet excited states (S1, S2,…). Direct excitation to the triplet excited states (T1, T2,…) is not possible due to conservation of angular momentum.

A non-radiative transition to a lower vibrational level within the same electronic state.

After a molecule has been promoted to an excited state by absorption, it is in a non‑equilibrium state and will eventually dissipate the energy that it has gained and return to the ground state. The first way that energy is lost is through vibrational relaxation (orange arrows); where excess vibrational energy is lost to vibrational modes within either the same molecule (intramolecular) or to surrounding molecules (intermolecular) until the lowest vibrational level of the electronic state is reached. Vibrational relaxation occurs on a rapid time-scale of 10-12 – 10-10 s and outcompetes all other transitions.

A non-radiative transition between two electronic states of the same spin multiplicity.

A radiative transition between two electronic states of the same spin multiplicity.

The emission of photons from the S1 → S0 radiative transition is known as fluorescence which occurs on a timescale of 10-10 to 10-7 s and is shown by the green arrows in Figure 2. As a consequence of the rapid vibrational relaxation and internal conversion processes described above the fluorescence occurs, with some exceptions, from the lowest vibrational level of the first electronic excited singlet state to the singlet ground state. This energy loss prior to fluorescence is the physical origin of the famous Kasha’s Rule which states that: “luminescence (fluorescence or phosphorescence) only occurs with appreciable yield from the lowest excited state of a given multiplicity”.5 It is also responsible for the Stokes-Shift; where the fluorescence occurs at a longer wavelength than the absorption.

In thermally activated delayed fluorescence (TADF) the molecule transitions from the T1 state back into the S1 state through reverse intersystem crossing (rISC). The name comes from the fact that the rISC process is thermally activated as the molecule must possess enough thermal energy to overcome the energy gap between the S1 and the T1 states. For efficient reverse intersystem crossing to occur the energy gap should be comparable to the thermal energy, kT, which is approximately 25 meV at room temperature.  This mechanism is also known by the name ‘E-type delayed fluorescence’ as it was first observed in eosin.4 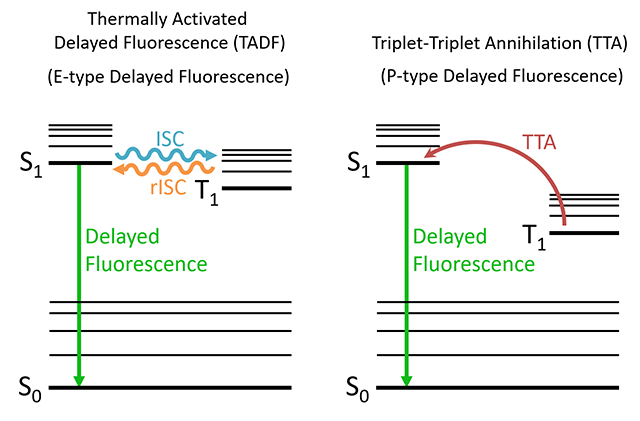 The second type of delayed fluorescence is triplet-triplet annihilation, where two molecules in the T1 state undergo energy transfer which promotes one molecule to the S1 state while the other returns to the S0. It is also known as P-type delayed fluorescence since it was first observed in pyrene.

Table 1: The characteristic lifetimes of the radiative and non-radiative transitions.

Jablonski diagrams are an invaluable tool for quickly visualising the energy loss pathways of photoexcited molecules and aiding in the interpretation of their fluorescence spectra. We hope this article has given you the knowledge required to interpret Jablonski diagrams and begin creating your own.

If you have enjoyed reading about the Jablonski diagram, and would like to be the first to see all the latest news and applications from Edinburgh Instruments then sign-up to our monthly newsletter via the button below, and join us on social media. For more on how our team are using the Jablonski diagram, contact a member of our team at sales@edinst.com.