Researchers at the University of California at Berkeley and Lawrence Berkeley National Laboratory, have demonstrated a mechanism that exploits surface quenching processes to magnify the luminescence of core-shell lanthanide-doped nanocrystals, featured in Nano Letters, an ACS Publication. This work, lead authored by Dr. Stefan Fischer conducting research under Prof. A. Paul Alivisatos, the Samsung Distinguished Chair in Nanoscience and Nanotechnology Research at Berkeley, precisely tuned the shell thickness around upconversion and downconversion b-NaYF4; Yb, Er nanoparticles with undoped b-NaLuF4 shells to quantify, understand, and enhance the luminescence properties associated with optimizing surface quenching through spectral and lifetime analysis. Upconversion and downconversion nanocrystals have been shown for their unique ability to shift wavelengths of light to higher or lower energies based on the lanthanide dopants and crystal host, with broad applications in quantum cutting, securities, biomedical imaging, and novel light emitting diodes, to name a few.

For this study, the researchers exploited an Edinburgh FLS980 Luminescence Spectrometer coupled to an Opotek Opolette laser to acquire spectral and lifetime properties of the enhanced upconversion and downconversion mechanism of these shell-enhanced lanthanide-doped nanocrystals. Dr. Stefan Fischer said, “The Edinburgh FLS980 allowed us to look at the time-dependent dynamics of every single transition of Er3+ and Yb3+ in our nanocrystals on a very reproducible and quantitative level which eventually enabled us to derive surface quenching rates for every energy level involved in the complex up- and downconversion mechanism. This enhanced understanding of the system’s dynamics allowed us to model a novel surface quenching assisted downshifting mechanism with a distinctive peak for a certain thickness of the inert shell. This distinctive peak is a result of the interplay between the different surface quenching rates which we have determined by exploiting the sensitivity of the FLS980 over a broad spectral range from the UV to the NIR.“

We are delighted our FLS980 Fluorescence Spectrometer provided the researchers the highest quality data possible for their work, and congratulate them for this contribution to the field. Please follow this link; http://pubs.acs.org/doi/abs/10.1021/acs.nanolett.6b03683 , to read the full paper. 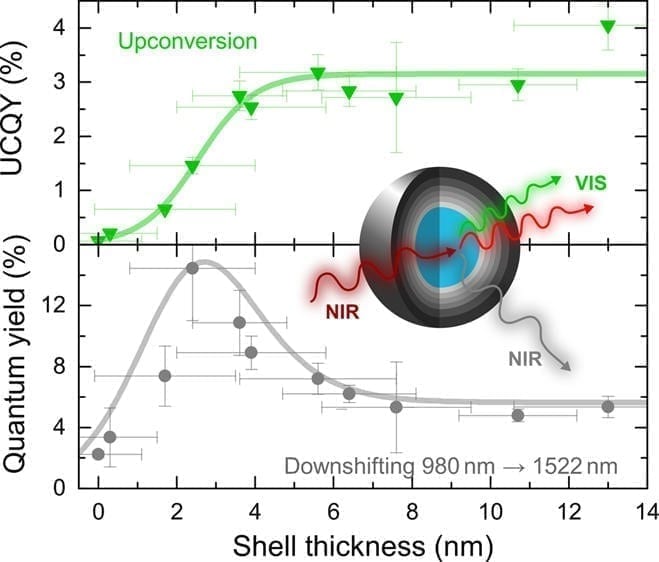